Romania’s ruling Social Democrats and thousands of supporters rallied outside government headquarters in Bucharest on Saturday in protest at alleged abuses of power by anti-corruption prosecutors.

The rally was seen as the ruling coalition’s response to a series of large anti-government street protests held against Social Democrat attempts to decriminalize several corruption offences via emergency decree last year. The popular outcry forced the Social Democrats to withdraw the decree.

Romania is one of the European Union’s most corrupt states and Brussels keeps its justice system under special monitoring.

The argument over how hard to fight corruption in Romania has dominated its politics since it joined the EU in 2007.

Anti-corruption prosecutors have secured a spate of convictions against lawmakers, ministers and mayors in recent years, exposing conflicts of interest, abuse of power, fraud and the awarding of state contracts in exchange for bribes.

But leading politicians, some of whom are currently under investigation or on trial, have denied wrongdoing and accused prosecutors of using their powers for political persecution.

India: Lawyers abstain from work over law and order situation in Delhi

Lawyers on Friday observed a complete strike in all six district courts in the national capital to protest against the law and order situation in Delhi after an attack on the residence of Shahdara Bar Association president.

Advocate Jaiveer Chauhan, secretary-general of the coordination committee of Delhi Bar Association, said the attack on the residence of Shahdara Bar Association president Pramod Nagar in Bhajanpura in northeast Delhi has raised security concerns, which is why lawyers collectively decided to abstain from work.

The strike hit judicial work in district courts at Patiala House, Tis Hazari, Saket, Rohini, Karkardooma and Dwarka. The lawyers, however, appeared for arguments in bail and custody cases.

“Nagar’s house was attacked with stones and several rounds of gun shots were fired at his house by 40-50 persons in retaliation to his request to four drunk persons not to make noise outside his residence late at night,” Chauhan said.

He said several rounds of gun shots fired fearlessly at someone’s house, showed their was no fear of law.

Revolutionary writer Varavara Rao on Thursday refuted allegations that he had arranged funding for Maoist attacks in the country. His name cropped up in one of three letters that surfaced after an alleged plot by Maoists to eliminate Prime Minister Narendra Modi was revealed.

One of the letters said Varavara Rao was given the responsibility of carrying out attacks and it noted that he had arranged for funds to be handed over to Surendra Gadling (who was arrested by Pune cops). It said in the meetings that were to be held in March-April Rao was to give guidance.

Varavara Rao told TOI, “All the three letters are concocted. My name didn’t figure in so-called assassination plot letter. They fabricated one of the letters (to show) that we’re talking about funds. I know Surendra Gadling as he dealt with the illegal detention of professor Saibaba. Surendra is a senior lawyer fighting so many cases why does he need money? I met him long ago. I know Rona Wilson too. A month ago they said they seized Rona Wilson’s laptop and came out with fabricated letters now.”

In India — Widespread Arrests and Harrassment of Civil Liberties

In the early hours this morning, three Dalit rights activists, a professor and a social activist from across three cities – Mumbai, Nagpur and Delhi were arrested — Surendra Gadling, who is the General Secretary of the Indian Association of People’s Lawyers, conducted a raid on the house of Professor Shoma Sen, Head of Department of English, Nagpur University, Sudhir Dhawale, Dalit activist, Republican Panthers and Editor Vidrohi from Mumbai, Rona Wilson, Public Relations Secretary, Committee for the Release of Political Prisoners and Mahesh Raut, anti-displacement activist from Bharat Jan Andolan and former Fellow at Prime Minister’s Rural Development (PMRD) for Gadchiroli District.
The arrests, purportedly made in response to what started out as First Information Report (FIR) filed  with police on 8th January with regard to violence that occurred at a Dalit commemorative event in the Indian state of Maharashtra, on 31st December, 2017.  The event had been organized by the Bhima-Koregaon Shaurya Din Prerna Abhiyan [the Dalit, Campaign for the Celebration of Bhima Koregaon Victory].  The FIR was converted to the much more serious  “conspiracy case” in March 2018 and now has had sections of the Unlawful Activities Prevention Act (UAPA) added to it.  All these are repressive measures that the Indian state has routinely used to suppress democratic and people’s movements.  The arrests today have thus been made under UAPA, which has several draconian provisions which ensure long detention and makes it difficult to obtain bail.

These arrests come in the wake of the mass demand by Dalits, several political parties, human rights organizations and activists for the arrest  of  the leaders of Sangh Parivar [Hindu ethno-nationalist] organizations, Sambhaji Bhide and Milind Ekbote, who were actually responsible for the violence on 1st January, 2018 at Bhima-Koregaon. However the government of Maharashtra, which is a Bharatiya Janata Party (BJP)] government, has been protecting the actual perpetrators of the violence  and has been attempting to create a false narrative that the violence at Bhima Koregaon was caused by the (Dalit) Elgar Parishad and that banned Maoist organizations are involved.

More importantly, Advocate Surendra Gadling has been defending people in political cases, and has been handling many important, crucial cases. Arrest of Surendra Gadling is clearly linked with case of Profesoor Saibaba[2]. Mr Gadling was constantly being intimidated by police, so as to make him give up doing these cases. Saibaba’s bail matter is listed for hearing this Friday.

The Dalit coalition  — Bhima-Koregaon Shaurya Din Prerna Abhiyan which includes around 260 mass organizations had organized the commemoration of the 200th anniversary of the Battle of Bhima-Koregaon in which Dalits had played a major role in vanquishing Peshwa rule.  The Abhiyan had organized a mass meeting on 31st December, 2017 at the historic Shaniwar wada in Pune, with several prominent speakers. The Elgar Parishad was organised with the stated objective of fighting the Nav-peshwahi (New Peshwas – Hindu ethnonationalists-. The program was hugely successful and attended by thousands from across the state. However on the following day, those commemorating the event at Bhima-Koregaon were attacked by a mob carrying saffron flags (symbol of Hindu-ethnonationalists) and instigated by Sambhaji Bhide and Milind Ekbote, two right wing activists who are closely connected with the ruling BJP and this attack was part of a pre-meditated plan.

it is also no coincidence that the arrests and repression are happening at a time when there is a judicial enquiry headed by Justice J. N. Patel (Retd) into the January violence, to ensure that submissions from the victims of the Hindutva and State violence are suppressed. It has also happening at the time of forthcoming elections in the State as well as in 2019. The BJP government needs to polarize Dalit and Bahujan [non-Dalit marginalized castes] votes. And also to create a terror narrative thereby protecting the real terror culprits Sambhaji Bhide and Milind Ekbote who will ensure votes for the BJP.

We strongly condemn this open show of State terror and complete bypassing of the Rule of Law by the BJP governments in the State and the Centre and demand the immediate release of Advocate Surendra Gadling, Professor Shoma Sen, Sudhir Dhawle, Rona Wilson and Mahesh Raut forthwith .

[1] Those arrested have been involved in struggles for civil liberties, in defence of political prisoners and for the end of caste oppression. The arrests come at a time of political manoeuvring by Hindu ethnonationalists seeking to establish their hegemony with a view to sweeping upcoming elections.  These arrests have come in the wake of marginalized and oppressed castes who mobilized for an event of historical importance at the start of 2018.  During the event violence broke out, instigated by Hindu ethno-nationalist leaders.  However the BJP government of the state of Maharashtra where all this is happening , have been protecting the perpetrators and mounting false cases against those who are working for civil liberties, equality and justice.  The government is using the power of the state to suppress popular, progressive movements and bolster their conservative, right-wing, ethno-nationalist agenda. [CERAS]

[2] Professor G..N. Saibaba, is a wheelchair-bound former English professor of Delhi University who was convicted in March 2017 for his Maoist links and for “waging war” against the country. 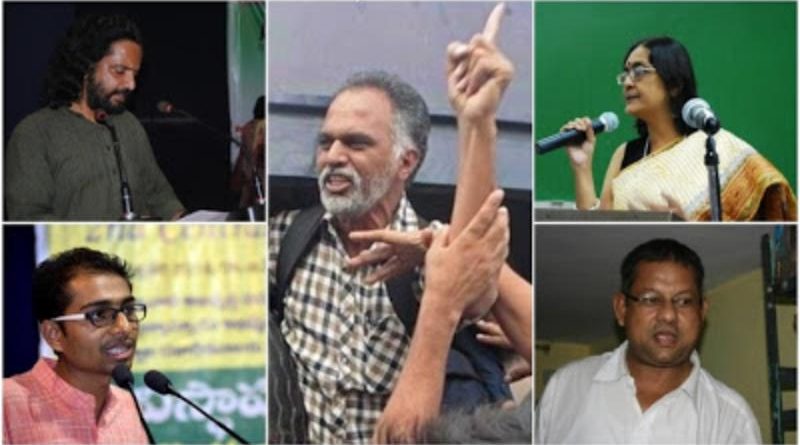