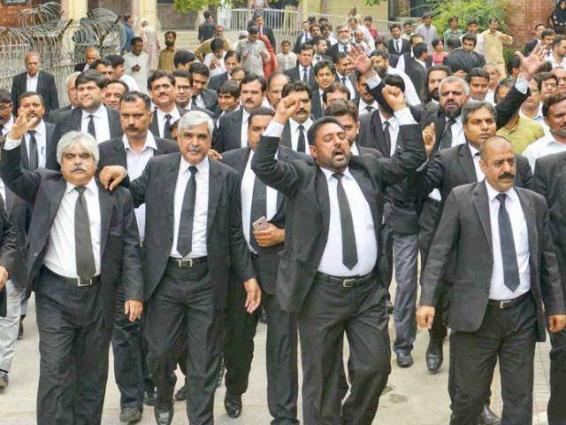 High Court Bar Association (HCBA) in occupied Kashmir staged a protest demonstration in Srinagar against the ongoing spree of killings by Indian forces in the territory.

High Court Bar Association (HCBA) in occupied Kashmir staged a protest demonstration in Srinagar against the ongoing spree of killings by Indian forces in the territory.

An HCBA spokesman in a statement in Srinagar said, “The lawyers abstained from courts in protestagainst killings at Fateh Kadal in Srinagar,” KMS reported.

He said, “Hundreds of lawyers participated in the protest. The lawyers demanded of the international community to come forward and play its role effectively in stopping the genocide of the people of Kashmir.” “The international community should put pressure on New Delhi to settle the Kashmir issue in accordance with the wishes and aspirations of the people of Kashmir,” the spokesman quoted the Bar members as having said.

“The United Nations Human Rights Council (UNHRC) should immediately send a fact finding team to Kashmir so that the sufferings and miseries of the people of Kashmir are brought to the notice of the world community and effective measures are taken to stop the blood bath in Kashmir,” he added. 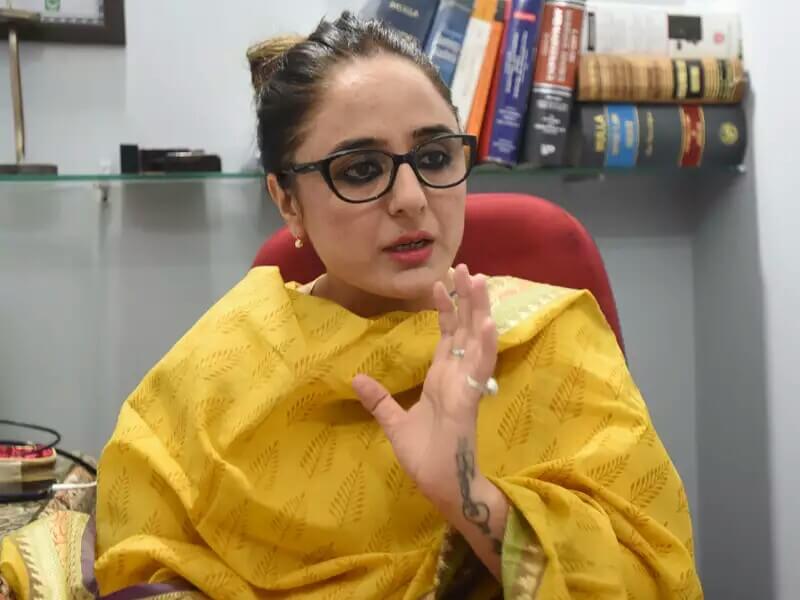 Deepika Singh Rajawat-the lawyer of Kathua rape and murder case, has been invited to participate in the 16th annual Mothers and Daughters Festival in Surrey, British Columbia Canada.
The festival which is also known as ‘Mela Mawan Dhiyan Da’ will begin on June 24th. She will also be honored in the event for fighting injustice and working for underprivileged class of the society.
Organizers have provided air ticket expenditure besides her accommodation and meals for three nights in Canada.
The lawyer is expected to share her views with some media organizations and also she will get an opportunity to speak at other public forums.
Invitation letter reads that “You will inspire countless other women to stand up and make a difference in the world.”
Deepika Singh Rajawat is counsel for the family of the eight-year-old girl, raped and murdered in Kathua district.

India/Kashmir: ‘How can we develop as a nation when we are raping infants?’ Advocate Deepika Singh Rajawat has not had it easy, ever since she took up the case of an eight-year old girl who was raped and murdered in Kathua in Jammu Kashmir: ostracised by the bar association and called names. But her resolve keeps her going. The young advocate came to Mumbai to receive the Woman of the Year award by the Indian Merchant Chambers Ladies Wing of Commerce and Industry. She enrolled as a lawyer in 2009 with the Jammu and Kashmir High Court and served as member of the Juvenile Welfare Board for Jammu district from 2010 to 2013. She tells The Hindu of her isolation and says she fears for her safety.

Did you always want to take up law?

Oh yes. I have always wanted to fight. Fight a fight through the law; fight inside court. And I am doing just that. I love my work.

How did life change after you took up the Kathua case?

Is it because you are a woman?

Yes, and more than that because I am a Hindu supporting a Muslim.

Do you fear for your safety?

Yes, because right now everyone is watching but if they get a chance they will definitely cause me damage. I am not scared because I am protected by my god and I believe that a supernatural power protects everyone.

Lawyer Deepika Singh Rajawat has won the most prestigious award of the year at the Indian Merchants Chamber of Commerce & Industry Ladies Wing – ‘Woman of the Year’.

The function will be held in Mumbai on June 11.

The Ladies Wing committee members have applauded Rajawat’s incredible achievements saying that she has shown grit, sincerity and dedication which is commendably inspirational.

Despite life threats from rightwing political parties, Rajawat fought against all odds in helping an eight-year-old girl of Kathua to get justice after she was raped and then murdered inside a temple by a gang of eight Hindus in Kathua during the first week of January this year.

Advocate Deepika Singh Rajawat, the Counsel representing the Kathua rape victim’s family, has been awarded the ‘Woman of the Year’ by the Indian Merchants Chamber of Commerce & Industry Ladies Wing. The ceremony will be held in Mumbai on 11 June.https://t.co/759rE9mZ0e pic.twitter.com/pFjV98MgO4

Lawyer Deepika Singh Rajawat, who fought for Kathua rape victim wins "Woman Of The Year Award" by the Indian Merchants Chamber of Commerce & Industry Ladies Wing.👍
She says, "the real award for her would be when the nation is abuse free."#JusticeForAsifa #Kathua #Asifa pic.twitter.com/v6OnWqShhv

Jammu and Kashmir Police have registered an FIR against lawyers and their agents for pasting posters in the Saddar Court Complex here on February 9 wherein a comparison were drawn between Muhammad Maqbool Bhat, Muhammad Afzal Guru and Bhagat Singh, Sukhdev and Chander Shekhar Azad.

According to police “the posters had message: Maqbool and Bhat are heroes of Kashmir, while Bhaghat, Sukhdev and Azad were the heroes of India.”

Taking strong note of the posters, police station Batamaloo registered a case against some lawyers and their agents under section 13 of Unlawful Activities Act. “Police station received information from credible sources that some lawyers and their agents had pasted posters of Bhat and Guru wherein they were termed as heroes of Kashmir; Singh, Sukhdev and Azad were declared heroes of India,” reads the FIR.

The FIR, a copy of which is with Greater Kashmir, further states that pasting the posters of Guru, Bhat and militants on the walls of court complex amounts to challenging the sovereignty of India and hence those involved need to be booked under section 13 of the UAA.

A police source said the issue has been taken very seriously by the top brass of police and investigations are afoot to identity the “lawyers involved in the act.” “Police team from Batamaloo is probing the matter seriously,” he said.

He said the posters were removed and seized by the police and it is being investigated wherefrom they were printed. “We are sure to find out who was behind the act,” he said.

Talking to Greater Kashmir, general secretary of Kashmir High Court Bar Association (KHCBA), advocate G N Shaheeen, said that registering an FIR is nothing new for the Bar. “We believe almost every citizen of Kashmir has been booked under this Act for raising voice against the forcible control of New Delhi,” he said. “First of all, on February 9 there was complete strike and no lawyer was present in the court. We don’t know who pasted these posters. Lodging FIR against lawyers is a non-issue.”

President Lawyers Club Kashmir, advocate Babar Qadri, said, “Open FIR is always like a sword that hangs on the heads of lawyers. My appeal to the HCBA president is not to remain silent on the police FIR and instead fight it out.”

The legal fraternity of Khyber Pakhtunkhwa province on Thursday boycotted courts to protest the brutal killing of family of a lawyer in a blast and murder of Asma Rani, the medical college student, after she refused a marriage proposal.

The lawyer community stayed away from court proceedings across the province. The lawyers observed the strike on the call of Khyber Pakhtunkhwa Bar Council.

Like other districts of the province, the lawyers in Peshawar also stayed away from courts. They demanded the provincial government to arrest the killers of the family of lawyer Gul Nawaz Khan Advocate killed in a landmine blast in Kurram Agency and Asma Rani. The lawyers also demand Shaheed Package for the family members of the lawyer in a terrorists attack.

Reportedly, the family of the lawyer was traveling from Muqbal area near the border to attend a funeral in Upper Kurram’s Basu area when their vehicle hit a landmine killing three women, two minor girls and three men on the spot. The car was destroyed in the blast.

Norway’s prestigious Rafto Prize for human rights will be conferred here to two prominent human rights activists, Parvez Imroz and Parveena Ahangar,from disputed Jammu and Kashmir, Sunday, November 5. Both the Kashmiri activists will be speaking at the ceremony titled, ‘Voices of Kashmir – Defending Civilians in a Heavily Militarized Zone.’

Parvez Imroz is co-founder of the Jammu Kashmir Coalition of Civil Society (JKCCS), which promotes human rights and non-violence. The JKCCS has documented the Indian authorities´ use of torture in Jammu and Kashmir and published several reports, being used as reference document worldwide. Parvez is a veteran lawyer and has survived an assassination attempt.