‘A few hours ago Nasrin was arrested at home and transferred to Evin,’ Tehran’s notorious prison where many political prisoners are held, her husband Reza Khandan wrote.

Sotoudeh, 55, one of the few outspoken advocates for human rights in Iran, recently represented several women arrested for protesting against the mandatory wearing of headscarves.

Tehran police said in February that 29 women had been detained for posing in public without their headscarves in the previous weeks.

Khandan’s Facebook message was defiant, saying: ‘I once told interrogators in the interrogating room: “Of all the things the authorities should do for their country, you only know one and that is arresting people.”‘

Sotoudeh won the European Parliament’s prestigious Sakharov rights award in 2012 for her work on high-profile rights and political cases, including juveniles facing the death penalty in the Islamic republic.

She spent three years in prison between 2010 and 2013 for ‘actions against national security’ and spreading ‘propaganda against the regime’ and remains banned from representing political cases or leaving Iran until 2022.

One Woman Stands Against the Iranian Government 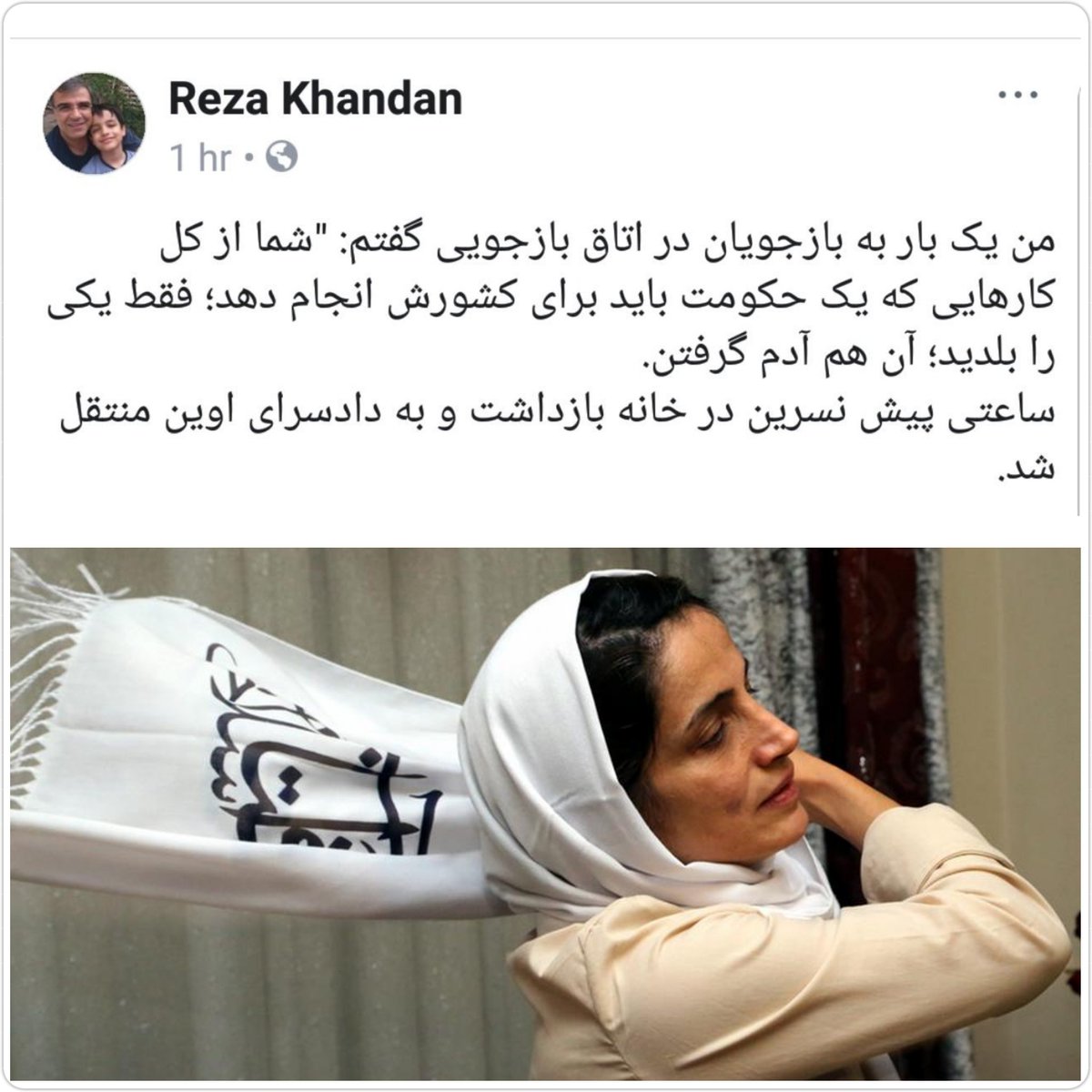 Her husband confirmed prominent #Lawyer/#HumanRightsDefender is arrested this morning. This is sad, considering she already had years…

Amnesty International: “We call on the Iranian authorities to release Nasrin Sotoudeh immediately and unconditionally. Any action short of this must be unreservedly condemned by the international community.” pic.twitter.com/ll1ktmWMv5 A court Wednesday sentenced the Maldives former president Maumoon Abdul Gayoom to 19 months in prison after he was found guilty of obstructing justice.

Gayoom, Chief Justice Abdulla Saeed and Justice Ali Hameed were charged for allegedly refusing to hand over their mobile phones for a police investigation. They denied the charge.

They were handed a prison term of one year, seven months and six days.

The trio were arrested on charges of plotting a coup, shortly after a state of emergency was declared on February 5 and following a Supreme Court order to release nine political prisoners.

They face numerous charges, which they have denied.

Condemnation of the trial, which went ahead despite a boycott from defence lawyers, was swift.

Amnesty International slammed the conviction as “politically motivated” and said the trial did not meet international standards, while MP Eva Abdulla urged people to use their vote in September’s presidential elections to “end injustice.”

“[We] condemn in the strongest terms the killing of the Honorable Presiding Judge Ricky Begino of the Metropolitan Circuit Trial Court (MCTC) of San Jose-Lagonoy, Camarines Sur,” Carpio said in a statement on Wednesday.

He added that, “the authorities concerned [should] take all the necessary steps with all deliberate speed to do justice for Judge Begino by fully investigating his killing.”

Begino, 49, was shot in the neck by Wilfredo Armea near his home in Barangay Sta. Maria, Presentacion town in Camarines Sur around 5 p.m. Tuesday.

Armea was arrested in a follow-up police operation on Wednesday morning.

Authorities continue to get rid of inconvenient lawyers. Another victim is a well-known lawyer Irada Javadova.

So, the Presidium of the Bar Association announced the termination of the authority of Irada Javadova and sent the appeal to the court on June 11. In the message spread in this connection it is said that the reason for this was a complaint of a certain citizen whose name is not disclosed.

“Complainant K.M. stated that Irada Javadova, without his consent and without concluding an agreement with him, wrote a complaint to the Interior Ministry about the illegal detention of the complainant in the Directorate for Combating Organized Crime and reported this to the press.

The complainant argues that the information is untrue and offends his honor and dignity. He asks the Bar to take action against Javadova,” the report said.

According to the same source, the complaint was examined at the Disciplinary Commission of the Presidium and the lawyer was taken an explanatory note. According to the Commission, Javadova was unable to confirm information about her client, transferred without his consent to the Ministry of Internal Affairs and the media.

Javadova herself has not yet made any statements on this matter.

It should be noted that in recent years, the authorities have been hunting for lawyers defending political activists and speaking in cases before the European Court of Human Rights. Thus, the officials dismissed such well-known and active lawyers as Namizad Safarov, Khalid Baghirov, Aslan Ismayilov, Alaif Hasanov, Elchin Namazov, Yalchin Imanov, Farhad Mehdiyev, Muzaffar Bakhshaliyev, Annaghi Hajibeyli, and Intigam Aliyev.

The authorities are trying to give a legal form to such actions, which cause sharp criticism of international organizations. Such a policy of official Baku is regarded as the suppression of rights and freedoms of citizens, denial of their ability to defend themselves in the courts and frank reprisals against those who do not agree with the policy of the authorities.

“Intent to threaten the unity, integrity, security, economic security, or sovereignty of India”

“Intent to strike terror in the people of India”

These are elements of some of the charges that have been slapped against a professor, a lawyer who fights for the release of political prisoners, an editor of a magazine, a human rights activist and an anti-displacement activist by the Pune police, under the Unlawful Activities (Prevention) Act 1967.

These five people – Shoma Sen, Surendra Gadling, Sudhir Dhawale, Rona Wilson and Mahesh Raut – have been arrested and remanded to police custody till 14 June, with the public prosecutor telling the court that they are involved with banned Maoist organisations.

But does any of this stand up to scrutiny? What exactly did these people do to get arrested? And does any of it actually make out the offences they’ve been charged with?

Devendra Fadnavis: We demand release of Advocate Surendra Gadling and other human rights activists – Sign the Petition! https://t.co/H3WSdr656J via @ChangeOrg_India

Update: Prosecutors issued a 15-day detention order for Labor lawyer and activist Haytham Mohamadeen on Wednesday. Arrested on May 17, he faces charges of helping a terrorist group in achieving its aims and inciting protests. Read earlier coverage here: https://t.co/9B9eRhaQE1 pic.twitter.com/K9UH4m1eKm