EU officials said efforts to sanction Poland over alleged rule-of-law violations would continue, after Warsaw’s attempt to defend itself at an extraordinary disciplinary hearing on Tuesday failed to persuade ministers and European Commission officials.

“Let me be very clear: The systemic threat for the rule-of-law persists,” Commission First Vice President Frans Timmermans said at a news conference following the hearing before the General Affairs Council in Luxembourg.

“So for us to be able to say that it no longer persists, we will need some more steps from the Polish side,” Timmermans said. “We have not had any indications of that today. But who knows — there might be indications in the near future. We remain open for that dialogue.”

The hearing against Poland was an extraordinary step, in an already extraordinary effort launched by the Commission in December to invoke disciplinary measures under Article 7 of the EU treaties, which theoretically could lead to the suspension of Poland’s voting rights in the European Council.

Turkey/IBAHRI: State of emergency and attacks on the legal profession in Turkey (VIDEO)

During HRC 38, IBAHRI co-organised a UN side event with the #LawSocietyand #BHRC on the state of emergency and the independence of the legal profession in #Turkey. The discussion focused on the systematic persecution of lawyers and threats to the rule of law since the attempted coup in 2016. Watch event: https://vimeo.com/277104106

IBAHRI also delivered an oral statement on behalf of five other organisations on widespread human rights violations against Turkish lawyers.

The IBAHRI welcomes the release of terminally-ill lawyer Mustafa Aydin and calls upon the Government of #Turkey to immediately end the arbitrary arrest, prosecution and detention of lawyers in accordance with the UN Basic Principles on the role of lawyers and international human rights law.

Jailed Chinese human rights lawyer Jiang Tianyong is being forced to take an “unidentified medicine” in prison, according to his U.S.-based wife.

Last week, Jiang’s father Jiang Lianghou visited his son in the Henan No. 2 Prison, where he is serving a two-year jail term  imprisonment after pleading guilty to “incitement to subvert state power” at what his family said was a show trial.

The elder Jiang, who is himself under continuous surveillance by China’s state security police, arrived at the prison on Friday, his second visit since his son was transferred there from a police-run detention center in April.

He reported back on “terrible” conditions at the jail, with Jiang only allowed to take his allotted exercise in the corridors, not in the open air, Jiang’s wife Jin Bianling told RFA.

Jiang is also being prevented from buying basic necessities using funds topped up by his family for that purpose, and from receiving clothing parcels from his relatives, she said.

But most worrying of all is that prison guards are forcing him to take an unidentified medication twice daily, and his memory has deteriorated considerably as a result, Jin said.

“He has to take medication twice a day,” she said. “When [his father] asked what the medication was, he said he didn’t know.”

“His father felt that there was a marked deterioration in his memory,” Jin said. 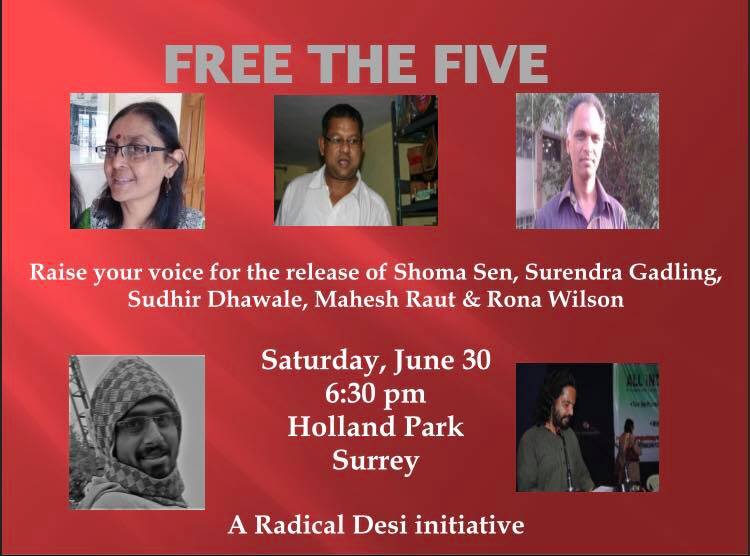 On June 6, many of us who knew one or few of the five people arrested, supposedly in connection with the ‘violence’ at Bhima Koregaon, woke up with hasty messages of unexpectedarrests. I received a message that Dalit activist Sudhir Dhawale was ‘picked up’ and had been taken to the Govandi police station in Mumbai. A huge crowd gathered outside the police station demanding to know the reasons for his arrest. But for Dhawale, who has been a face of some of the massive protests in Maharashtra in recent times and has similarly been implicatedin false cases earlier, arrests were not so unexpected.Amid protests from the crowd, the Govandi police took Dhawale to Pune from the backdoor.

As the day unfolded the shock meter rose manifold as unexpected and unwarranted arrests followed. While a reputed lawyer Advocate SurendraGadling was almost simultaneously being arrested from his Nagpur residence, one came to know that some Rona Jacob Wilson from Delhi and one Mahesh Raut working in Gadhchiroli had also been arrested. Raids were conducted at ex-Nagpur University Professor Shoma Sen’s house and she too was arrested.

All had been accused of one crime- inciting violence at BhimaKoregaon.

I watched in horror and shock as all these arrests were taking place, as both, an eye-witness of January 1 events at BhimaKoregaon memorial and as someone who broke the news and followed it through the months.

When Dalits were attacked at BhimaKoregaon, on an occasion meant to be a celebration- the bi-centenary of the battle of BhimaKoregaon – anger spilt out on streets of Maharashtra taking the form of a spontaneous, people’s protests.

USA: Immigration Lawyer Broke Her Foot When ICE Officer Pushed Her, She Says

An immigration lawyer said she fractured her foot after being pushed to the ground by an Immigration and Customs Enforcement officer as she followed her client, a 3-year-old boy, into an ICE building in Kansas City, Mo.

The lawyer, Andrea Martinez, said that she and a colleague were trying to accompany the child, Noah Bautista-Mayorga, into the ICE office around 3 a.m. Tuesday. Noah’s mother, Kenia Bautista-Mayorga, had been detained since May.

The family had entered the country illegally in February 2016 and was to be deported to Honduras on Tuesday morning.

Ms. Martinez said that she and the other lawyer were pushed forcefully by the ICE officer as he tried to block her from entering the building. The encounter was captured on a widely circulated video, which shows a brief scuffle between the two lawyers and an ICE officer, with Ms. Martinez tumbling to the ground after she approaches the door to the building.