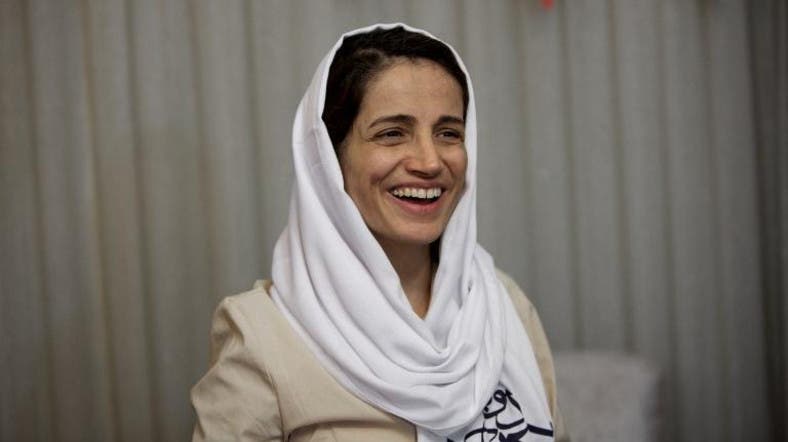 Iran’s semi-official ISNA news agency is citing the husband of a prominent human rights lawyer who says authorities have set bail at 6.5 billion-rial (around $152,500) for his imprisoned wife, who rejected it.
Nasrin Sotoudeh was arrested June 13 on charges of collusion and propaganda against the system. She had defended women protesting against having to wear the Islamic headscarf.

The Saturday report quotes Reza Khandan as saying Sotoudeh rejected the offer. Khandan said Sotoudeh considers the allegations against her baseless and believes the bail is inappropriate.
Khandan says Sotoudeh is housed in the general women’s ward in Evin prison.

https://www.niacouncil.org/niac-strongly-condemns-the-iranian-judiciarys-detention-of-nasrin-sotoudeh/
https://www.facebook.com/notes/mariacarmela-ribecco/iran-immediate-release-nasrin-sotoudeh/10155662222001801/ (URGENT ACTION – PLEASE SIGN! This letter will be sent by post and email to the President of the Islamic Republic of Iran on June 26, 2018. You can add your signature to the letter through this facebook note)

The first letter of Nasrin Sotoudeh from Evin prison: 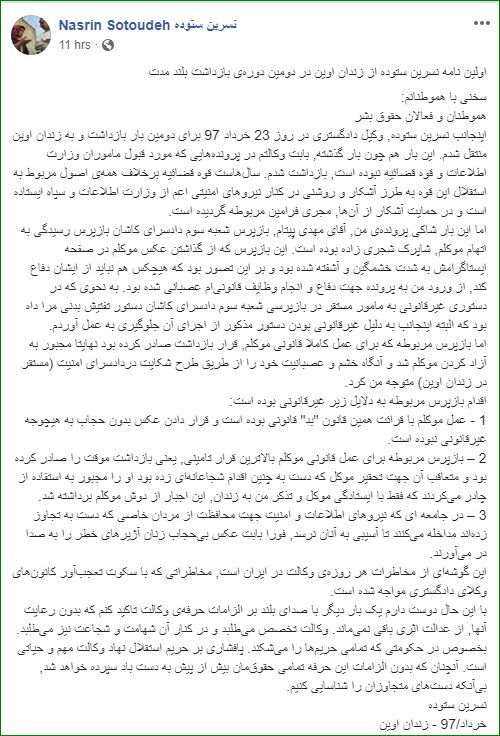 A memorial event to celebrate the lives of lawyer Willie Kimani and two others will be held today (Saturday) at Dandora Community Justice Centre.

This is going to be their second anniversary since the human rights lawyer was murdered alongside his client Josephat Mwenda and taxi driver Joseph Muiruri in June 2016.

Organised by International Justice Mission, the event will take place from 2 pm to 4 pm at Dandora phase 2 social Hall.

“Giving victims of extrajudicial killings a voice #Machoziyajana. Two years later we still remember the sacrifice they made in fighting against police impunity and holding the police to account,” IJM said via Twitter on Saturday.

Since their murder in 2016, 38 witnesses have testified in court and eight more are expected to testify when the case resumes on October 1, 2018.

Four police officers and a civilian are in custody after they were charged with their murder.

Kimani, Muiruri and Mwenda were abducted while leaving Mavoko Law courts on June 23, 2016.

Their bodies were found dumped in Ol Donyo Sabuk river on July 1, 2016.

Two years ago, our hearts broke as we learned of the kidnapping and murder of our beloved friends — staff member, Willie Kimani, IJM client, Josephat Mwenda, and taxi driver, Joseph Muiruri. This tragedy sparked a national and global outcry for justice and an end to police abuse of power in Kenya.

And today, Kenya is listening.

Since the trial, we’ve seen five accused persons in custody, and 38 witnesses have testified. As we remember these heroes, we are encouraged that there is hope for justice and truth to shine through the darkness. #JusticeInKenya #MachoziYaJana

The Philippines: Lawyer gunned down in Rizal

A lawyer and a security guard at a subdivision were killed in a gun attack in Cainta, Rizal on Thursday.

Security guard Jesus Mateo died on the way to the Cainta Municipal Hospital.

Initial investigation showed Galit and his wife were about to leave the subdivision in a Subaru Wagon (ABH 6819) when the suspects opened fire as their vehicle approached the gate.

Mateo tried to grab one of the suspects, but he was overpowered and shot several times.

The trial of a former governor of Doba southern Chad opened in N’Djamena on Friday but was postponed to Tuesday, 26 June, 2018 to allow for substantive negotiations.Former governor Adam Noucky Charfadine and his co-defendants therefore returned to the Amsinene prison where for the past few weeks they have been detained.

At the opening of the trial, the session focused on the jurisdictional competence or not of the high court of N’Djamena.

For lawyer Doumra Manasse, the case should be referred to a criminal court and not a mere flagrante delicto.

Lawyers of the former governor pleaded procedural violation given that the Doba court had declared itself incompetent.

Charfadine rejects all charges against him.

He is accused of rebellion, attempted murder and other charges.

He is being tried in connection to the shootings perpetrated by gendarmes on the vehicle of lawyer Doumra Manasse after he obtained the release of his clients acquitted by the court of Doba.

Chadian judges and lawyers accuse the then governor of masterminding the act committed by the gendarmes.

Azerbaijan/Kazakhstan/Ukraine: Side Event: Defenceless defenders: addressing the attacks on lawyers in Azerbaijan, Kazakhstan and Ukraine

This side event at the Human Rights Council takes place on Tuesday, 26 June, 14:00-15:00, room XXVII of the Palais des Nations.  It is organized by the ICJ and the International Bar Association’s Human Rights Institute (IBAHRI).

In recent years, lawyers have increasingly been targeted across the world including Eastern Europe and Central Asia. Attempts to impede the work of lawyers through arbitrary disbarments and other disciplinary procedures, criminal or administrative proceedings, physical attacks or intimidation have become an unfortunate new normality in many lawyers’ work.

Lawyers are too often identified with their clients’ cause or specifically targeted in violation of their right to freedom of expression. This side event will discuss challenges faced by lawyers in defending human rights in Azerbaijan, Kazakhstan and Ukraine.

#HRC38 | Side Event at UN Geneva on « Defenceless #defenders: addressing the attacks on #lawyers in #Azerbaijan, #Kazakhstan and #Ukraine » organised by the International Commission of Jurists and International Bar Association’s Human Rights Institute

The Observatory for the Protection of Human Rights Defenders, a partnership of FIDH and the World Organisation Against Torture (OMCT), requests your urgent intervention in the following situation in Iran.

Description of the situation:

The Observatory has been informed by the League for the Defence of Human Rights in Iran (LDDHI) about the arbitrary arrest, incommunicado detention and judicial harassment of Ms. Zeinab Taheri, a human rights lawyer.

According to the information received, on June 19, 2018, Ms. Zeinab Taheri was summoned to the Prosecutor’s Office for Culture and Media in Tehran and detained on charges of “disturbing the public opinion”, “spreading propaganda against the system” and “publishing lies”. Tehran Prosecutor Mr. Jafari Dolatabadi subsequently said during a press conference organised on the same day that Ms. Taheri had “incited the public opinion and mobilised the counterrevolution against the judiciary”, and that “the hostile media used her remarks to published reports against the judiciary”.

Later on the same day, Ms. Zeinab Taheri was transferred to the Qarchack women’s prison in Sharhr-e Rey, southern Tehran, where she has been detained incommunicado since. Ms. Taheri would allegedly have been subjected to ill-treatments during her detention and subsequently transferred to a hospital. She has also reportedly started a hunger strike to protest her detention.

Ms. Zeinab Taheri’s arrest came a day after one of her clients, Mr. Mohammad Salass, a Sufi dervish, was executed, for allegedly driving a bus that killed three members of the security forces near the house of a Sufi Order’s leader four months ago. Ms. Taheri took over the case in its final stage and applied for a retrial at the Supreme Court. However, the Supreme Court did not invite her to a hearing and did not seem to take notice of her application. In the final week leading to the execution of her client, Ms. Zeinab Taheri said that he had been coerced to confess under torture and had voiced her objections and criticism of the unfair proceedings against her client, including on Twitter, where she had vowed to “reveal for public opinion all possible” evidence of her client’s innocence. Ms. Taheri also wrote an open letter to Iran’s Supreme Leader Ayatollah Ali Khamenei to ask him to intervene in the case. The international community voiced its concerns about the judicial proceedings that led to the execution of Mr. Mohammad Salass[1].

A Turkish court ruled on June 21 to keep the local chair of Amnesty International in jail as his trial on terror charges continues, the group said, extending a year-long detention.

The court ruled that Taner Kılıç would be remanded in prison and his next hearing would be in November, Amnesty officials stated on Twitter.

Kılıç has been jailed since June 2017 on charges of supporting the movement of the U.S.-based Islamic cleric Fetullah Gülen that Ankara blames for a July 2016 failed coup attempt.

Prosecutors say Kılıç downloaded ByLock, a messaging app believed to be a communication means used by members of the Gülen movement, widely thought to be behind Turkey’s failed July 2016 coup attempt.

Kılıç has denied the charges, according to Amnesty.

“Today’s heart-breaking decision to keep our colleague in jail is yet another travesty of justice,” Amnesty’s secretary general, Salil Shetty, said in a statement. 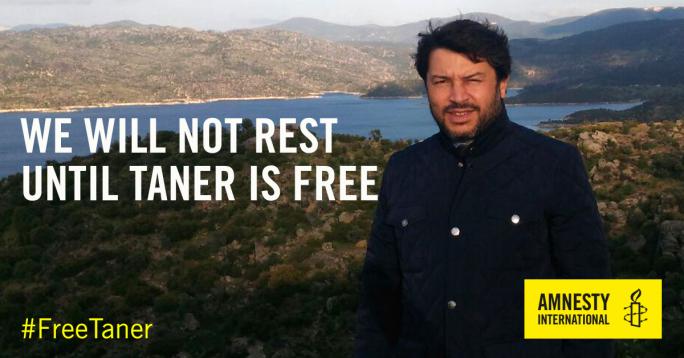 New president & his party control body that appoints judiciary. Until these changes judges & prosecutors had been a thorn in Erdoğan’s side. But 1/4 of them were dismissed in crackdown last year. Little wonder judiciary now gives Erdoğan standing ovations. https://t.co/4elHH1stNB