On a late summer night in 2017, a Chinese asylum seeker sat alone on the stairs of her home in California, battling insomnia and depression, thinking to herself that perhaps her troubles would end if she died in a car crash.

But Jin Bianling – the wife of human rights lawyer Jiang Tianyong, who has been jailed in Henan, mainland China, following the so-called 709 crackdown – has not given up on making speeches and giving testimony in the United States to seek help for her husband.

Jin’s plight and thoughts, along with other untold stories of how several “709 wives” escaped China with their young children to seek asylum in the US, are documented in a film produced by two independent Hong Kong journalists to mark the third anniversary of the crackdown in July 9, 2015.

More than 300 human rights lawyers, activists and their family members have been arrested, detained, prosecuted or imprisoned over the past three years.

Jiang was convicted and jailed for two years for “inciting subversion of state power” in 2017 – nine months after he was secretly arrested.

Titled 709 The Other Shore, the two-hour documentary, to be released in July, is the second one on the subject produced by Lo King-wah and Kong King-chu, who spent three years interviewing and filming more than 20 individuals caught in the crackdown.

A woman has been arrested in connection to a brutal attack that left a New York City lawyer’s face battered and bruised. Police say they’re now investigating the case as a possible hate crime.

Cops charged 37-year-old Amy Bell of Brooklyn on Wednesday with assault, aggravated harassment and harassment after they say she bashed a local civil rights lawyer in the face with a metal makeup box three weeks ago, NBC 4 New York reported. Bell allegedly mentioned the victim’s race during the incident.

“It’s the worst pain you ever felt in your face,” the lawyer, who asked to remain unnamed, told the station of the May 31 attack. “You just don’t know what you look like. My eye was bloody, totally shut.”

The victim, who works on behalf of children, families and immigrants, said she was walking back to work around noon that day when she first noticed her would-be attacker. She said she saw the suspect suddenly reach her arm back but figured she was just dancing. The woman was actually winding up to hit her, however.

” … The woman who hit me said, ‘White b—-,’ and was laughing that she hurt me,” she recalled. “I felt like I was going to pass out but I tried not to. And I went over to the first person I saw and said, ‘Do I have teeth in my mouth?’ ”

India: Video: Why Maoist letters found on arrested activists in the Bhima Koregaon case seem to be fake

Despite announcing it to the media, the Pune Police have not included the letters in their submissions to the Pune Sessions Court.

Citizens’ Solidarity with Voices of Democracy

We condemn the arrest of five human rights activists, professors and lawyers in connection with the Bhima-Koregaon clashes early this year. The alarming arrest of Advocate and General Secretary of Indian Association of Peoples’ Lawyers (IAPL) Surendra Gadling, Committee for the Release of Political Prisoners (CRPP) Public Relations Secretary Rona Wilson, Head of English Department Professor Shoma Sen of Nagpur University and member of Women against Sexual Violence and State Repression (WSS), cultural activist and founder of Republican Panthers Jaatiya Antachi Chalwal Sudhir Dhawale and anti-displacement activist and Prime Ministers Rural Development Fellow (PMRDF) Mahesh Raut is a clear manifestation of state terror to crush the voices of dissent in this country. The intemperate use of sections of the IPC and Unlawful Activities (Prevention) Act (UAPA) on all five reveals legal over-reach and exposes the desperation to foist extraordinary and excessive charges on all five to ensure they remain in the clutches of the Fadnavis-Maharashtra government. All the arrested have consistently worked for the assertion of oppressed and marginalised communities against majoritarian forces, spoken out against Brahmanical patriarchy, upheld peoples’ rights to land, life and dignity, and have strived for the release of political prisoners. Today, after standing for the assertion of dalits, adivasis, Muslims, women, workers, farmers, marginalised sexualities, and oppressed communities, upholding the principles of democracy, and, consequently, being a thorn in the side of a vengeful police force, they are under the custody of impunity. Meanwhile, the perpetrators of violence during the Bhima-Koregaon clashes enjoy the protection of the state, patronage of the RSS and walk free. Now, with concerted efforts to implicate the arrested, egregious narratives of plots of assassinations is being weaved to defame and keep them in jail. These retributive actions are intended to threaten anyone who speaks out for them and drive a wedge between all struggles for peoples’ rights. In the last few years, wherever people have asserted their rights, the political establishment has clamped down on them with brutal force – be it in Saharanpur or Una, Bhima-Koregaon or Thoothkudi. The assault on the democratic fabric of this country, through the abuse of the legal and judicial process, the stage-managing of media for public trials, and deliberate efforts to build a climate of fear is blatant and pervasive. Today, more so than ever, it is crucial to reiterate unity in the face of divisive majoritarian politics that uses structural hierarchies to violently suppress different sections of people and communities. We strongly condemn the arrests of these voices of democracy, demand the immediate and unconditional release of all five human rights activists, professors and lawyers and stand united in our opposition to the onslaught of Brahmanical Hindutva fascism.

[Please endorse this statement with your solidarity and your names will be added. It will be issued late evening on 24th of June, on the eve of Emergency Day. If possible, do share with others who may be willing to add their names in solidarity. If endorsements are added in the comments, it will be added to the list.

With sincere appreciation for the waves of support and solidarity.] 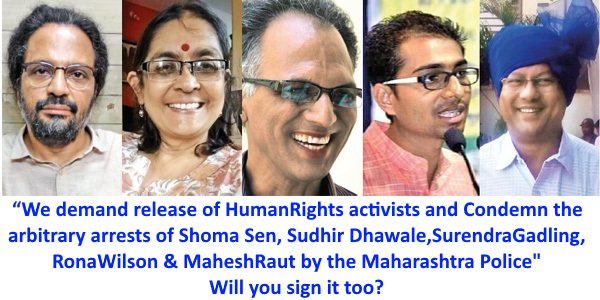 The police had applied to hold the activist for four days.

The Magistrate’s Court has dismissed the remand application against lawyer and human rights activist Siti Kasim over allegations that she had obstructed police officers from discharging their duties.

Ambiga Sreenevasan, who led a team of lawyers on behalf of Siti, said that registrar Sharifah Fazilah Zulkifli had dismissed the police’s application to hold Siti for four days.

“We assume the application was dismissed because there was no basis for the remand order.

“We sat down for over an hour for a full hearing and the registrar heard opinions from all sides,” she said, adding that Siti is being investigated under Section 186 of the Penal Code for obstructing a public servant from discharging his duty.

Nearly 20 of Siti’s supporters from the legal profession and human rights groups had turned up at the court for the remand hearing. They included Petaling Jaya MP Maria Chin Abdullah and women’s rights activist Ivy Josiah.

Maria said Siti’s arrest was unjustified and it was a clear case of police abuse.

“This is why we need an IPCMC (Independent Police Complaints and Misconduct Commission).”

Early this morning, police had arrested Siti at the Kajang police headquarters, hours after officers broke into her home following a report accusing her of forcibly detaining a woman.

Yes! @sitikasim is released. Magistrate dismissed application for remand. These are the lawyers representing Siti not that she can’t speak for herself😀 pic.twitter.com/XdJzcZFvKT

Malaysia: Lawyers, activists up in arms over Siti Kasim’s arrest

The human rights champion is alleged to have ‘abducted’ a 24-year-old woman who had apparently sought refuge with her.

Lawyers and activists have slammed the arrest of human rights champion Siti Kasim who is accused of kidnapping a 24-year-old woman.

This reportedly happened hours after officers broke into the lawyer’s home following a report accusing her of forcibly locking up a woman. Police had, according to a source, barged into her house around dinner time.

Lawyers for Liberty (LFL) executive director Eric Paulsen, in a series of tweets, said this was a clear abuse of police power.

Paulsen said that from the video, one could see a grown woman seeking help from Siti but the police have instead arrested both the lawyer and the woman.

“Kidnapping or confining a kidnapped person are very serious allegations. I hope the police have evidence to this effect other than arrest now and investigate later.

“Just because someone has lodged a police report does not mean the police must act without investigating the veracity of the report. This is just reckless. Don’t abuse your powers @PDRMsia. This is why we need the IPCMC (Independent Police Complaints and Misconduct Commission).

“Hope the @PDRMsia will have the sense to release @sitikasim and not be arrogant enough to seek her remand. The police have caused this fiasco in the first place and now dare to claim that she has obstructed the police?” he posted on Twitter.

The police crashed into my house, broke my door and took away #anisnurizzaty. I am outraged at this violation and fear for Anis safety. I am on the way to IPD Kajang with our team of lawyers and NGOs.