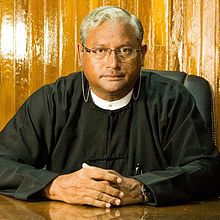 The Yangon Regional High Court on Monday revised the charges against several of the accused in last year’s assassination of U Ko Ni, a constitutional lawyer and legal adviser to the ruling National League for Democracy.

“This is not a result of outside speculation. I make this ruling based on [my own] judgment,” Yangon high court judge U Aung Naing said before announcing his decision.

The judge dropped charges relating to the importing/exporting and possession of firearms against accused conspirator Aung Win Zaw. He had been charged under Sections 19 (d) and 19 (f) of the 1878 Arms Act.

He will now face charges of conspiracy to commit murder under Section 302.(1) (b) of the Penal Code along with Kyi Lin, who fatally shot U Ko Ni, and taxi driver U Ne Win.

Report says no evidence exists Taner Kılıç ever had ByLock app on his phone, basis of terror charges against him 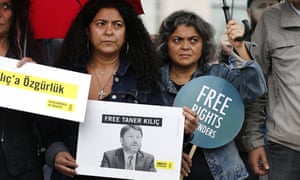 Turkey’s Amnesty chair, Taner Kılıç, could be freed this week following a year in detention after a police report conceded there was no evidence to back up the chief basis of the charges against him.

The case is being watched closely by the European commission as a bellwether of Turkey’s overall political direction in the midst of its closely fought presidential and parliamentary elections on Sunday.

The newly submitted 15-page police report presents no evidence to show that Kılıç ever had the encrypted mobile messaging app ByLock on his phone, which Turkish authorities claim is used by followers of the exiled cleric Fethullah Gülen. The prosecution alleged that the presence of the app was sufficient grounds to charge him with terrorist offences last June.

Amnesty had previously commissioned two expert reports to show ByLock had never been on his phone, but the reports did not persuade the courts to release him. Kılıç is facing a further hearing on 21 June.

The new police report – seen by Amnesty – details the forensic examinations carried out on Kılıç’s laptop, mobile phone, three USB sticks, a sim card and a memory card. The report concludes that “there is no evidence that falls within the parameters of the investigation” for each of the items under investigation.

The powerful leader of Romania’s governing party — convicted of voter fraud, suspected of stealing millions of dollars of European Union funds, and soon to face a verdict in a case involving abuse of power — had a message for the more than 100,000 citizens who gathered in one of the capital’s main squares recently: He is the victim.

The pro-government demonstrators in Bucharest on June 9 were protesting what they call a “parallel state” in Romania that they say perverts the rule of law with the aid of the president and the chief anti-corruption prosecutor.

If the anti-corruption forces could come for him, Liviu Dragnea, the leader of the governing Social Democratic Party, warned ominously, they could come for anyone.

“You must not be under the illusion that only high-ranking officials or public servants will be the victims of denunciations and fake evidence,” he told supporters. “Absolutely everyone today in Romania can be targeted by a denunciation which could lead to an arrest or conviction.”

The Philippines: Ax to fall on Sereno

THE final ax will fall on ousted Chief Justice Maria Lourdes Sereno on Tuesday, June 19, 2018, as Supreme Court justices are expected to dismiss with finality her appeal, thus making the tribunal’s ruling sacking her final and executory, sources said.

“Wherefore, respondent’s Ad Cautelam Motion for Reconsideration is Denied with Finality for lack of merit. No further pleadings shall be entertained. Let entry of judgment be made immediately,” the source quoted part of Tijam’s resolution.

The resolution also urged the Judicial and Bar Council to speed up the process of nomination for the next chief justice.

Once majority of the members of the high court adopts Tijam’s ponencia, Sereno will become the first chief justice to be removed via quo warranto. Former chief Justice Renato Corona was ousted from his post in December 2011 after the Senate impeachment court convicted him for betraying the public trust and committing culpable violation of the Constitution.

The SC source said Tijam’s draft ponencia maintained that Sereno must be sacked for lack of integrity and for her failure to submit Statements of Assets, Liabilities and Net Worth as required by law.