The President’s Office
Boduthakurufaanu Magu,
Male 20113
Republic of the Maldives

RE: Ongoing threats against human rights defenders in the Maldives

The Observatory for the Protection of Human Rights Defenders, a partnership of FIDH and the World Organisation Against Torture (OMCT), is writing to you to express its deepest concern over the ongoing threats and harassment against human rights defenders in the Maldives.

The Observatory has received information that at least 15 human rights defenders, including journalists, lawyers, and non-governmental organisation (NGO) workers, have been subjected to repeated acts of harassment and intimidation online since you took office in November 2018. In many cases, such acts have amounted to hate speech and death threats, which foster a dangerous environment for human rights defenders and impede them from doing their work.

Human rights defenders who have advocated for the respect of human rights, gender equality, and accountability for violations, as well as those who have expressed their support for religious tolerance, have been especially targeted. Online news outlet Vaguthu Online, Facebook page Siru Arts, and the now defunct Telegram channel Murtad Watch [‘Apostate Watch’] Mv have been the preferred platforms for religious extremists to attacks human rights defenders and label them as “un-Islamic”, “anti-religious” or “apostates.” Such platforms have also encouraged users to directly threaten human rights defenders with violence, often hiding behind anonymous Twitter or Facebook accounts.

Hameed was found guilty of obstruction of justice for refusing to hand over a mobile phone to the police. The High Court overturned Wednesday former Supreme Court justice Ali Hameed’s conviction over his refusal to hand over a mobile phone to the police.

Hameed was found guilty of obstruction of justice and sentenced to 19 months in prison along with former chief justice Abdulla Saeed and former president Maumoon Abdul Gayoom.

All three were arrested in February on separate charges of conspiring to topple the government. Former president Abdulla Yameen claimed the justices accepted bribes and instigated a coup with the Supreme Court’s February 1 order for the release of his jailed opponents. 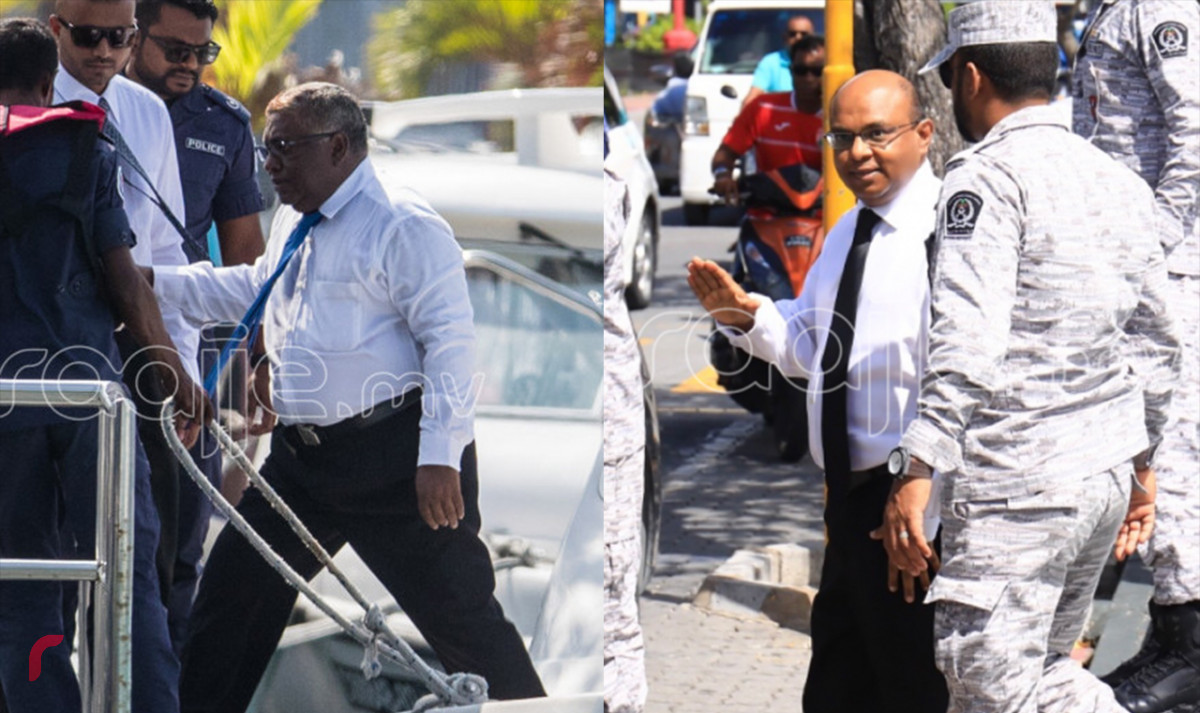 Nasheed said this while speaking at a rally in Meedhoo island of Addu City, Justice Saeed’s native island, and called on judicial authorities to facilitate their release.

The Criminal Court in May sentenced the apex court justices to nearly five months in prison, on charges of obstructing government administration and justice.

The justices were arrested in February, along with former president Maumoon Abdul Gayoom – whom Nasheed defeated through ballots in 2008 – during the political crisis that ensued after the Supreme Court ordered the release of political prisoners. 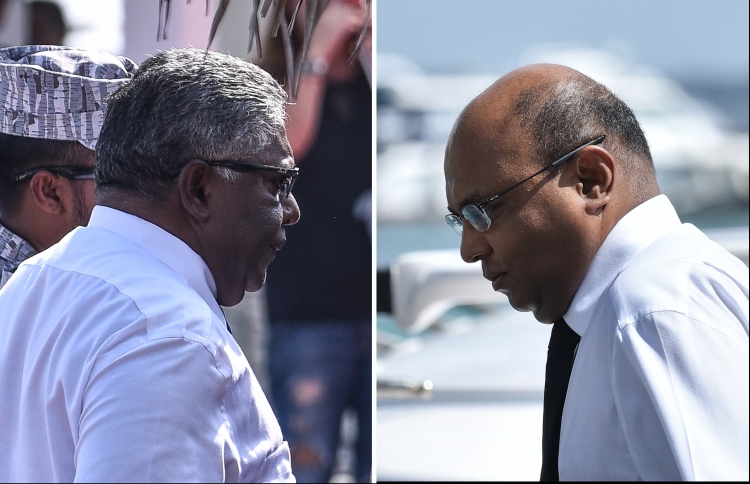 Saeed and Hameed were arrested and indicted of several charges over the top court’s landmark ruling of February 1 to release political prisoners. The state charged the two former justices and former Chief Judicial Administrator Hassan Saeed with accepting bribes, under accusations that Jumhooree Party founder Qasim Ibrahim’s Villa Group had paid for expensive properties in Malaysia that were acquired by people linked to the three.

The Criminal Court annulled their charges, stating that it could not proceed with the case based on the burden of proof.

The court also nullified the case against Qasim Ibrahim’s son Siyad Qasim, who was arrested and charged with giving bribes, in the case. The court annulled the charge, stating that the prosecution had not submitted evidence that proved Villa Group had paid for the properties in Malaysia.

While the court has dropped their bribery charges, Abdulla Saeed and Ali Hameed are serving jail sentences of more than three years over two convictions, while Hassan Saeed is imprisoned for four months and 24 days over one conviction.

The state has also levied terrorism charges against Abdulla Saeed and Ali Hameed. Their trials are currently ongoing.

Maldives: Ex-AG suspended from practicing law for a period of four months

DJA, run under the Supreme Court of the Maldives, made the announcement on Tuesday, stating that Suood’s suspension is effective from Tuesday for the span of four months. He was suspended after thorough investigation under the regulations set for law practitioners in the Maldives.

The ex-AG’s suspension comes following an inappropriate tweet he had posted regarding which read that the Supreme Court’s decision to extend a presidential term in 2013 is illegitimate.

It is also followed by an interview he gave to VNews in which he says that former President Dr. Mohamed Waheed’s term, who came into power after then President Mohamed Nasheed was ousted, had been extended under a Supreme Court ruling. He had gone on to say that this decision was illegitimate.

This is not the first time the ex-Attorney General has been suspended from practicing law.

Maldives: New government must break with repressive past

The change of government in the Maldives presents a huge opportunity to break with the repression and human rights violations of the past and chart a fresh course where human rights are at the heart of the policies and action of the new government, Amnesty International said today.

“This is a golden opportunity for the Maldives. The new government must break with the country’s repressive past and put the protection of human rights at the heart of its policies and action,” said Dinushika Dissanayake, Deputy South Asia Director at Amnesty International.

“The joint opposition made several pledges when it comes to the human rights situation in the Maldives. Now, it is time to begin to translate those words into action, including by releasing those people who were wrongly imprisoned, repealing repressive laws, and creating an environment conducive to full respect for human rights and where civil society can flourish.”

Jailed Adeeb’s defence lawyer was arrested on Thursday night under a court order decreeing that publicizing his client’s statements was a criminal offence.

The police raided his apartment on Friday morning and seized some documents, a pen drive, and a hard disk.

Upon being presented before the judge later in the evening, he had been remanded by six days after he confirmed publicizing his client’s statements. At the remand hearing Siraj had declared that he had done whatever needed to be done in his client’s defense as he is a law practitioner.

“Have any of you heard of a thing called lawyer-client privileges?” asked Siraj, going on to challenge the police service to present a law that states what he had done is illegal, which the police had failed to do. The officer investigating Siraj’s case had then claimed that the rights of President Yameen and General Shiyam had been compromised due to the statements.

Highlighting that President Abdulla Yameen is a candidate vying for Presidency in the Sunday election, the officer had stated that Siraj posed a threat to national security.

Police escorted Siraj to his apartment on Friday morning, and proceeded to search the place where his office is located.

As he was being escorted back after the raid, Siraj gestured a number two with his hand and called to vote for Joint Opposition’s candidate in Sunday’s poll. He further noted that ‘this is ending’.

According to his lawyer Ibrahim Shiyam, police seized ‘some documents, a pen drive and a hard disk’ in the raid. He added that they were seized for the investigation against Siraj, where he has been accused of issuing statements, citing Adeeb, with baseless allegations against incumbent President Abdulla Yameen.

Siraj published a number of statements from his most high-profile client last week, with various allegations against incumbent President Abdulla Yameen including sorcery.

While Siraj was arrested over these statements, his arrest order accuses him of spreading ‘fake news’ regarding state institutions and using ‘vulgar’ language in said statements. 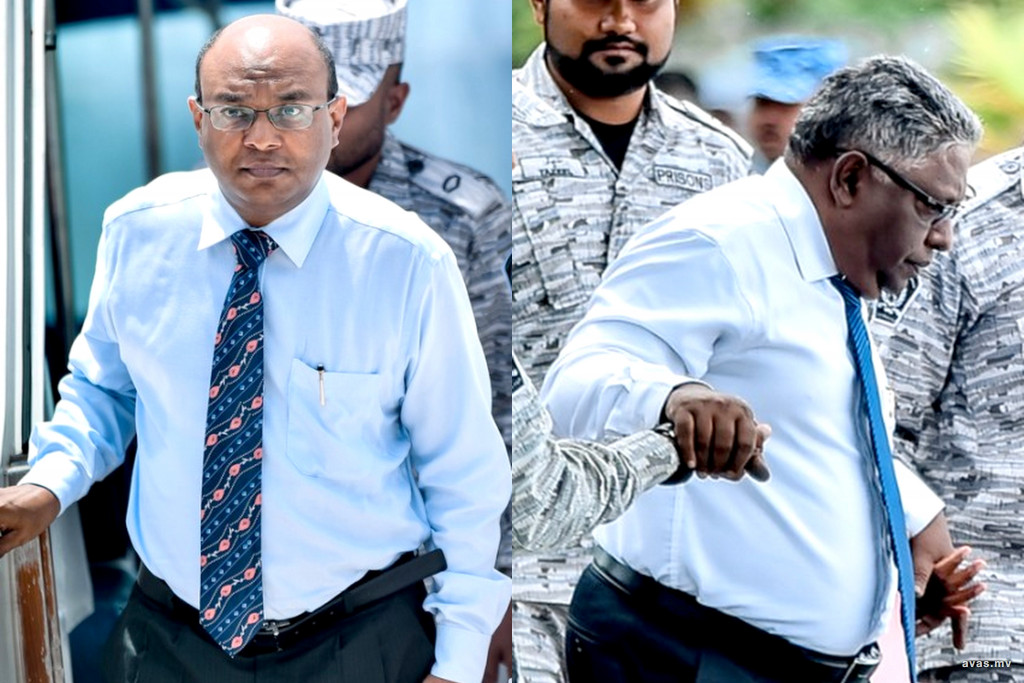 The island nation has been embroiled in fresh political turmoil after the Supreme Court on February 1 ordered the immediate release of jailed political leaders including self-exiled former president Mohamed Nasheed.

President Abdulla Yameen Abdul Gayoom on February 5 had declared state of emergency after his last ditch attempt to convince the top court to revoke the order failed, purged the Supreme Court by arresting two judges and the remaining political leaders and ultimately had the order revoked.

Less than a day after the arrest of the two judges, the remaining three judges rescinded its ruling to release the political leaders referring to the concerns raised by president Yameen in the letters he had sent to the chief justice hours before state of emergency was declared.

Chief justice Abdulla Saeed along with top court judge Ali Hameed facing four separate charges which includes terrorism after being accused in the plot to overthrow the government were convicted of abuse of power to influence lower court judges and sentenced to one year, six months and one day in prison in June.