Four people were detained at an Ankara pastry shop while they were allegedly making plans to escape Turkey crackdown, on Wednesday.

Ankara police raided a bakery in Etimesgut district where two lawyers, a doctor and a university student were met before they hit the road for illegal exit from Turkey, according to state-run Anadolu news agency.

Police reportedly seized during the raid TL 22,000 [$6,500], passport size photos and IDs that do not belong to the detainees.

One of the lawyers had already had an outstanding arrest warrant issued for him/her over ties to the Gulen movement, which the government accuses of mastermindingt he July 15, 2016 coup attempt.

More than 120,000 people have been detained and some 50,000 including academics, judges, doctors, teachers, lawyers, students, policemen and many from different backgrounds have been put in pre-trial detention since July 15, 2016.

Not satisfied with dismissals, Turkish government cancelled passports of thousands of people while putting travel ban on many others.

Cameroon: TRIALS OF ACTIVISTS ARRESTED IN THE CONTEXT OF THE “ANGLOPHONE CRISIS” SINCE NOVEMBER 2016

Authorities in Tajikistan have piled the pressure on jailed lawyer Buzurgmehr Yorov by filing criminal charges against his sister and brother.

Yorov’s sister, Hosiyat, told EurasiaNet.org that she and another brother, Jamshed, learned on May 29 that they face accusations of inciting the violent overthrow of the government. Jamshed Yorov and a former lawyer for the family, Muzamma Kodirova, have been hit with separate charges of incitement to ethnic and religious hatred. All three are currently outside Tajikistan.

Buzurgmehr Yorov was arrested in September 2015 on charges of fraud and forging documents only days after he agreed to represent leading members of the now-banned Islamic Renaissance Party of Tajikistan, who were accused of attempting to topple the government. Rights groups called the case “politically motivated.” In total, Yorov has been sentenced to serve 25 years in jail.

The Yorov siblings are under pressure to return to their homes country from Germany, where they are currently pursuing efforts to lodge their brother’s case in international rights tribunals.

“Jamshed’s wife is being kept in Tajikistan as a hostage. They will not let her leave the country. They have threatened her by saying that if she leaves, they will file charges against other members of her family,” Hosiyat Yorova told EurasiaNet.org.

The legal fraternity in Khyber Pakhtunkhwa on Tuesday observed complete strike across the province to protest the killing of their colleague in Mardan district.

The Khyber Pakhtunkhwa Bar Council had given the call to protest the killing of senior lawyer Zaib Alam Khan in Mardan. On the other hand, there are reports that he was gunned down by his close relatives over a land dispute in Mardan.

Like other districts, lawyers in the provincial metropolis also observed complete boycott of courts. The lawyers leaders including Muhammad Sareer Khan, vice-chairman KP Bar Council, and its members Muhammad Ijaz Sabi, Noor Alam Khan, PHC Bar Association President Arbab Muhammad Usman, general secretary Rahmanullah Khan, Peshawar Bar Association president Fazal Wahid condemned the lawyer’s killing and demanded immediate arrest of the culprits. They asked the provincial government to provide security to the lawyer community which was under attack as many lawyers have been killed in the province. Vietnam’s prime minister Nguyen Xuan Phuc is visiting Washington on May 31 and meeting with President Trump, the latest of a growing list of autocrats Trump has hosted, visited, or praised on the telephone.

After Trump’s glowing endorsement of Philippines’ Rodrigo Duterte, his praise of Egypt’s strongman Abdel Fattah el-Sisi, his warm words for Turkey’s President Recep Tayyip Erdogan, and cozy visit with the Saudi royal family, one might be tempted to think that the idea of the US promoting human rights in Vietnam is absurd. For decades, even as the United States has steadily strengthened its ties, it has pressured Hanoi on political prisoners, religious liberty, and labor rights. But how can those efforts possibly continue in a Trump administration? Even if the administration cared about human rights, it now lacks credibility.

There are plenty of cases for Vietnam to address. There is the detention of dissident blogger Tran Huynh Duy Thuc, who is serving a 16-year prison sentence for his internet writings and attempts to form a group to promote democracy. The cases of religious activists Ngo Hao and Nguyen Cong Chinh, who are serving 15- and 11-year prison sentences respectively for their advocacy on religious freedom. There is lawyer Nguyen Van Dai, bloggers Nguyen Huu Vinh, Nguyen Dinh Ngoc, Nguyen Ngoc Nhu Quynh (“Mother Mushroom”) and Ho Van Hai, and the longtime human rights advocates Tran Anh Kim and Le Thanh Tung.

When US leaders raise names publicly, it can often lead to those prisoners being treated better in prison—and released sooner. That is reason enough to mention them by name.

Egyptian President Abdul Fattah Al Sissi on Monday enacted a law imposing strict new regulations on aid groups, stoking fears that his government intends to accelerate its crackdown on human rights activists before a presidential election scheduled for next year.

The new law, which some aid groups predict will force them to shut down, was approved by Egypt’s Parliament in November last year, but Al Sissi hesitated to sign it after trenchant criticism from Western officials, most notably Republican Senators John McCain of Arizona and Lindsey Graham of South Carolina, who threatened to restrict US aid to Egypt if the legislation was approved.

But recently, Al Sissi has appeared emboldened by a burgeoning friendship with President Donald Trump, who has hailed the Egyptian strongman as a “fantastic guy” and indicated that he did not intend to allow human rights issues to sour their relationship.

Having welcomed Al Sissi to Washington last month, Trump met with him again during his visit last week to Saudi Arabia, where the two leaders were photographed touching a glowing orb alongside King Salman Bin Abdul Aziz of Saudi Arabia. On his return to Egypt, Al Sissi’s government pushed through new press restrictions and prosecuted a rival political leader in the courts, further squeezing political rights and free speech.

On May 23, police arrested Khalid Ali, a prominent human rights lawyer who led opposition to Al Sissi’s decision early last year to hand over possession of two Red Sea islands to Saudi Arabia. That agreement angered the Egyptian public, and it is one of the few issues where Al Sissi is considered politically vulnerable.

Some saw the arrest as part of an effort by Al Sissi to clear the field of rivals before next year’s presidential election. If Ali, one of those rivals, is convicted on charges of “violating public morals”, he faces a potential two-year prison sentence and will be disqualified from running for office.

USA: DOJ is trying to bully lawyers who help immigrants. First, they’ll have to overcome the First Amendment. 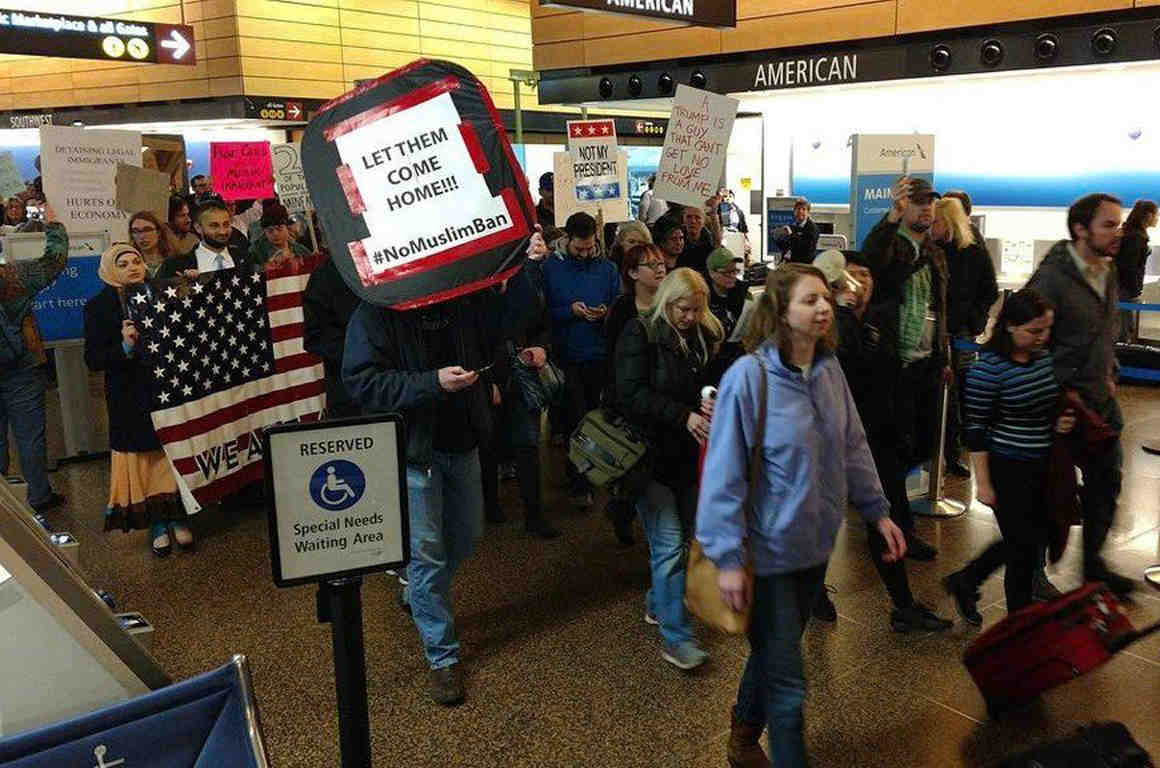 The lawyers at Northwest Immigrant Rights Project recently found themselves in the crosshairs of the Department of Justice for doing something they’ve done for more than 30 years: helping immigrants who can’t afford a lawyer.

In a letter to NWIRP, the DOJ attempted to require the group to either agree to provide full representation in deportation proceedings to an immigrant seeking help or forgo helping that person entirely. Groups like NWIRP do not have the resources to fully represent every immigrant who needs help, and in immigration proceedings the government does not provide lawyers to people who cannot afford them. The DOJ’s demand would severely limit the number of immigrants who receive legal assistance in Washington.

It also happens to be unconstitutional.

NWIRP challenged the DOJ’s in court, and the ACLU of Washington filed an amicus brief in support of the challenge. U.S. District Court Judge Richard Jones granted NWIRP’s request for a temporary restraining order, finding that the government’s demand violated the nonprofit’s free-speech right to share information with others.

Since the 1960s, the U.S. Supreme Court has repeatedly and consistently recognized that the right of people to receive information from lawyers, and the right of lawyers to give information to people in need of it is free speech protected by the First Amendment.