The Philippines: Caloocan prosecutor gunned down

A veteran member of the Caloocan City Prosecutor’s Office was gunned down by a lone assassin who was backed up by at least two cohorts as the victim was approaching his car in front of his house yesterday morning in Caloocan.
Initial reports said Assistant City Prosecutor Diosdado Azarcon, 57, died on the spot from gunshot wounds in the head and body.
His assailant described by a witness as about 5’5 in height, medium-built, short black hair and wearing gray T-shirt escaped of board a waiting motorcycle driven by his cohort toward an unknown direction.
In a report to Northern Police District (NPD) director Chief Supt. Roberto Fajardo, city police chief Senior Supt. Chito Bersaluna showed that the victim was about to ride on his Toyota Avanza parked in front of his house in Barangay 63, West Grace Park around 7:35 a.m. when the killer shot him at close range in the head and body, killing him instantly.
Elements of NPD Crime Laboratory led by Chief Insp. Avelino Andaya recovered three empty shells and one deformed bullet for a .45 caliber pistol from the crime scene.
Investigators are still facing a blank wall as to the motive behind the incident since the immediate family members of the victim were still in shock over the killing.

350 Italian lawyers have reopened the Hotel Imperial of Sousse, the resort that on June 26th 2015 was the theater of a cowardly terrorist attack in which 39 people were savagely killed while they were on the beach. Together with their Tunisian colleagues and representatives of other Bar associations of the Mediterranean area with a collective dive in the sea they symbolically wanted to say no to terrorism, forming on the beach a human chain.
“Italian lawyers and Tunisian lawyers sustain democracy and peace” was the theme of the conference.
The fight against terrorism, respect of fundamental rights and women’s role in the Mediterranean were the key themes of two round tables.
An opening ceremony was held during which the Tunisian minister of Justice, Ghazi Jeribi, and the Italian vice minister of Tourism, Dorina Bianchi, attended.
“The Holy Father Francis extends his personal and cordial regards expressing appreciation for the initiative, directs to reflect, to encourage and to sustain every effort for a more lasting, untiring search of the peace”, which was read in a telegram sent by the Vatican secretary of State Cardinale Pietro Parolin.
The initiative received the medal of representation from the President of the Italian Republic.
“The sea dive is also a symbolic gesture to help resume tourism in Tunisia” the lawyer Francesco Caia said, coordinator of the human rights and international relationships committee of the Consiglio Nazionale Forense, which organized  the event  from the Italian side.
http://ildubbio.news/ildubbio/2017/05/20/350-avvocati-italiani-sousse-tuffo-collettivo-spiaggia-restituita-futuro/ (ITALIANO)
https://www.lamezialive.it/la-calabria-partecipa-al-progetto-imperial-un-tuffo-sousse-terrorismo/ (ITALIANO)
http://www.cn24tv.it/news/154142/tuffo-di-solidarieta-contro-il-terrorismo.html (ITALIANO)

Turkish police on Sunday raided a houses belonging to Semih Özakça and Nuriye Gülmen, educators who went on a hunger strike after they were fired by government decree in the aftermath of a July 15 coup attempt in Turkey.

“The political police are breaking our door” Nuriye Gulmen tweeted.

Gülmen was fired from Konya Selçuk University for her alleged ties to the Gülen movement. Meanwhile, Özakça was a teacher at a primary school in Turkey’s eastern province of Mardin before he was purged over ties to a terrorist organization.

The two protested for months in the same area before they started their hunger strike. Both have been detained several times due to their protests.

Thousands of academics and teachers have been removed from their jobs since the July 15 coup attempt as part of a post-coup purge launched by the government under the pretext of an anti-coup fight.

In Ankara, Nuriye Gülmen and Semih Özakça have been on an ongoing hunger strike for more than 70 days against the dismissals and the state of emergency, and their health is becoming increasingly worse.  Last night the police raided their houses and now they are under arrest. Also with them are our collegues, lawyers Ebru Timtik and Ayşegül Çağatay, who have also been arrested.  Ayşegül and Ebru are members of ÇHD and this attack seems on purpose.
Nuriye and Semih have already stated that they will refuse even water and sugar if their detention continues. This means clearly that they will die or it will cause irreperable harm, so the situation is urgent.  We are asking all our collegues and associations to issue urgent statements or hold protests (like sending faxes etc…).  Updates will be provided.

BOHOL’s tourism industry heaved a figurative sigh of relief when the last of the 11 Abu Sayyaf members who landed in Inabanga last April was killed last May 15. The presence of the Abu Sayyaf in Bohol, the subsequent military operations, and the travel warnings issued by a number of foreign embassies had resulted in hotel and tour cancellations.

Crime, especially violent crime, in general is bad for the tourism business.

Recently, former volunteers of Voluntary Service Overseas (VSO) and Netherland Development Organization (SNV), their friends and relatives, wrote an impassioned letter to the Bohol provincial board. The letter is an expression of solidarity with Stuart Green, a British former VSO volunteer, whose wife, lawyer Mia Mascariñas-Green, was brutally murdered in Tagbilaran City last February 15 (see my Manila Times column of March 27, “Murder in paradise,” for details about the murder).

The 73 individuals who signed the letter said they felt “compelled to ask tourists to think twice about visiting Bohol until this crime has been solved and to inform the Bohol resort they were planning to visit as to the reason.” They described the murder as a barbaric act and were “appalled to know that the alleged perpetrators were arrested in Bohol only months ago for possession of both “shabu” (…) and the illegal possession of firearms only to be immediately released (…) upon the recommendation of the local prosecutor.” They were referring to the raid conducted on the resort then controlled by the murder suspects, a raid that yielded high-powered firearms, silencers, ammunition and shabu.

Yes, the suspects are still at large. 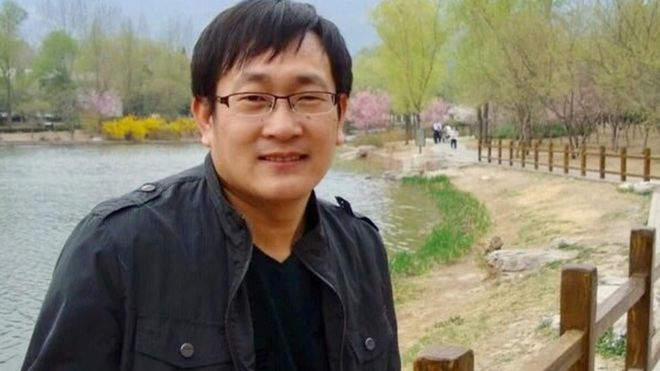 In August 2015 Wang Quanzhang was detained by the Chinese authorities.

In that he was not alone. The nationwide series of raids that summer saw more than 200 lawyers, legal assistants and human rights activists brought in for questioning.

But almost two years on, Mr Wang is the only lawyer from whom nothing has been heard at all.

“I don’t know whether he’s alive or dead,” his wife Li Wenzu told me. “I have had no information at all. He has simply disappeared from the face of the earth. It is so scary, so brutal.”

China’s “709” crackdown as it’s now known – a reference to 9 July, the date it began – is widely seen as a sign of a growing intolerance of dissent under President Xi Jinping.

Of the large number of people initially detained, around two dozen have been pursued as formal investigations. Over the past year or so those cases have gradually been reaching some kind of a conclusion.

Some of the accused have been given long jail terms, of up to seven and a half years, for the crime of subversion.

Others have been given suspended prison sentences or released on bail, but still remain under constant surveillance.

But of the lawyers arrested in that initial 2015 sweep, Mr Wang is unique. Apart from one brief written notification of his arrest, the family say he has disappeared into a black hole.