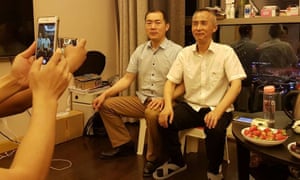 The last time Terry Halliday saw Li Heping, just a few days before he was snatched by police in the summer of 2015, he remembers sitting down to lunch with a stimulating, thoughtful and physically fit man.

“Slim, yes, but not emaciated. A man clearly in his 40s … A man who was fully present,” the American Bar Foundation scholar recalled.

Just days later Li, a crusading Chinese human rights lawyer, was spirited into secret custody at the start of an unprecedented government crackdown on his trade that has drawn widespread international condemnation.

On Tuesday afternoon, after almost two years languishing behind bars, Li finally emerged, having been secretly tried and handed a suspended sentence for “subversion of state power” at the end of last month.

Photographs and a brief video clip posted online showed the Christian attorney, now 46, being reunited with his wife and daughter, Wang Qiaoling and Li Jiamei, at their family home in Beijing.

“I have to say I didn’t recognise him in the [photo],” said Halliday, the author of a book on China’s human rights lawyers, who like many was disturbed at the toll incarceration appeared to have inflicted on his friend.

“[He looked] very thin. He’s aged about 20 years. His hair has gone grey. He’s gone through a torturous time, I would say,” Halliday added. “I would defy anybody … to imagine that so much transformation could have occurred over two years.”

The Supreme Board of Judges and Prosecutors (HSYK) has decided to reshuffle 1,035 judges and prosecutors on Tuesday following Friday’s mass purge in the judiciary. According to a written statement issued on the website of the HSYK, 10 administrative officers have also been reshuffled.

A total of 4,238 judges and prosecutors have been dismissed and thousands have been replaced since failed coup attempt on July 15, 2016, according to the HSYK.

On Friday, the HSYK dismissed 107  judges and prosecutors over their alleged links to Gülen movement.

The government has been criticized for using the coup attempt as an excuse to purge judges and prosecutors and replace them with names close to the ruling Justice and Development Party (AKP) and Turkey’s autocratic President Recep Tayyip Erdoğan.

The Law Society of England and the Wales has written to President Paul Biya, requesting the immediate release of Justice Ayah Paul Abine, Barrister Felix Agbor Kongho, Dir Fontem Neba, Mancho BBC and all supposed activists arrested in relation to the ongoing crisis in the North West and South West region.

In the letter dated April 25, a copy of which Journal du Cameroun stumbled upon, the international lawyers’ protection organisation, also requests that government should ensure that any further proceedings and only if required and in compliance with international norms, non-custodial measures are applied.

The organisation equally demands that government should ensure that the persons who have been arrested and detained are tried by an ordinary court, not by a military tribunal, and that they can appeal any judgment rendered through an independent, impartial, judicial proceeding that is open to the public and in which all rules regarding due process are respected.

The Law Society is a professional body representing more than 166,000 lawyers in England and Wales. Its aims include upholding the independence of the legal profession, the rule of law and human rights around the world. The subject of its letter to President Biya is tittled, ‘Prolonged detention – Lawyer Nkongho Felix Agbor and others”.