New information
CMR 001 / 0716 / OBS 056.3
Judicial harassment /
Release
Cameroon
The Observatory for the Protection of Human Rights Defenders, a partnership of FIDH and the World Organisation Against Torture (OMCT), has received new information and requests your urgent intervention in the following situation in Cameroon.
New information:
The Observatory has been informed by reliable sources about the release on bail and ongoing judicial harassment of Messrs. Abue Philip Kpwe, Cyprian Azong, Bernard Fuh and Divine Biame, members of the Esu Youths Development Association (EYDA)[1]. The four are part of a group of community leaders opposing land-grabbing undertaken on the land of the Esu community (North-West Cameroon) by Mr. Baba Ahmadou Danpullo[2], a billionaire businessman, cattle rancher, tea plantation owner and a member of the Central Committee of the ruling Cameroon People’s Democratic Movement (CPDM) party.
According to the information received, on May 4, 2017, Messrs. Abue Philip Kpwe, Cyprian Azong, Bernard Fuh and Divine Biame were released on bail from Bamenda Central Prison, following a bail order issued by the Appeal Court of the North-West Region on December 20, 2016, which had not been implemented until now (see background information).
The Observatory would like to recall that Messrs. Abue Philip Kpwe, Cyprian Azong, Bernard Fuh and Divine Biame were detained since May 2016 as part of an ongoing trial targetingfive other Esu leaders, namely Messrs. Redemption Godlove, Ephraim Kagha Mbong, Emmanuel Wung, Ivo Meh and Williams Meh, on trumped charges of “depredation by band” (Section 236.1 of the Penal Code). If convicted, the nine face 10 to 20 years in prison. HRH Fon Kum Achuo II, chief of the village[3], is also facing charges related to two complaints filed on behalf of Mr. Baba Ahmadou Danpullo. The case is still pending without a scheduled date for the next hearing.
Furthermore, Me Robert Fon, lawyer of the nine Esu community leaders, and Mr. Chris Mbunwe, a journalist of the Post Newspaper in Bamenda, who are accused of defamation through a complaint filed by Mr. Baba Ahmadou Danpullo on February 24, 2016 regarding an interview[4], also had their hearings postponed on several occasions, including on November 9, 2016.
On March 16, 2017, Me Robert Fon was arrested and detained until March 27, 2017. Initially arrested on charges of “acts of terrorism” and “insurrection”, he was released due to lack of evidence. Me Robert Fon suffers from a heart condition, which was severely aggravated by his arbitrary detention.
…

On the afternoon of Sept. 20, J. Randall Barrs was standing beside his Mercedes parked outside his Bedford Road office when he was shot twice by a man wearing a construction vest and a blonde wig.

Seconds later, the man in the disguise was shot by an undercover Halton police officer while he attempted to flee.

Both Barrs and the suspect recovered from their injuries.

On Wednesday, the province’s Special Investigations Unit cleared the Halton officer involved in the incident, saying he was “acting in the course of his duties” when he fired at the suspect.

In its decision, the SIU revealed that 51-year-old Grayson Delong was being monitored by a team of Halton police officers since 9 a.m. that day, after he made a court appearance in Brampton. 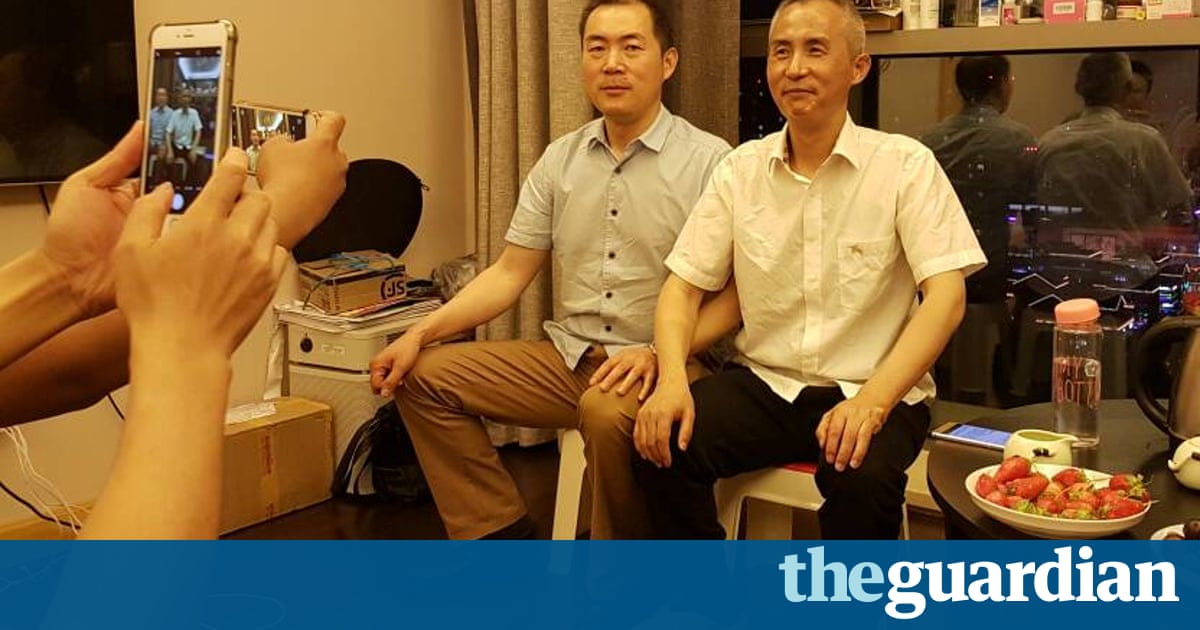 Chinese human rights lawyer Li Heping, who was released from detention and rejoined his family earlier this week, is still able to smile and remains optimistic despite enduring about 60 days in solitary confinement and years of ill-treatment in custody, according to his friends.

Li, 46, was sent home to rejoin his wife and daughter in Beijing on Tuesday after he was convicted of subversion of state power last month.

Li was handed down a three-year suspended prison sentence at a closed-door court hearing, but had already spent years in custody – more than 600 days in total –after he was detained in the sweeping “709 crackdown” on human rights lawyers that began in July 2015.

Some 300 human rights defenders were detained during the campaign.

Li gained prominence representing political dissidents in China, including the blind legal activist Chen Guangcheng, rights attorney Gao Zhisheng and members of the Falun Gong spiritual movement, which is banned on the mainland.

His sentence allowed for his release, but he will be unable to practise law in the near future.

Li, who is a Christian, weighed only 51kg after his release, his friends said.

He spent more than 10 days putting on weight before he returned home to his family, according to friends who met him this week.

“He survived unspeakable cruelty in those 600-plus days, including having his wrists bound together with his ankles 24/7 for more than a month. Yet we don’t see hatred in his eyes.

“He couldn’t recognise himself when he looked in the mirror … his hair was all white and he had aged a lot, along with the dramatic weight loss in those two years,” his friend said.

Syria: Don’t be fooled: Assad is no friend of Syria’s Christian minorities

Last week, during a markup of the House Foreign Affairs Committee, Congressman Dana Rohrabacher asserted that the Assad regime was “the protector of the Christians” in Syria.

As Syrian Christians who grew up in Syria, we would beg to differ. Hundreds of innocent Christians seeking freedom have been tortured to death in Assad’s jails or shot to death by his brutal thugs – including the activist Bassel Shehadeh, who was killed at a protest, then killed in spirit because Assad forces prevented his friends from going to church to pray for his soul. Human rights lawyer Khalil Maatouk has been detained in Assad’s jails in Damascus for over four years for the “crime” of defending detainees in Assad’s jails.

These anecdotes are not new and are not isolated incidents.

China: China Desk: My husband was tortured by the Chinese authorities

China Desk is a regular round-up of the voices and issues that may have been overlooked in the day-to-day reporting of Chinese affairs.

In this first edition of Newshour’s China Desk: The BBC’s John Sudworth speaks to Wang Qiaoling, wife of the human rights lawyer Li Heping, who was detained by the Chinese authorities in 2015. She alleges that her husband was severely tortured by the Chinese authorities during his detention. Earlier this week Li Heping was given a suspended prison sentence, and returned home for the first time since his arrest.

India: As Justice Karnan Fights His Legal Battle, His Safety, Well-being Must Be Ensured

Ever since the Supreme Court of India passed the order on 9th May, 2017 of arrest of Justice C.S. Karnan, a judge of the Calcutta High Court, he has been rendered untraceable. Since the Supreme Court order had put press censorship of sorts,rumours are afloat about Justice Karnan’s whereabouts. A disinformation campaign has been launched in the mainstream media to the effect that Justice Karnan is in Tamilnadu one moment and Andhra Pradesh the next; that he has fled the country and gone to Nepal or even Bangladesh. He is being painted as a fugitive on the run. Naturally there are fears in the minds of all democratically minded human rights activists about the wellbeing of Justice C.S. Karnan who has every right to defend himself legally even at this stage.

Pertinently since he had been championing the cause of action against corruption in the higher judiciary and had been openly petitioning to various authorities on the issue he would naturally become a marked man. The vested interest would naturally like to exploit the circumstances in which Justice Karnan finds himself. All efforts should be made to ensure his safety. After all Justice Karnan ostensibly has the evidence of corruption against the higher judiciary. Additionally the extreme public humiliation faced by Justice Karnan may create a situation whereby he may be forced to end his life.

Five judges who were dismissed from profession with decrees issued by the Turkish government in the aftermath of a coup attempt on July 15, 2016, were arrested on Thursday.

According to Cumhuriyet daily, the five judges, who were detained on Friday, testified to a court in Antalya, which handed down the arrest decision for “coup plotting” and “membership in a terrorist organization,” in reference to the Gülen movement. Detention warrants had been issued for the judges over their alleged links to the movement.

Over 145,000 people, including over 4,272 judges and prosecutors, have been purged from state jobs in Turkey due to their alleged ties with the Gülen movement, which the Turkish government also accuses of being behind the failed coup on July 15, 2016.

Turkey survived a failed military coup attempt on July 15, 2016 that killed over 240 people. Immediately after the putsch, the Justice and Development Party (AKP) government along with Turkey’s autocratic President Recep Tayyip Erdoğan pinned the blame on the Gülen movement despite the lack of any evidence to that effect.