LAWYERS IN TURKEY UNDER ATTACK

Held on January 24th each year since 2010, the Day of the Endangered Lawyer provides an opportunity to learn about the personal and professional safety of lawyers in a selected country facing persecution, prosecution, arbitrary detention, threats, torture, assaults and death as a consequence of carrying out their professional duties. The focus this year is on lawyers in Turkey. Between July 2016 and 1 January 2019 alone there have been 594 lawyers arrested, 1546 prosecuted and 216 sentenced to a total of 1,361 years in prison.

Presentations by Brian Samuels Q.C., Ozge Yazar and Mehmet Kilic will be followed by Q & A

Erdogan gets infinite authority over the national and provincial bar associations – The Arrested Lawyers Initiative https://t.co/y8CiuRriCR 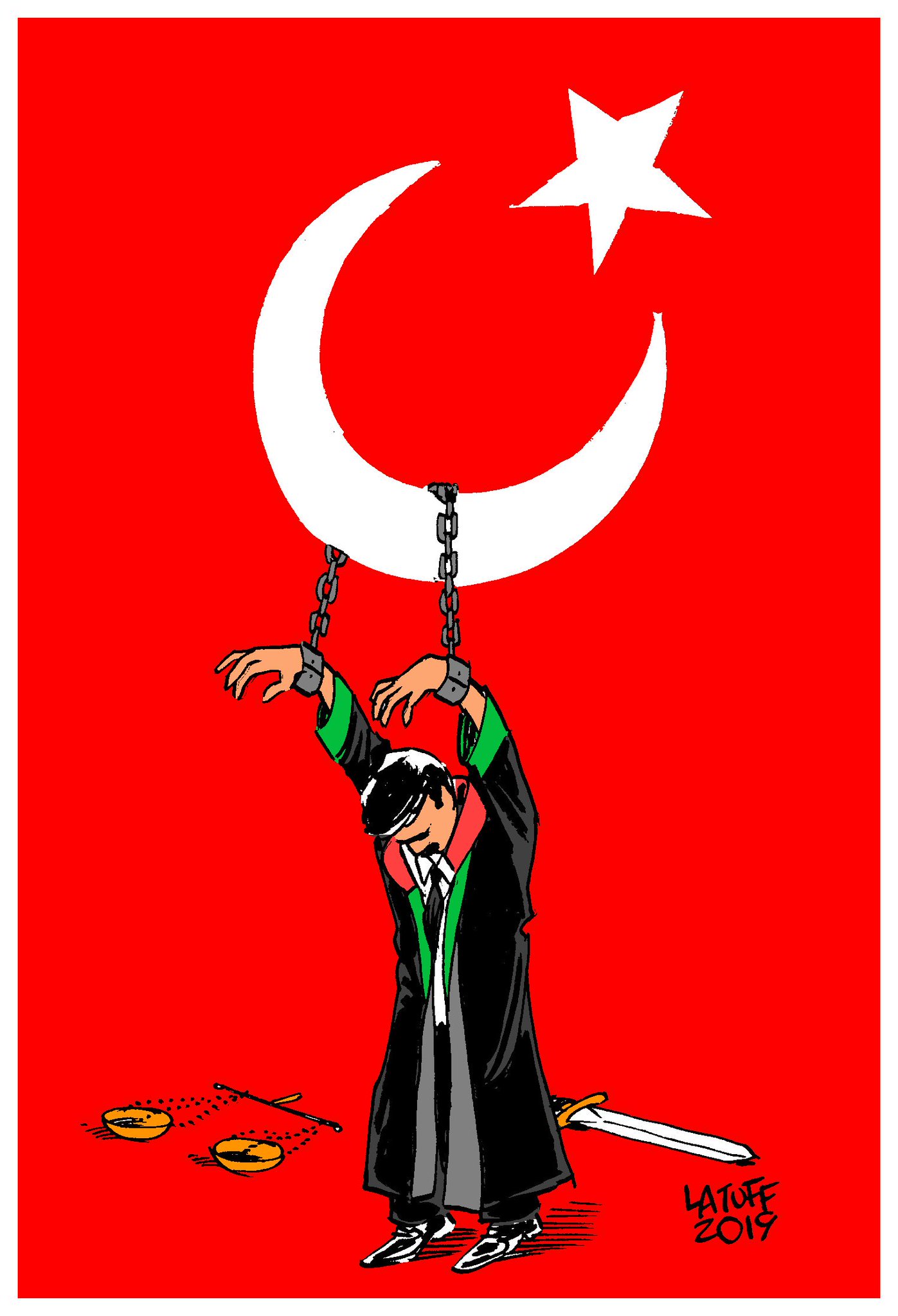 Mohamed Ramadan, a lawyer and worker advocate, has been held in solitary confinement in the Borg el-Arab prison in Egypt for more than a month. His wrong? Have posted a photo of him on Facebook wearing a yellow vest in reference to the French movement. He is now accused of “joining a terrorist group and promoting his ideas “.

With our correspondent in Alexandria, François Hume-Ferkatadji

The Frontline defenders NGO published a damning report on Thursday, 17 January, the fruit of several months of work, on the repeated attacks against strikers, trade unionists and lawyers defending labor rights in Egypt. Enforced disappearances, beatings, acts of torture or immediate dismissals, the actors of the social movements are the targets of the regime.

Mohamed Ramadan is a well-known lawyer, who regularly opposes human rights violations in Egypt.On December 10, he puts on a yellow vest and takes a picture of himself. He posted it on Facebook before disappearing a few hours later.

” After his day at the court, he did not go home. He was not at his desk and we could not reach him, says his lawyer and friend Mohamed Awad. We, as lawyers, started looking for him in hospitals, police stations, but could not find him. It was only the next morning that we learned of his arrest. He was in the prosecutor’s office. “

@EgyptEmbassyUSA she was last seen before the public prosecution on 22 November 2018, since then, human right lawyer – Hoda Abdelmoniem's has been in hidden detention. Help reveal her whereabouts and ensure her release. Unidentified gunmen on board a motorcycle shot dead a former female prosecutor on Thursday night in Barangay Kamputhaw here.

Former Cebu City Assistant City Prosecutor Mary Ann Castro was driving a yellow Nissan Juke along Escario Street around  9:50 p.m. when one of the gunmen reportedly shot her.

After the shooting, the vehicle swerved across the street and hit the galvanized iron sheets used to cover a construction site.

Physicians could no longer detect any vital signs from Castro when the medical team arrived at the crime scene.

According to police investigators, witnesses heard five bursts of gunfire in the area and saw the vehicle swerving toward a construction site.

The Inquirer tried to talk to the victim’s nephews and nieces who arrived at the crime scene shortly after the shooting, but they refused to give a statement.

The police have yet to determine the motive of the killing, but Castro had been reportedly embroiled in several controversies when she was assigned in Cebu City.

N.B.: With the killing of Mary Ann Castro, lawyer and former Assistant Prosecutor for 18 years, the toll on lawyers rises once more. This killing occurred despite the presence of additional police on the streets of Cebu City due to festival activities. There have been 48 murderous attacks on Filipino lawyers and law workers under the Duterte regime, July 1 2016 to the present, a period of almost 31 months. Here are relevant up to date figures compiled by the Monitoring Committee on Attacks on Lawyers of the international Association of People’s Lawyers:

48 murderous attacks on Filipino lawyers and law workers
There have been 7 survivors (6 lawyers and 1 prosecutor).

Authorities in the southwestern Chinese region of Guangxi have raided a legal consultation company started by disbarred human rights lawyers and ordered it closed, RFA has learned.

Dozens of police officers on Tuesday raided the China Lawyers’ Club set up last September by Tan Yongpei, a former rights attorney stripped of his license by the local justice bureau for taking on too many “sensitive” human rights cases.

“There were more than 30 police officers, as well as officials from the civil affairs and justice bureaus, so 40-50 people in total,” Tan told RFA. “They told us we couldn’t hang up our sign, and that we are an illegal organization of banned lawyers.”

If the club continued to operate, members were warned that further action would be taken.

Police then went around the premises taking photos and left, after which Tan said he rehung the sign.

The club had initially lodged an application with the bureau of civil affairs to register as an organization, but was rejected, Tan said.

“They are afraid that Chinese lawyers may later form a political opposition, maybe a political party,” he said.

Tan said he plans to lodge an official complaint with the civil affairs department and to apply once more to have the club’s registration approved.

Mehmet Daimagüler, one of the lawyers for the families of victims in Germany’s notorious National Socialist Underground (NSU) case, says he would take the case to the European Court of Human Rights.

Addressing a conference on the NSU and racism in Germany at Bahçeşehir University in Istanbul yesterday, Daimagüler said he did not trust German courts and did not expect much from the legal process in Germany regarding the neo-Nazi gang.

The NSU, composed of three members, were behind the murders of eight Turkish and one Greek immigrant and a German policewoman between 2000 and 2007. Two members killed themselves when the police closed in on them, while the sole surviving member, Beate Zschaepe, was sentenced to life in a trial that concluded last year.

“I don’t trust German courts and that’s why we filed a compensation lawsuit [for the victims]. If the German government, state administrations did their jobs properly, if police did not look into the murders through a racist angle, people would not get killed,” the lawyer said.

The lawyer said he was certain cases against the NSU would be “lost,” referring to appeals to the sentence for Zschaepe and the gang’s accomplices who got away with lenient sentences. “But we will take these cases to the European Court of Human Rights afterwards,” he said.

Daimagüler also spoke about threats the lawyers of victims faced. “I’ve received about 1,600 threats so far but I didn’t take them seriously. Barking dogs seldom bite,” he added. However, he expressed concern about threats to fellow lawyer Seda Başay Yıldız. “It was discovered that threats were linked to a police station and had everything from the address of her residences to the address of her parents. It is also a big scandal that police told Yıldız that they can’t protect her properly and suggested she buy a gun to defend herself,” he said. The Indian government intensified its harassment and at times prosecution of critics in 2018, Human Rights Watch said today in its World Report 2019. Authorities used draconian sedition and counterterrorism laws to silence peaceful dissent, and foreign funding regulations and other laws to discredit and muzzle nongovernmental organizations critical of government actions or policies.

In a landmark decision in September, however, the Supreme Court decriminalized consensual adult same-sex relations, paving the way for full constitutional protections for lesbian, gay, bisexual, and transgender (LGBT) people. The ruling opened the door for reform in other countries with British colonial-era sodomy laws.

“The room for dissent in India is getting ever smaller, and anyone who criticizes government actions can become a target,” said Meenakshi Ganguly, South Asia director at Human Rights Watch. “Authorities seem more interested in silencing activists and journalists than in addressing the problems they bring to light.”

In the 674-page World Report 2019, its 29th edition, Human Rights Watch reviewed human rights practices in more than 100 countries. In his introductory essay, Executive Director Kenneth Roth says that the populists spreading hatred and intolerance in many countries are spawning a resistance. New alliances of rights-respecting governments, often prompted and joined by civic groups and the public, are raising the cost of autocratic excess. Their successes illustrate the possibility of defending human rights – indeed, the responsibility to do so – even in darker times.

Police in Maharashtra state arrested 10 civil rights activists, lawyers, and writers, accusing them of being members of a banned Maoist organization. By the end of the year, eight were still in jail and one was under house arrest.