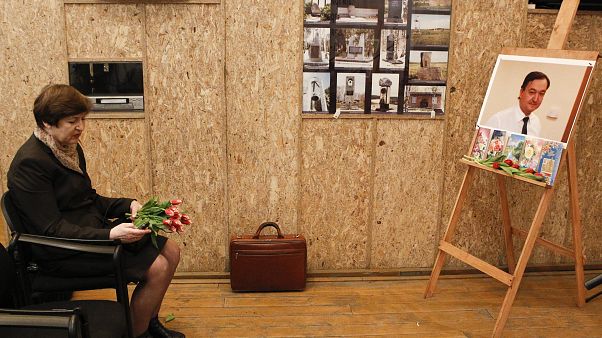 In a unanimous judgment, the European Court of Human Rights today delivered a comprehensive rebuke to Russia over the 2009 death in pretrial detention of Sergei Magnitsky, the accountant who had previously exposed a $230m tax fraud involving officials of Russia’s powerful Interior Ministry.

Responding to complaints brought by his mother and widow, the Strasbourg court ruled that Russia was responsible for Magnitsky’s death, and had subjected him to “intentional” acts of “violence…that amounted to inhuman and degrading treatment”.

This included persistently denying him medical treatment for a life-threatening illness, and a beating by guards just before he died.

The court also ruled that Russia’s investigation into Magnitsky’s death and abuse was inadequate, and that the government’s decision to put him on trial on corruption charges after his death was a manifest breach of the rule of law.

The ruling represents the first fully independent assessment of a case that has led to the imposition of sanctions by the United States and Canada against senior Russian officials accused of complicity in Mr Magnitsky’s death.

At the time of his death, Magnitsky had been held in pretrial detention for 358 days, while supposedly under investigation by the same Moscow Interior Ministry officers he had originally accused of corruption. The court ruled that the period of detention had been unreasonably extended by the Russian authorities, “on grounds which cannot be regarded as ‘sufficient’ to justify its duration”.

After a monthlong hunger strike, it’s a struggle for Lyubov Sobol to even raise her hands. Every gesture is difficult for the frail 31-year-old political activist.

This summer’s wave of anti-government protests in Moscow propelled her to the forefront of Russia’s opposition movement. Her name rang out on the streets of the capital, packed with demonstrators angered by the refusal of election authorities to allow independent candidates, including Sobol, on the ballot for the Moscow Duma, or city council.

Sobol has been the prime target of attacks by both the Kremlin-friendly media and election officials.

“The attitude to me is different because I work harder than others and I don’t let people get away with lies,” Sobol told The Associated Press. “I’m not afraid of telling people to their face what I think of them.”

Moscow has been gripped by weekly protests for more than a month over the nearly two dozen candidates from across the political spectrum who have been excluded from the Sept. 8 election.

The numbers continue to grow: the Aug. 10 rally was Russia’s biggest in eight years, and heavy-handed police tactics against peaceful protesters illustrates just how jittery the Kremlin is about the movement. More than 2,000 people were detained, and videos of riot police beating protesters were widely circulated.

Kremlin spokesman Dmitry Peskov broke a month of silence Monday, praising the police and saying President Vladimir Putin has not spoken on the subject because he views the rallies as too insignificant to worry about.

Sobol, bespectacled and with a pony tail of platinum blond hair, has emerged in what has mostly been a leaderless movement, galvanized by the authorities’ disregard for voters’ rights. Protesters have been chanting her name at the rallies as well as slogans rich with wordplay: Lyubov literally means “love” in Russian.

A graduate of Russia’s most prestigious law school, she has been behind some of the most visible anti-corruption investigations run by the country’s undisputed opposition leader, Alexei Navalny. 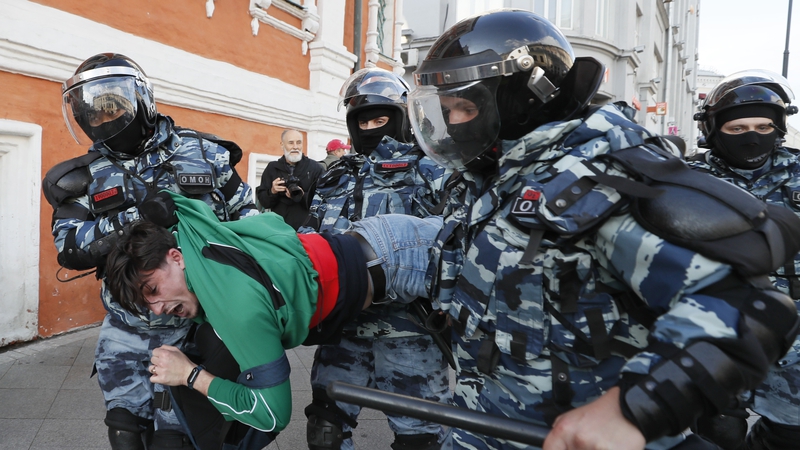 Nearly 50,000 opposition supporters rallied and dozens were arrested in Moscow at one of the largest authorised protests since President Vladimir Putin’s return to the Kremlin in 2012.

Demonstrators crowded the central Prospekt Andreya Sakharova street, where city authorities deployed a massive police presence, including officers in riot gear, after giving permission for the rally to go ahead.

The White Counter, an NGO that tracks participants in rallies, counted 49,900 people, while Moscow police gave a much lower attendance figure of 20,000.

A total of 71 people were detained in Moscow and a further 80 were arrested in Russia’s second-largest city of Saint Petersburg, according to OVD-Info, an NGO that monitors detentions at protests.

In recent weeks, thousands have attended street protests calling for free and fair elections after the exclusion of several opposition figures, including allies of top Putin critic Alexei Navalny, from local Moscow polls next month.

While the rally was authorised, Mr Navalny, who is currently in jail, had urged supporters to walk peacefully through the city afterwards.

The latest demonstration came this week as authorities mounted their harshest attack yet on Navalny’s team, focusing on his anti-corruption foundation which publishes investigations of officials close to Mr Putin.

One of the foundation’s lawyers, Lyubov Sobol, was detained Saturday at her campaign office by police in riot gear, she wrote on social media.

Riot police also raided the studio where Navalny’s supporters were set to run a live broadcast of the protest, activists said.

Russia: Moscow: searches, arrests and beatings ahead of new protests

In an attempt to bring down the upcoming wave of protests, Russian authorities are using more stringent methods

Repression continues against protesters and opponents of President Putin in Moscow.

On August 7, a search was conducted at the Anti-Corruption Foundation, led by Russian opposition leader Aleksey Navalny,  Mediazone reported.

Five lawyers of the foundation were forcibly taken in for interrogation in cases of money laundering, one of them was beaten.

Computers and other office equipment were seized as well. The foundation’s accounts have been seized – meanwhile, Alexey Navalny himself is under arrest.

Lyubov Sobol, one of the few protest leaders who has remained at liberty and one of the candidates not allowed to register for the upcoming Moscow Duma elections, tweeted:

“[The foundation’s] accounts have been blocked in order to 1. obstruct the work of [the foundation], and to prevent us from paying fines of those illegally detained in the protests. Hence the rush. The level of political pressure has increased many fold. In any case, the foundation will continue its work.”

Moscow: searches, arrests and beatings ahead of new protests 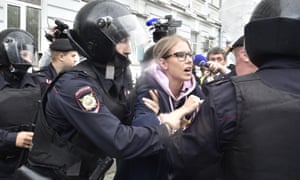 Riot police in Moscow made mass arrests on Saturday in an attempt to quash a protest rally that had been banned by authorities.

The rally was the latest episode of a nascent protest movement, triggered by a refusal to let opposition candidates stand in Moscow parliamentary elections, which has led to the biggest political protests in Russia for years.

During the protest on Saturday afternoon, police detained about 828 people, according to the independent monitoring group OVD-info.

The Russian capital was on lockdown as authorities closed off access to the central boulevard ring, where protesters wanted to march, blocked mobile internet reception in large parts of the capital and kept an eye on protesters from a helicopter overhead.

Lyubov Sobol, the only opposition politician who wanted to stand in September elections not currently in jail, was detained by police before she could even arrive at the protest.

Sobol, who is three weeks into a hunger strike in protest at the lack of access to the ballot, gingerly emerged from her campaign headquarters to get into a waiting taxi, but was pulled out by riot police, who dragged her to a waiting bus while she shouted out in protest.

Russia: Alexei Navalny: the lawyer standing up to Putin 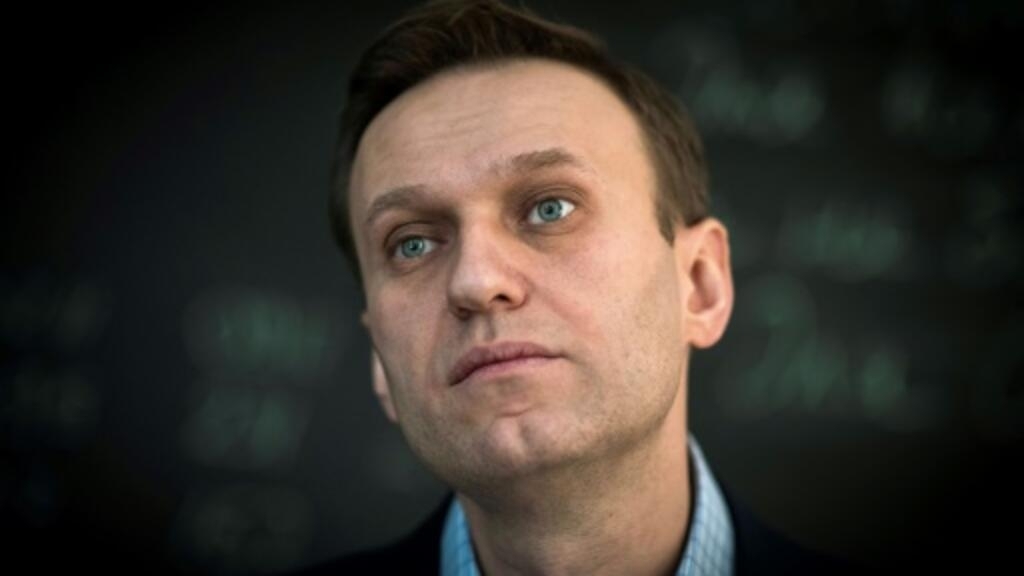 A charismatic anti-corruption campaigner, Alexei Navalny has been Russia’s leading opposition politician for around a decade, determined to challenge Vladimir Putin’s grip on power despite frequent prison stays and even damage to his health.

The Yale-educated 43-year-old lawyer has been banned from state television and was barred from challenging Putin in a presidential election last year.

He has often been jailed and physically attacked, but has vowed to press ahead with his campaign to change Russia for the better.

Navalny has won a young fan base through viral videos exposing corruption among the elites and has more than two million followers on Twitter.

He has grabbed attention with his uncompromising rhetoric and coined phrases such as the “party of crooks and thieves” to slam the ruling party United Russia.

In 2011, the anti-corruption blogger led mass protests when tens of thousands took to the streets of Moscow to protest against vote-rigging in parliamentary elections.

In 2017, he accused Prime Minister Dmitry Medvedev of massive corruption in a YouTube documentary. That kick-started a fresh wave of protests across the country that was met with police violence and mass arrests.

The same year he had to travel to Spain for surgery after one of several street attacks left him nearly blind in one eye.

Navalny has faced a series of legal cases, which supporters see as punishment for his activism.

Russian opposition leader Alexei Navalny has been released from hospital and taken back to prison pic.twitter.com/Sh2jhW1lDm

Alexei Navalny: The lawyer standing up to Putin https://t.co/jj64L4FN4c pic.twitter.com/u8yzaTfvOm

"This was a chemical substance – even the doctors here have admitted that." Russian authorities have brought unfounded terrorism charges against 24 Crimean Tatars, 20 of whom were arrested during heavily armed raids on their homes in the spring of this year, Human Rights Watch said today. Security officers tortured four of the men, denied lawyers access to search sites, planted evidence, and later briefly detained two activists who spoke out on behalf of the arrested men.

Crimean Tatars are a Muslim ethnic minority indigenous to the Crimean Peninsula. Many openly oppose Russia’s occupation, which began in 2014.The crackdown in the spring of 2019 is the latest in a pattern of repression to smear peaceful activists as terrorists and to stifle dissent in occupied Crimea. Russian authorities should release the activists and stop misusing the country’s overly broad counterterrorism legislation to stifle freedom of opinion, expression, and religion.

Human Rights Watch visited Crimea from May 17 to 20 and interviewed 16 relatives of 9 of those arrested, 5 lawyers representing some of them, and a leading activist with Crimean Solidarity, which provides aid to families of individuals arrested on politically motivated charges. Human Rights Watch also examined some legal documents and seven search sites, including the places where banned books or brochures had been allegedly planted. One lawyer, who is based in Moscow, was interviewed by phone.

Most of the 24 men arrested were active in Crimean Solidarity, a loose association of human rights lawyers, relatives, and supporters of victims of political repression. All have been charged with association with Hizb ut-Tahrir (Party of Liberation), the controversial pan-Islamist movement that is banned in Russia as a “terrorist” organization but is legal in Ukraine. Hizb ut-Tahrir seeks the establishment of a caliphate but does not espouse violence to achieve its goals.

Police in Moscow detained dozens of demonstrators who rallied in front of the Supreme Court to show solidarity with four Crimean Tatars sentenced to lengthy prison terms on terrorism charges. https://t.co/ZSqyAHWnFp pic.twitter.com/6E87G7edRf

Overview of the situation in Crimea. May 2019