Family of a Doda based lawyer and social activist, Babur-ul-Islam Nehru has expressed concern over his safety saying he is in police custody since 22 July “without any charges.”

“He was picked from outside masjid and taken to police station Gandhi Nagar. Later he was shifted to another police station and now he is presently lodged in Akhnoor police station,” said Babur’s younger brother. Abdul Mateen Nehru,

The family claimed that in last two weeks, Babar has been shifted to three different police stations.

“When I went to meet him at the police station, he told me that  a senior police officer had visited him and told him that he is a threat to peace. I don’t know how he is a threat, when he was doing his regular job and social work,” Mateen informed.

The Akhnoor police station, has confirmed that he is in their lockup, “Yes, he is in our police station.” When asked about the charges on which he has been detained he told that “it is confidential and can’t tell it over the phone.”

Jammu and Kashmir Police Friday said that it has arrested two persons including a lawyer involved in the murder of People’s Democratic Party District President Pulwama Abdul Gani Dar.

Dar was shot dead by gunmen near Pahoo village of Pulwama district when he was on way towards Srinagar on April 24.

Sources said that the vehicle used by militants during the time of attack have also been seized by police. SSP Pulwama Mr Rayees Ahmed Bhat told news agency CNS that two persons including a lawyer have been arrested. He identified the duo as Advocate Bashir Ahmed Rather and Muhammad Aslam Malik.

“Advocate Bashir Ahmed Rather was in touch with militants and his role has been established. There is little bit of involvement of another accused Aslam Malik,” he said adding that investigation has been going on. 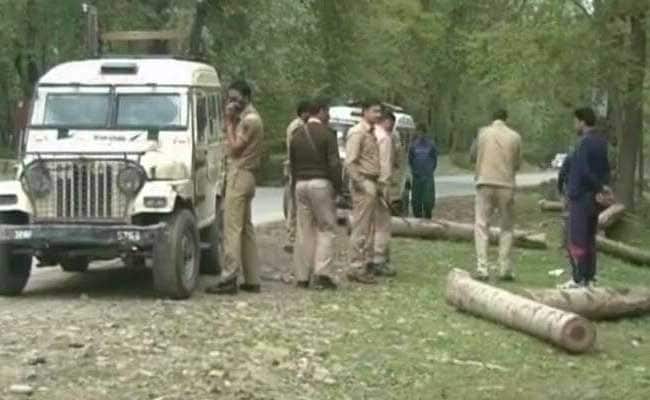 “Khan was sacked at multiple times from a close range at his house”, a senior police official said, adding, “He was immediately taken to the nearby hospital by family”.

Advocate Imtiyaz Ahmad Khan was shot at and critically injured by unidentified gunmen in Pinjura village of Shopian.

Sources said that Imtiyaz was associated with National Conference.

A former law officer and an ex- militant were gunned down in separate incidents in the Kashmir valley this evening, police said.

The first incident took place at Pinjoora village in Shopian in south Kashmir when militants fired at former public prosecutor and advocate Imtiyaz Ahmed Khan when he was stepping out of a local mosque after offering last prayers of the day, police said.

Khan, who was associated with opposition National Conference, was rushed to a nearby hospital where he was declared dead, they said.

In the other incident, militants shot dead a former counter-insurgent Abdul Rashid Parray alias Rashid Billa in Hajjan in north Kashmir’s Bandipora district, taking the number of such killings to three in the last 24 hours, police said.

They said Parray received four bullets and died on the spot. He was a commander of counter-insurgent force known as ‘Ikhwan’.

A bench of Justice Muzaffar Hussain Attar while quashing detention order against the detainee issued by District Magistrate Doda, directed the government to release Babar forthwith from preventive detention.

The Jammu and Kashmir High Court has quashed detention of Advocate Hassan Babar, a leader of Anjuman-e-Islamia and a human rights activist of Jammu’s Doda district. Babar was arrested by police and was booked under Public Safety Act on August 14 this year.

A bench of Justice Muzaffar Hussain Attar while quashing detention order against the detainee issued by District Magistrate Doda, directed the government to release Babar forthwith from preventive detention.

Terming the spree of arrests, nocturnal raids, as “clear sign of frustration and undemocratic attitude” of state government, spokesman of the JKLF, in a statement today, said, “Police arrested JKLF vice-president for district Kulgam Assadullah Sheikh at Ramban when he was travelling along with his fruit vehicle towards Jammu.”  “He was brought to police station Devsar and immediately booked under PSA and shifted to Kuthwa jail. Truck laden with fruit has also been seized and kept at same police station. It can cause damage to the fruit. Kulgam police has also arrested and detained the organizer of a religious organization Moulana Arshid Qadri,” the statement said.

“Ailing chairman JKLF Muhammad Yasin Malik is languishing in jail from July 8, and after his arrest he has been kept in solitary confinement. Similarly JKLF zonal president Noor Muhammad Kalwal and JKLF activists, Fayaz Ahmad Mir from Ganderbal and Shabir Ahmad Ganaie of Kakapora Pulwama, Mushtaq ahmad Mir of Kupwara, and Assadullah Sheikh after being booked under PSA have been shifted to Jammu. The JKLF vice chairman advocate Bashir Ahmad Butt along with zonal vice president Muhammad Yasin Butt and senior member Muhammad Amin Magloo are lodged at Rajbagh police station,” he said.

The Jammu and Kashmir government has made a series of arrests under the draconian Public Safety Act (PSA) to quell the ongoing protests in the valley and those, who have been detained without trail, include a psychiatric patient, an aid worker, and a human rights activist.

According to sources, more than 250 people, including separatist leaders and stone pelters, have been detained under what Amnesty International termed a “lawless law”, under which a person can be detained without a trial for at least six months.

Towards the end of August, Hassan Babar Nehru, head of the NGO Ababeel and a lawyer based in the mountains region of Doda in Jammu, was arrested and booked under the PSA. A fierce critic of present the state administration he had, according to his colleague, “exposed” lapses of the district administration by protesting outside Deputy Commissioners office against non-implementation of decisions taken for welfare of the people of the district. “It is an act of vengeance of the administration, nothing else,” Syed Asim Hashmi, president, Doda Bar Association, toldFirstpost.

Those who know Nehru, describe him as a passionate aid worker who slept in a truck for five days during the relief carried out in the initial days of 2014 floods in Kashmir. And most recently, he had been involved in evacuating victims of traffic accidents, Doda had the highest rate of road accidents in entire Jammu and Kashmir.