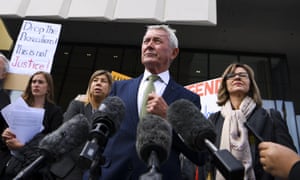 Australia’s negotiations with Timor-Leste should be the subject of a royal commission, and the government should return $5bn unfairly taken from the impoverished nation, a parliamentary inquiry has been told.

It should also drop the prosecution of Witness K and Bernard Collaery, who revealed the now infamous bugging of Timorese delegates during negotiations on what became the CMATS treaty.

A Senate standing committee is examining decisions made by Australia in 2002, amid fractious maritime border negotiations with Timor-Leste, to withdraw from the jurisdictions of the International Tribunal of the Law of the Sea (ITLOS) and the International Court of Justice (ICJ).

Among the seven published submissions – none of which come from the Australian government – high profile Timorese organisations, allies and academics, supported the return, and called on Australia to be held accountable for its conduct.

Submissions also called for the government to drop the prosecutions of Witness K and Bernard Collaery.

Bracks and academic Clinton Fernandes noted it occurred around the time that Jemaah Islamiyah terrorists bombed Australia’s embassy in Jakarta.

“Surely our Asis resources should have been targeting the ‘war on terror’, and not facilitating Australia’s economic exploitation of a friendly, desperately poor and recently traumatised neighbour?” Bracks said.

Timor-Leste later sought to have the CMATS treaty terminated by the Hague after the bugging operation was revealed in 2013, but Witness K was prevented by Australia from attending the hearing to give evidence, and both he and Collaery have faced charges in extraordinarily controversial circumstances.

Bracks said he had “no doubt” that Xanana Gusmao would not have signed the treaty had he known Witness K and Collaery would be charged soon after.

Submissions to the inquiry have closed, although requests for an extension can be made. A report is expected on 28 November.

East Timor Prosecutions Public Forum: The secret prosecution of Witness K and Bernard Collaery for national security offences. This public forum will raise the debate through the lens of highly qualified speakers.