The Philippines: NUPL-Panay condemns attack on colleague in Capiz

BREAKING: A lawyer in Capiz was reportedly ambushed this morning. Atty. Cris Heredia of NUPL Panay, also a known anti-mining activist was with her daughter and her client.

The National Union of People’s Lawyers (NUPL-Panay) condemns in no uncertain terms the attempted ambush on our colleague, Atty. Cris Heredia, at around 11:30 am today. She was driving her car together with her daughter and her client when shots rang. She posted the incident stating she was just ambushed and that her car got two bullet holes. The attack happened in Panit-an, Capiz. She just came from a hearing.

We are still waiting for details on the incident.

NUPL-Panay holds State forces for the attack, particularly, the AFP and PNP under the Duterte administration. Atty. Heredia has been red-tagged in posters and has been personally threatened by a military agent who visited her office and warned her to slow down on her human rights advocacy.

Atty. Heredia used to be a cultural worker who performed musical numbers during protest action. Aside from lawyering, she does some painting jobs and has held one-person exhibits in Iloilo City and Roxas City.

Since July 2019, when Pres. Rodrigo R. Duterte came to power, attacks against lawyers have mounted, 47 deaths as of this time. The figure also includes judges and public prosecutors.

The attempt on Atty. Heredia came a day after the media ran stories of lawyers worldwide asking the Duterte administration to protect Philippine lawyers.

NUPL-Panay lawyer Atty. Criselda Heredia was reportedly ambushed by a lone gunman onboard a motorcycle in Roxas City, Capiz. According to initial reports, Atty. Heredia was inside a car with her daughter and a client when the incident occured today, at around 11:30am on September 23. There were two bullet holes in Atty. Heredia’s car, but all three were unharmed. They came from a hearing when their car was fired at by the assailant. They are now at a police station to file a report on the incident.

Atty. Heredia is a known anti-mining activist and a human rights lawyer. She was subjected to prior incidents of harassment, including the tailing incident in November 2018 when supporters and friends from progressive groups went to visit the wake of slain human rights lawyer Atty. Ben Ramos. On December 11, 2018,  Atty. Heredia was among the 11 NUPL-Panay lawyers whose photo appeared in a poster seen along Guanco Street in Iloilo City. The caption was: “Minions of the Community Party of the Philippines.” We reiterate that such cases of red-tagging lead to worse forms of violations against the victims, including extrajudicial killings. Human rights lawyer Atty. Benjamin Ramos was also red-tagged prior to his killing, with his face likewise included in posters with malicious messages.

(Photo: A picture of the poster which red-tagged Panay lawyers. A photo of Atty. Heredia was included in the malicious poster, found in the lower right of the said poster)

We condemn this latest attack against human rights lawyers.  This is indicative of the deteriorating human rights situation in the country where all critics who raise legitimate demands, including human rights defenders, are deemed as targets. We attribute this attack to the vicious and ruthless state forces of the Duterte government, given Atty. Heredia’s work and advocacy for political prisoners and for the marginalized. Following the killing of Atty. Ben Ramos and the continuing harassment of many human rights lawyers, we echo the demand to stop the attacks against people’s lawyers!

Mahienour el-Massry has been tried and jailed twice for taking part in anti-government demonstrations. 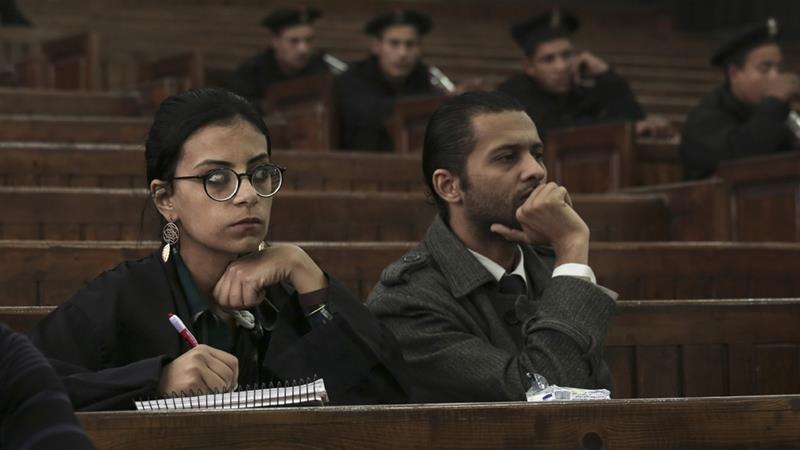 Mahienour el-Massry was arrested as soon as she left the state security prosecutor’s headquarters in the capital, Cairo, where she acted as the lawyer for several people detained during the demonstrations, her lawyer Tarek al-Awadi said.

Hundreds of Egyptians took to the streets in Cairo and several other cities across the country on Friday to call for el-Sisi’s departure.

According to the Egyptian Centre for Economic and Social Rights, 365 people have since been arrested.

El-Massry, a political activist and human rights defender, has been tried and jailed twice for taking part in protests.

In December 2013, following the army’s overthrow of president Mohamed Morsi following mass protests, she was arrested and imprisoned until September 2014 on charges of participating in a demonstration without a permit.

While in prison, el-Massry received the Ludovic Trarieux Award, an international prize given annually to a lawyer for contributions to human rights.

In 2015, el-Massry was handed a year-long sentence for taking part in a sit-in during Morsi’s rule.

Egyptian lawyer & human rights activist Mahienour el-Masry was kidnapped today in front of supreme state security prosecution headquarter in Cairo. El-Masry was seen being forcibly dragged into a security van as she was leaving the building.#EgyptProtests #Tahrir_square #Egypt pic.twitter.com/F30WkKyTWw 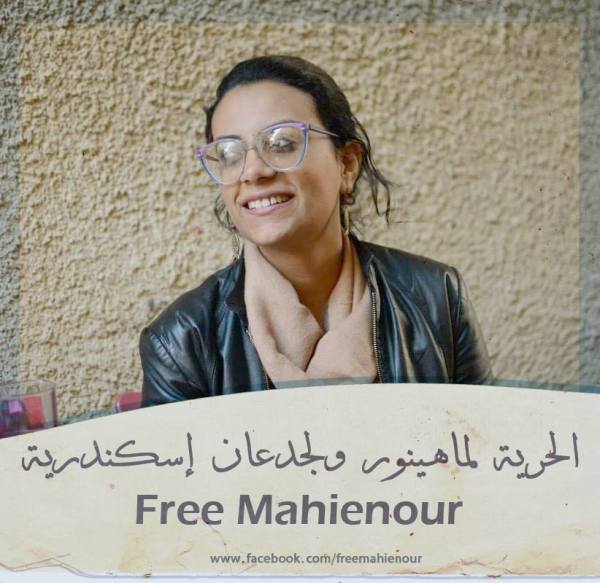