Indonesian police have asked ­Interpol to help track down an ­Indonesian human rights lawyer — understood to be living in Australia — who is facing charges of having “incited” recent violent protests across West Papua.

East Java police on Wednesday booked VK, believed to be lawyer Veronica Koman, as a suspect for incitement following riots in East Java, Papua and West Papua since August 18.

Police say they have sufficient evidence taken from her Twitter account and statements from people in Papua confirming that she was very active in relaying ­information related to Papua. “We first called VK in as a ­suspect but she didn’t show up. We believe she is abroad so we will work with the national intelligence agency and Interpol to ­appre­hend her,” East Java police chief Luki Hermawan said in ­Surabaya.

Ms Koman was not physically in Papua during the riots but “proactively provoked the public” through her Twitter account, a police spokesman said.

Police referred to her August 18 tweet calling out “monkeys to fill the streets of Jayapura” after an incident the day before saw Papuan students in Surabaya verbally abused by civilians.

Ms Koman would be the third suspect booked for inciting violence after police questioned two others for allegedly hurling racial abuse and intimidating a group of Papuan students at a dormitory in Surabaya, East Java.

The Legal Aid Institute in Jakarta has strongly “condemned” this latest move by the police.

The Philippines: Extortion’s head surfaces in threats vs Cebu lawyers

A Cebu-based human rights lawyer may have stumbled upon an extortion racket targeting lawyers involving threats to the lawyers’ lives.

Lawyer Magdalena Lepiten said a certain Bobby, who claimed being from Davao, called her at 9:39 a.m. on Tuesday (Sept 3) to tell her that she was on a kill list.

“Si Bobby ni, taga Davao. naa kay time makig istorya? (This is Bobby of Davao. Do you have a time to talk to me?),” the caller told Lepiten.

“Naa ka sa listahan sa nga among ipa tumba. Naa koy mga tawo sa Cebu. (You’re on the list of those we wanted to kill. I have people in Cebu).

Lepiten said she did not entertain the caller and instead turned off her phone.

Moments later, she said she received a text message from the same caller with contact number 09971779161.

Lepiten said he wanted to know if other lawyers received a similar threat.

The detained leader of the Cameroon Renaissance Movement Party Maurice Kamto and his allies have threatened to boycott their Friday September 6 court session unless the natural public, the national and international press are granted access.

In a letter addressed to the President of the Yaounde Military Tribunal, Maurice Kamto and allies disclose they are willing to appear in court on the condition that access is granted to the “real public” throughout the duration of their trial.

“Justice being given on behalf of the Cameroonian people, besides the traditional “public” made up of the military and other elements of the security forces expressly requisitioned to prevent citizens from being present in the courtroom, it is our precious desire that free access be granted to the real public in the courtroom throughout the duration of the trial, as well as the authorization of access to the courtroom for the public and private, national and international media.”

Maurice Kamto was arrested alongside some of his allies on January 29, 2019 after launching protest marches across the country.

India: Bar Associations Are Not Supposed To Settle Disputes By Resorting To Strikes : SC [Read Order] 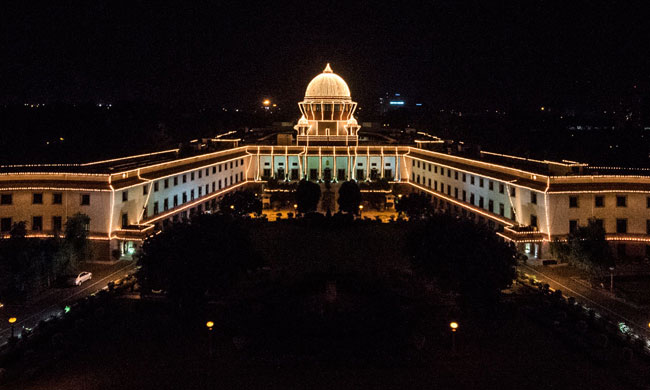 The Supreme Court last week criticized the call for strikes made by Bar Associations of Allahabad and Oudh observing that they are “not supposed to settle their demands by resorting to strikes which may lead to nothing but delaying the justice to litigants”.
…