The Philippines: Kin bewail inaction on murder of Negros lawyer 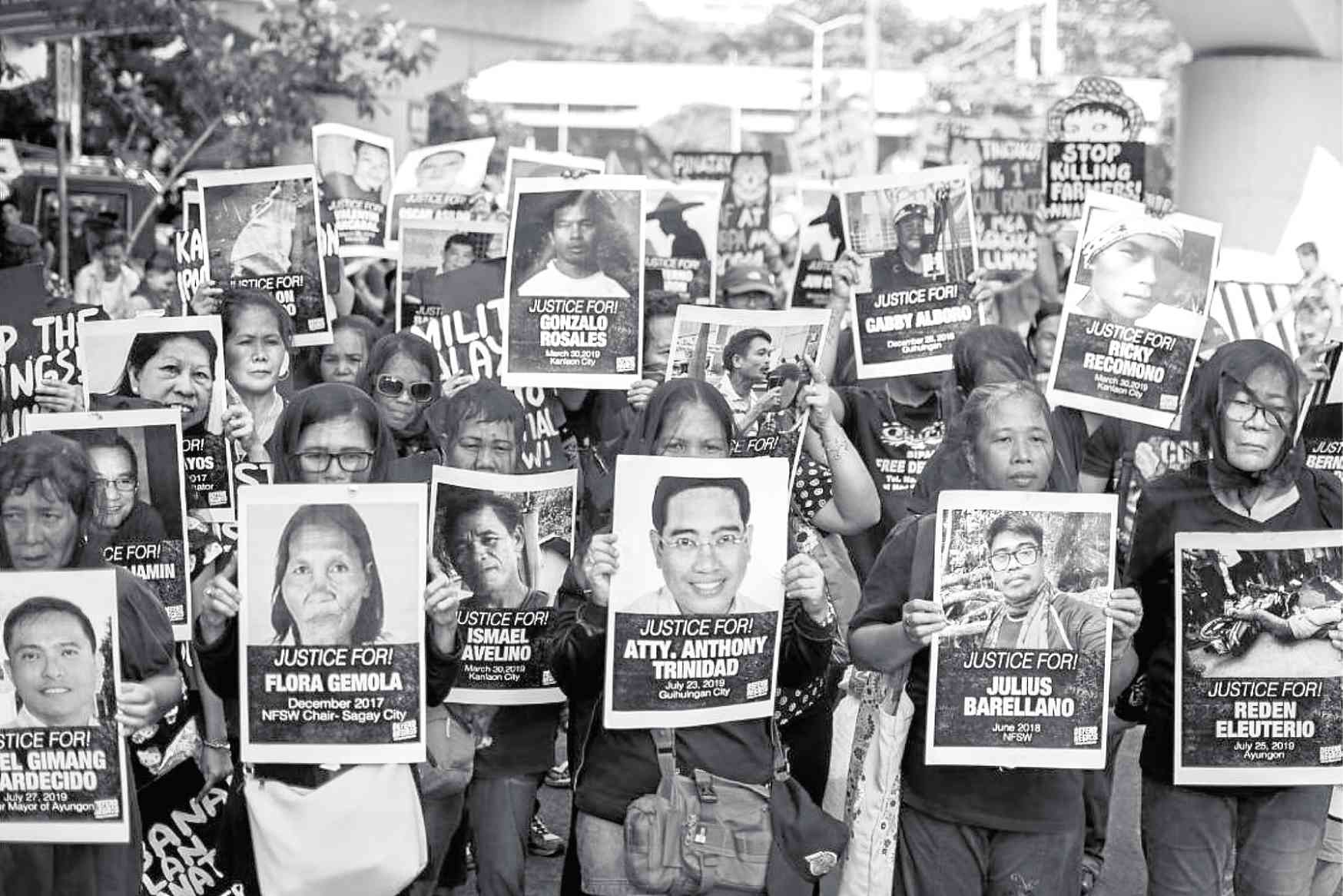 No arrest has been made in the killing of lawyer Anthony Trinidad, a month after he was gunned down in his hometown Guihulngan City in Negros Oriental.

“We have no update at all. No one has called us,” Andrea Trinidad, a younger sister of the slain lawyer, told the Inquirer on Thursday.

Gunmen on a motorcycle shot Anthony dead on July 23 as he was driving a sport utility vehicle in the city center of Guihulngan. His wife, Novie Marie Quirante-Trinidad, who was with him in the vehicle, was wounded.

He was among those named in a list of targets of an anticommunist group for allegedly supporting the New People’s Army (NPA). But the Trinidad family had denied this.

The Defend Negros #Stoptheattacks network said at least 87 people had been killed on Negros Island since 2017.

Letter on murder of Atty. Trinidad

‘Day of Mourning’ for Negros victims

Kin of slain lawyer in Negros Oriental condemns red-tagging: 'Anthony or any member of our family is not a communist sympathizer as portrayed by the people who want to harm and kill us,' says the lawyer's sister Andrea Trinidad pic.twitter.com/droPw6TmZE

POLICE on Friday brutally crushed a wild-cat protest by the Amalgamated Rural Teachers Union of Zimbabwe (ARTUZ) members who wanted to picket at the Ministry of Finance in protest over the poor salaries.

ARTUZ has alternatively been calling on government to review teachers’ salaries in accordance with the interbank rate the central bank introduced in February this year after floating the local currency/bond note at $2.50 against USD$.

Currently the interbank rate against local currency stands at USD$1: $8.7.

At least eight members of the union including human rights lawyer Douglas Coltart were arrested and charged with “public nuisance”. Coltart was assaulted with rubber truncheons before he was handcuffed in the process.

“I Was In My Underwear When They Abducted Me,”

Zimbabwe human rights activist and lawyer @DougColtart has been assaulted and arrested by Zim police. The police arrested him for recording them while they harassing citizens. He is in detention. #FreeDougColtart pic.twitter.com/p6QaibJeJN

Please spread widely. Prominent lawyer and human rights defender @DougColtart has been arrested for simply being a responsible friend. Calling to #FreeDougColtart and his friends immediately! Retweeting and calling attention to this does help. #Zimbabwe https://t.co/7NB3cY8iBq

We are now at Harare Central police station. @ZLHRLawyers have deployed lawyers to represent us. However one of those arrested Godfrey Chanda (@ARTUZ_teachers Secretary for Midlands) has been taken away from the rest of the group and his whereabouts are unknown. #PayDayFuneral pic.twitter.com/xjrC6YpXNg

Grateful for response from the legal profession. All these lawyers (& others who weren’t in the pic) are here at Harare Central attending to our arrest. Also those arrested is a journalist Leopold Munhende who was covering the picket. Why arrest professionals doing our jobs? pic.twitter.com/KNI2ucsmfr

ON 23 August 2019, members of the Zimbabwe Republic Police, arrested ten (10) people who include Amalgamated Rural Teachers Union of Zimbabwe (ARTUZ) members, their lawyer Doug Coltart and a journalist Leopold Munhende outside a government complex in Harare.
The ARTUZ members were arrested as they engaged in a peaceful protest dubbed “PAY FUNERAL”
Those arrested include ARTUZ President Obert Masaraure, Shepherd Tazvivinga, Gerald Tinashe Taruvinga, Tryvine Musokeri, Andrew Mungure, Nation Mudzitirwa, Simon Drury, Godfery Chanda, Doug Coltart and Munhende.
They were apprehended outside the Ministry of Finance Offices in Harare, where they intended to hand over a petition highlighting their grievances as teachers whose salaries have been severely eroded by inflation and the changes in monetary policy resulting in most teachers taking home a salary of less than an equivalent of thirty-eight United States Dollars every month.
Nine (9) of those arrested excluding Munhende (who is a journalist arrested during the course of his work) have since been charged with committing ‘Criminal Nuisance’ as provided in section 46 of the Criminal Law (Codification and Reform) Act and are detained at Harare Central Police Station.
The nine are represented by Blessing Nyamaropa, Tinomuda Shoko and Beatrice Mtetwa of Zimbabwe Lawyers for Human Rights.
Meanwhile, Munhende has since been released.

AFTE's lawyer Mohamed Hafez disappeared from the vicinity of the Alexandria Criminal Court
AFTE holds the Ministry of Interior responsible for revealing his whereaboutshttps://t.co/UZohdVwnDz pic.twitter.com/cV4uICUfLB

Extremely disturbing news as we learn that Egyptian human rights lawyer Mohammed Hafez, who has worked with @afteegypt since 2015, was disappeared while working (he was last seen at Alexandria Criminal Court in Manshiya yesterday). https://t.co/NYQjVCOlBF pic.twitter.com/PWfgFJSBr8

She was forcibly disappeared & detained by authorities just over 190 days ago. pic.twitter.com/ON59Wmb9h7