India/Jammu & Kashmir: Inside locked down Kashmir, a reporter finds fear and chaos

My car moved within a column of Indian army vehicles and a cloud of dust. On a normal day, it would have been a smooth journey from the airport in Srinagar, the summer capital of Jammu and Kashmir state, to my family home in the northern town of Baramulla.

But life is very different in the Kashmir Valley these days. The part that India controls is now under an unprecedented security crackdown to prevent an uprising after the central government in New Delhi unexpectedly stripped the region’s special constitutional status, the last vestige of real autonomy for the predominantly Muslim region that is claimed by both India and Pakistan.

Hundreds of Indian soldiers, armed with automatic rifles, patrol the Srinagar-Baramulla highway, a 35-mile (56-kilometer) -long road that connects the region’s main city with its northern towns. Civilian traffic is sporadic. Shops are shuttered. Army trucks gather speed along the road. And spools of concertina wire block the streets that branch off the highway, forcing residents to remain indoors.

The Indian-controlled part of Kashmir is under lockdown.

Authorities in Baramulla carried out a spree of arrests, including political activists, former protesters and some stone-throwers. But they also arrested intellectuals and lawyers, according to several families I spoke to who described midnight raids. Because of the communication embargo, my calls from Delhi seeking comment from authorities didn’t go through.

Benny Tai, one of the nine leaders jailed for participation in the 2014 pro-democracy Umbrella Movement, has been allowed bail pending an appeal.

Legal scholar Tai was sentenced to 16 months in prison in April over public nuisance charges. He applied for an appeal to overturn his conviction and sentencing.

Mr Justice Andrew Macrae, vice-president of the Court of Appeal, approved the HK$100,000 cash bail application on Thursday. Tai has to surrender his travel document, cannot leave Hong Kong and must live at the address he has given.

Macrae said the appeal will be held between February 24 and 26 next year.

All nine activists have filed appeals to overturn their conviction. Other than Tai, Chan Kin-man, Shiu Ka-chun and Raphael Wong, who were given jail sentences, also appealed over prison terms. Chan was sentenced to 16 months in prison as well.

Occupy leaders Benny Tai thanked the people for writing letters to the prison and words of encouragement. “It’s the best part in every day, and my inmates envied me for the number of letters I got.” pic.twitter.com/KzEjShWPn7

Benny Tai just stepped out of the court. He said he was touched by many selfless HKers who have scarificed themselves to protect HK's core values. He said he believed the golden era of HK is near pic.twitter.com/z0pO9L0YTa

“I am very proud that I can stand with them together in this moment in Hong Kong.”

Benny Tai, 1 of the jailed leader of 2014’s pro-democracy Umbrella Movement, speaks about the #HongKongProtests after being allowed bail pending an appeal #香港 #反送中 pic.twitter.com/WXTdqGYRyv

China human rights lawyer Li Jinxing received a notice from the Shandong Provincial Department of Justice on 22 July 2019 regarding the administrative penalty of revocation of his license due to his posts on social media platform Weibo. His posts were allegedly inappropriate, slandering the Justice Bureau and provoking discontentment against the Party. On 6 August 2019, Li’s hearing took place at the Shandong Lawyers Association. Later in the evening, the decision was passed down that the practice certificate be officially revoked.

Regarding the Chinese government’s administrative measures taken against lawyers in recent years, we request the following:

2.          To revoke administrative measures taken against lawyers that have been issued and improperly interfere with lawyers’ legitimate professional functions;

3.          To guarantee that lawyers will not experience threats and obstruction from the State while carrying out their professional duties, and that their representations on behalf of clients not be used against them for prosecution or administrative penalty; and

4.          To immediately stop all forms of harassment, threats and assaults on human rights lawyers and their law firms.

Spain/Brazil: Brazil authorizes extradition of one of the perpetrators of the 1977 Madrid massacre 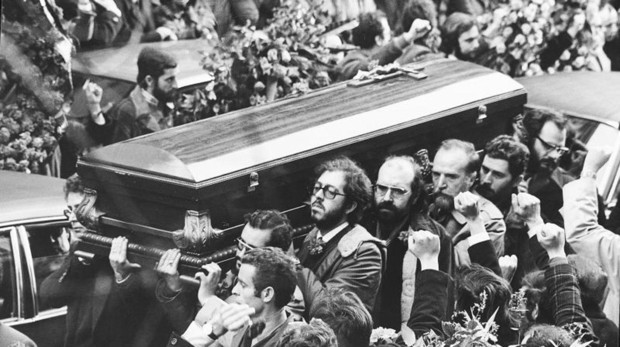 The extradition of the Spanish Carlos García Juliá, convicted of participating in the massacre of left-wing lawyers committed in Madrid in 1977, was authorized by the Brazilian Supreme Court.

The Brazilian authorities thus complied with the Spanish Government’s request for the extradition of the former right-wing militant of the far-right Força Nova party, one of the perpetrators of the massacre in which three labour lawyers, a law student and an administrative officer were shot dead.

García Juliá, who served 14 of the 193 years in prison to which he was sentenced in 1980, was on the run and was arrested on December 2018 in the Brazilian state of Sao Paulo, where he lived under a false Venezuelan identity.

The Spanish court asked the Government to ask the Brazilian authorities to extradite García Juliá, on the understanding that the sentence imposed on him was not prescribed and that he had to serve 3,855 days in prison.

In a public hearing held on Tuesday, the Brazilian Supreme Court (STF) authorized the extradition of Spanish because it considered that the necessary requirements, such as the typification of crimes and the non-configuration of a political crime, were met.

In an opinion sent to the Supreme Court, the Attorney General of the Republic of Brazil, Raquel Dodge, recommended extradition by “not verifying” that the petition filed by the Spanish authorities “was filed with a view to harassing or punishing the extradited by political opinion.”

However, details of the extradition process have not yet been released.

The former Força Nova militant, who was 24 years old when he committed the massacre, was convicted in 1980 of five homicides and four attempted homicides at the law office of the trade union Commissions Operarias, located at 55 Atocha Street in central Madrid.