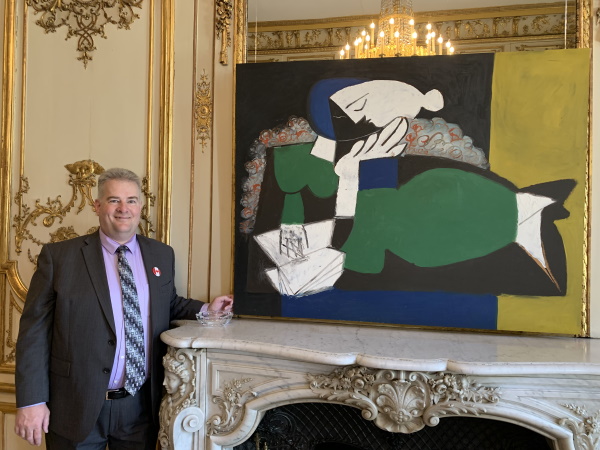 Next week bar association presidents from Canada and the other G7 nations will jointly urge their countries’ political leaders to legally protect lawyers and the confidentiality of the lawyer-client relationship, as well as to ensure that the emerging use of artificial intelligence (AI) and algorithms in legal decision making doesn’t harm human dignity, fundamental rights and access to justice.

Canadian Bar Association president Ray Adlington, and his G7 bar association counterparts, met July 11 and 12 in Paris, where they finalized more than a dozen joint recommendations that the group will present to G7 host, French president Emmanuel Macron, Aug. 23, just before the resolutions are delivered to all the G7 political leaders at their summit in Biarritz, France Aug. 24-25.

Adlington, who has spent his year as CBA president promoting diversity and inclusivity within the legal profession as well as pressuring governments to preserve and boost legal aid, said the bar groups from Canada, France, Germany, Italy, Japan, the United Kingdom and the United States are trying to drive progress in many areas of mutual concern.

“We were focused on everything from equality to the death penalty,” he explained. “Many of [the issues] are common — from the issues around equality leading to populism issues in many of our G7 countries, and I don’t think that we in Canada are immune from that; to issues around the role that artificial intelligence and technologies will play in access to justice; legal aid … is [another] common issue across our countries … ; protection of the environment; strengthening responsible business conduct; [and] preserving the rule of law and the right to a fair trial.”

One of the bar groups’ resolutions asks G7 political leaders to demand, and work for, the immediate release and unconditional formal pardon of internationally renowned Iranian human rights advocate Nasrin Sotoudeh, who was sentenced last March and faces decades in prison and 148 lashes “for carrying out her professional duties as a lawyer and her work to defend fundamental rights, especially women’s rights.”

Under the rubric of preserving the rule of law and the right to a fair trial, the bar leaders are urging the G7 countries to enshrine “protection of lawyers in the performance of their duties.”

Uganda/Rwanda: Uganda’s security came for Rwandans, then for lawyers

On Wednesday, 31 July 2019, armed men picked up Patrick Mugisha, a partner at Mwesige Mugisha & Co. Advocates, from his chambers in Muyenga, a Kampala suburb. Mugisha was reported missing and a victim of abduction. It turned out that for almost a week he had been held without charge at one of ISO’s notorious illegal ungazetted detention centres in Kyengera, another Kampala suburb.

The Uganda Law Society immediately went to battle for its colleague. On 3 August 2019, its president, Mr Simon Peter Kinobe, wrote a strongly-worded letter and appeared on different television channels to denounce ISO, reminding its director-general Col Kaka Bagyenda of the constitutional violation against abductions, and even of the fact ISO has no arresting powers:

“As Uganda Law Society, we cannot continue to look on as a few individuals descend our country into chaos without reprisal. We cannot be observers in the perpetration of impunity with no call to action. We accordingly call upon all lawyers to action, to prosecute both criminally and in civil court the director of ISO Col Frank Kaka Bagyenda for these acts of impunity and, to demand the immediate unconditional release of our advocates illegally arrested and detained by the said ISO. Should ISO fail to comply with our demands to unconditionally release the detained citizens by Wednesday the 7th Day of August 2019, we shall have no choice but to further escalate the matter,” he wrote.

Mr Kinobe accused Col Kaka of “acting with impunity by kidnapping, intimidating, harassing and arresting lawyers without any reason,” Mr Kinobe warned, as he denounced the illegal holding of the lawyer, “beyond the statutory period of 48 hours,” before giving Col Kaka “up to August 7th to release the lawyer or they prosecute him!”

He has no mandate! Law Society president takes on ISO boss over illegal detentions

A 28-year-old lawyer was hacked to death over a land dispute near Murappanad on Sunday.

Police said Velmurugan was murdered over a land dispute with S. Selvam, 28. The latter had invited Velmurugan to his house at Chennelpatti to discuss the problem.

On his invitation, Velmurugan went to his house around 9.30 a.m. and did not come out after the discussion.

During preliminary inquiry, the police found that Selvam had murdered Velmurugan with the help of two of his friends and he fled the house. The police are searching for the accused.