President Museveni, in his expression of condolences, gave assurances that efforts to have the culprits face the law are on-going.

39 year-old Isaac Sendegyeya was shot dead on Sunday morning of 21st July 2019 at the door of his home by unknown assailants as he returned home. President Museveni, in his expression of condolences, gave assurances that efforts to have the culprits face the law are on-going.

“Sorry for your loss. We shall find those criminals and they will face the law,” he said. President Museveni who was briefed on the situation as it was on the ground by family members at the time of murder, advised people to install cameras to help in such circumstances.

Police have arrested some suspects and investigations by security agencies into the murder are progressing. The late Sendegyeya is survived by a widow and two children.

The Philippines: Justice for Anthony, justice for all 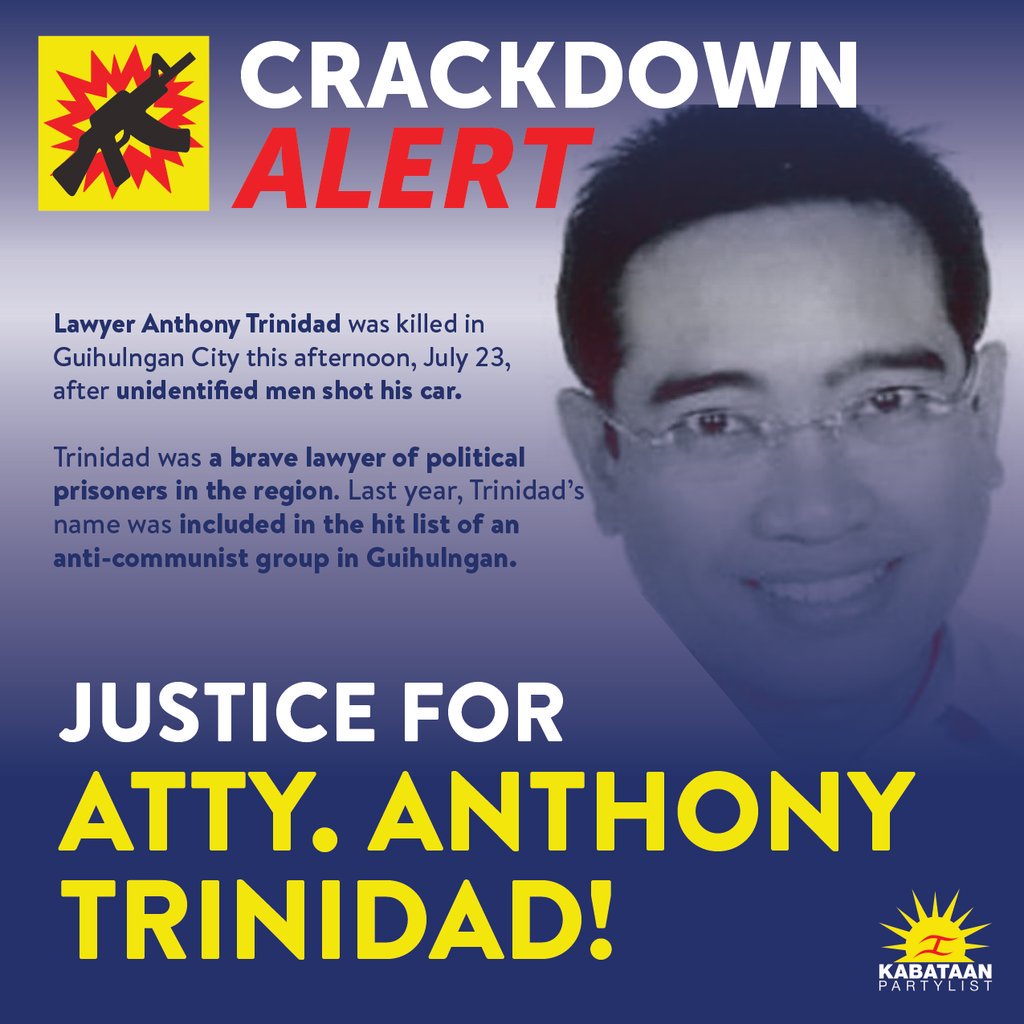 I’ve known Andrea Trinidad for a long time now, since her days as a reporter. We’ve become good friends. We call everyone in our barkada “kapatid.”

Hailing from Negros, she’s soft-spoken, confident, unassuming, and eager to serve. For instance, when she and one of her daughters faced blood-related disorders, she went beyond getting relief for themselves. Andrea helped form and lead a national advocacy group for hemophilia.

Nothing, absolutely nothing, could’ve given Andrea an inkling that she and her family would lose a brother to the unremitting bloodshed in the island they call home.

No one is safe from the Negros killing spree. Not even a respected family of professionals and public servants such as the Trinidads.

Shock and disbelief are written all over the statement of the Trinidad family, which Andrea posted on Facebook.

Duterte calls Karapatan an ‘organization of demons in the Philippines’

Duterte drug war cause for ‘concern’

Democracy Now | Environmentalists risk their lives to save the planet

US Government: “Duterte is clearly behind the Davao Death Squad”

Negros solons alarmed with killings, impunity in the island

MDC vice-chairman Job Sikhala, who was allegedly abducted from Harare Central Police Station after his arrest on charges of subverting a constitutionally-elected government, is now suing the police for acting unlawfully and unconstitutionally.

“We write to you at the instance of our client (Sikhala) hereby providing you with notice of intention to institute legal proceedings against yourself, within
60 days from date of this letter as defined in terms of section 5 of the State Liabilities Act,” Sikhala’s lawyers wrote.

The lawyers said after Prosecutor-General Kumbirai Hodzi had granted his consent to have Sikhala appear before a Harare court, the police abducted him and
locked his lawyers in police cells, thereby blocking them access to him.

Sikhala alleged in his letter that he suffered insults, dehumanising treatment and a sense of shock from the actions of the police while he was blindfolded and
suffering unbearable pain.