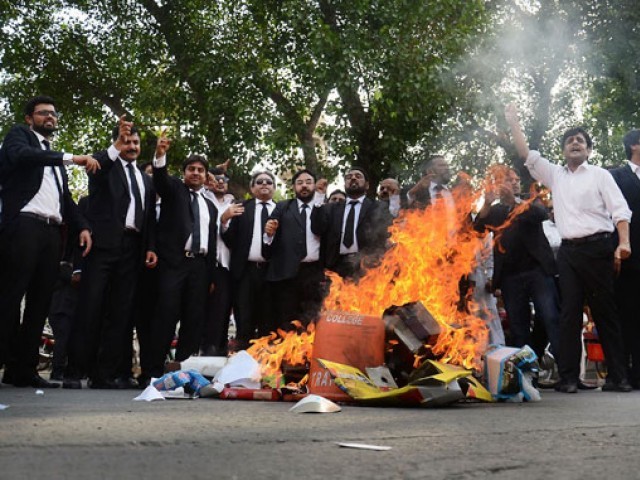 The justice system in lower courts in Rawalpindi has wreaked-havoc as the lawyers continued their strike for the sixth consecutive day.

The strike is being observed due to the non-registration of first information report (FIR) on a civil judge who hit and injured a lawyer with a paperweight during the course of a proceeding.

The lawyers also held rallies in judicial complex, old kutchery and on the roads to protest against the judge.

The litigants faced extreme difficulties as proceedings in 65 courts including sessions, civil and family courts were halted as the lawyers shut down the judicial complex’s main gate at 7.30am. The litigants had to helplessly turn back while the lawyers did not let the prisoners vans’ enter the complex’s boundary.

The High Court Bar has also announced support for the District Bar while the District Bar officials have said that the strike would continue until a case against the related civil judge was registered under the sections mentioned in the application.

Look at an advocate injured by civil judge Rawalpindi shoukat Hussain and if a lawyers are in that position so when and why people of Pakistan get justice from these dummy judges pic.twitter.com/pMR6x3kQJS

DISTRICT COURTS RAWALPINDI
completely lock down. Strike will continue until grevience of Lawyers will not be Redressesd .

In Rawalpindi one Civil Judge Shaukat Hayat attacked and badly injured a lawyer Arsalan Qureshi. The Rwp Kachehri is in complete lock down. Police are not registering FIR against the culprit civil judge. Y no action and coverage? @ImranKhanPTI @SSEHBAI1 @KlasraRauf @HamidMirPAK

#legalinfo
The Punjab Bar Council strongly condemns the unethical, illegal & unwarranted act of Mr Shoukat Hayat Civil Judge Rawalpindi in which a respected Lawyer got injured. The Pb.BC demands strict action against the concerned Judge and registration of a criminal case under