The Philippines: 2 cops arrested as suspects in lawyer’s killing in Rizal town

Security camera footage that followed the tracks of gunmen in the May 17 ambush of a lawyer in Rodriguez town, Rizal province, led investigators to their fellow police officers.

A police source, who declined to be named for lack of authority to discuss the case, said investigators had yet to determine the motive as they, too, were surprised that Cpl. Alberto Umali and Senior Master Sgt. Michael Eralino, both active members of the Rodriguez police force, were involved in the killing of lawyer Edilberto Golla Jr.

Golla, 45, a native of Sultan Kudarat province, was shot dead by gunmen on a motorcycle outside the Eastwood Greenview Subdivision in Rodriguez, where the lawyer lived.

A report from the Criminal Investigation and Detection Group (CIDG) on Sunday said Umali and Eralino were arrested separately on Saturday in a police operation. They were arrested based on a search warrant issued by Judge Cynthia Mariño-Ricablanca of Santa Cruz, Laguna province, for murder and illegal possession of firearms.

Another lawyer shot dead, this time in Rodriguez, Rizal

Filipino Rights Workers Urge International Community to Stand by the Victims Amidst the Charivari, Calumny and Callousness

GENEVA, SWITZERLAND – The resolution tabled by Iceland and supported by many States at the current 41st session of the United Nations Human Rights Council to comprehensively and methodically address the horrendous extrajudicial killings and the plethora of rights violations in the Philippines is a highly significant international initiative.

It is a big step in stride with other parallel measures and contemporaneous efforts that merits the full support of an intergovernmental body that is mandated to ensure the promotion, protection and respect for human rights at the global level. Despite desperate efforts of the Duterte administration to package its violations as worthy of praise and emulation, the evolution of the firm resolution emphasized the futility of attempts to evade accountability on the human rights violations committed by State actors and the international community’s acknowledgement of the grave human rights situation in the Philippines. We likewise appreciate all other current diplomatic initiatives that express concern on the dire situation in the Philippines.

The Philippine NGO delegation met and conversed with several State Missions, some UN Special Procedures and various international human rights organisations to provide direct testimonies and documentation on the killings and attacks against human rights defenders, church workers and lawyers, on the atrocious climate of impunity with the implementation of the Philippine government’s bloody and cruel “drug war” and counterinsurgency program, the use of draconian policies and measures including martial law in Mindanao, and the failure of domestic institutions and mechanisms to provide real succor and effective redress for victims of human rights violations.

The NGO delegation also addressed the misleading theatrics and gross disinformation rants of apologists of the Philippine government in Geneva , which are riding in tandem with the orchestrated propaganda blitz in the country and junket roadshows in the US and Europe. Measured against reality and hard facts, such PR stunts, however, are empty rhetorics and desperate efforts to evade accountability.

We invite the international community of nations and peoples to see through all these charivaris by nervous officials.

Spin #1: The Philippine government refutes the data and reports on the number of victims of extrajudicial killings in the drug war by citing statistics of the Philippine National Police which are “merely” 6,000 deaths.. This is not a numbers game to be wagered over human lives. The numerous cases and consistent reports have indicated that what appears to be a “shoot first, justify later” tendency of the Philippine National Police has resulted to the mad slaughter of poor Filipinos deprived of their right to basic due process. It bespeaks of the cold callousness that has possessed our authorities when a newly-elected senator, who was among the primary implementers of the bloody “drug war,” has derided and trivialised the recent killing of 3-year-old Myca Ulpina, with his “shit happens” comment most insensitive.

Spin #2: The Philippine government misleads the international community in saying that majority of Filipinos approve Duterte’s drug war, citing a 2018 survey and the results of the midterm elections. Lost in translation is another recent survey result released on March 2019, where 78% or 4 out of 5 Filipinos have expressed worry and fear that they would be the next victims of extrajudicial killings. Also brushed aside are the various outstanding questions and complaints concerning fraud, machination and violence during the recent elections and which unfortunately still prey on many of our people.

Spin #3: Filipino diplomats and officials have senselessly berated Iceland and other States supporting the proposed resolution as “colonisers,” once again invoking the country’s sovereignty, in a hypocritical attempt to evade its commitments to international human rights conventions and declarations. Indeed, the “sovereignty” card has been repeatedly misused by the Philippine government to duck accountability, while it has allowed repeated violations on the country’s patrimony and territorial integrity by foreign governments, at the expense of the rights of Filipinos.

Spin #4: Philippine authorities have repeatedly maligned civil society organisations and human rights defenders as “terrorists” and “traitors to their country,” in a vicious attempt to sow misinformation on the facts and issues on the ground and to get back at critics and political dissenters. Contrary to the villification fetish and smear campaign of the Philippine government, Filipino human rights defenders have been killed, arrested on trumped up charges, maligned, threatened and harassed due to their work of exposing the State’s gross violation and abdication of its sworn duty to uphold the rights of its citizens. Aren’t the real traitors those in power who subvert international human rights instruments and the Philippine Constitution to justify their repeated and relentless violation of people’s rights?

Spin #5: Master fake news purveyors of the government have been boasting about a working and vibrant justice system in the Philippines, citing it as among the main reasons why international scrutiny or investigation is not needed. They touted the number of police personnel facing complaints, the conviction of Gen. Jovito Palparan and the revival of the task force on extrajudicial killings as dubious evidence. What is glaring are the following facts: one, that government officials have magnified rare minute cracks on impunity and showcased them but remained mum on the number of police personnel or soldiers convicted for committing extrajudicial killings; two, the conviction of Palparan has been widely attributed to the grim determination of the relatives of the disappeared female students, witnesses, lawyers, human rights defenders and the international community, and not due to the Duterte administration’s efforts; and three, the task force on EJKs created by virtue of Administrative Order No. 35 has turned out to be a government body that has failed in exacting accountability for crimes perpetrated by State actors.

Spin #6: The Philippine government tries to hoodwink the international community when it invokes adherence to international human rights instruments and cites its purported cooperation with UN human rights mechanisms, doing so cynically with tirades of vitriol and verbal insults against UN special procedures, high commissioners and prosecutors of the International Criminal Court and its repeated rejection of any international investigation or inquiry on reported human rights violations. The government has also barely responded substantially to most, if not all communications by special procedures and has made a mockery of the UN Universal Periodic Review process by abusing it as a platform to deodorise its deceptive claims on respecting human rights.

We know it will get worse before it gets better. And we are bracing for panicky reprisals. But we will stand our ground and will continue to stand in the way to stop the impunity. We ask the international community of nations and peoples: stand by us before it is way too late as it is already much too much. #

(Thru WhatsApp or Viber)

Pakistan/Day of the Endangered Lawyer: Lawyers Block Police Entry Into Courts In Protest 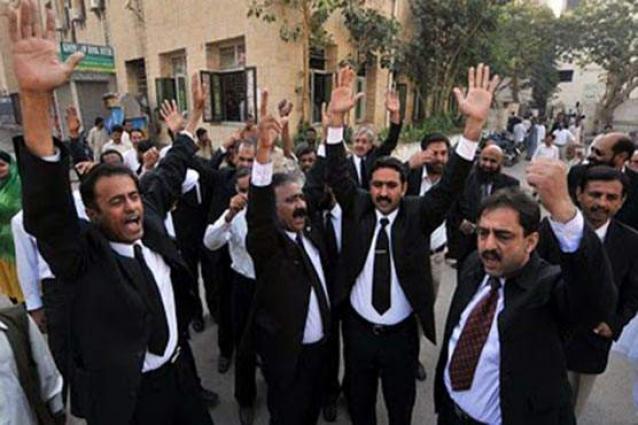 Local lawyers Saturday observed strike against Daska police and stopped the entry of policemen in the Daska bar premises by locking the main gates here.

The protesting lawyers did not allow the police vans carrying prisoners from Sialkot district jail to enter the Daska Judicial Complex. They also staged a sit-in at the lawns of the Complex and chanted slogans against the police.