India: Supreme Court lawyer killed in Noida, second lawyer to be killed in Uttar Pradesh in one month

A Supreme Court lawyer, identified as Kuldeep Kaur, was found murdered in Noida on Tuesday night. Kaur, according to news agency ANI, was married to a retired army Captain Navjot Singh.

Her body was found from her residence in Sector 31 of Noida.

The Supreme Court Bar Association has written to Uttar Pradesh Chief Minister Yogi Adityanath demanding appropriate steps to protect the lives and properties of lawyers in the state. “It is less than a month since Ms. Darvesh Yadav, First Woman Chairman, Bar Council of Uttar Pradesh was murdered in the Bar Association of Agra. It is high time that the state of UP should take serious and drastic measures to control the deteriorating law and order situation,” Livelaw website quoted the statement from the SCBA.

Supreme Court lawyer killed in Noida, second lawyer to be killed in Uttar Pradesh in one month

From Western to Coastal Odisha, the entire judicial system has virtually been brought to its knees by agitations by lawyers over various issues in the State.

This has led to massive resentment among people as they are being deprived of judicial services and justice. It is pertinent to mention here that the lawyers in western Odisha are on a cease-work agitation demanding a permanent High Court Bench in the region.

In Orissa High Court, lawyers continue to boycott the courts of Collegium-member judges protesting the recommendation of names of lawyers who are not regular practitioners in the High Court for appointment as judges.

“As the name of a lawyer, who is not a practitioner in Orissa High Court, has been recommended for appointment as judge, we are boycotting courts of collegium-member judges,” said Gopal Krushna Mohanty, President of the High Court Bar Association.

Similarly, the lawyers in Bhubaneswar are also continuing their agitation protesting assault on one of their members. 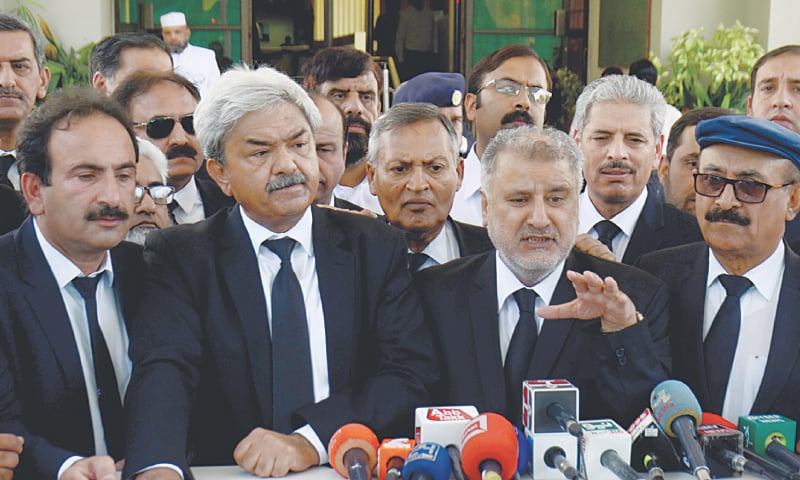 As the Supreme Judicial Council (SJC) held a brief hearing on the references against two superior court judges here on Tuesday, lawyers described Justice Qazi Faez Isa as the Nelson Mandela of the judiciary for his struggle for the rights of Balochistan.

“Therefore, the judiciary should exercise extreme caution while dealing with the judge lest it should commit discrimination,” warned Supreme Court Bar Association (SCBA) president Amanullah Kanrani.

The SJC met for a brief period — between 10 and 15 minutes. Attorney General Anwar Mansoor did not appear before the council, unlike the first hearing, as he was not on notice. It is believed that the two judges also did not appear, though they furnished their replies rebutting the allegations levelled against them in the presidential references.

Meanwhile, the lawyers, except a part of the legal fraternity, observed on Tuesday a strike across the country on the call of the PBC to protest the filing of references against the two superior court judges.

The legal proceedings came to a grinding halt in Karachi and other parts of the country as the lawyers stayed away from courts. The courts wore almost a deserted look. The lawyers did not turn up to plead their cases fixed in the courts for the day, leading to adjournment of a large number of the cases.