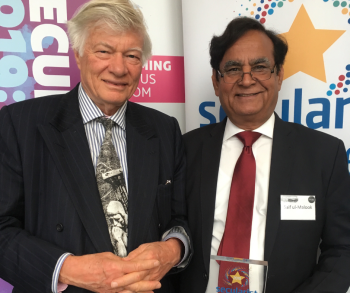 A lawyer who defended a Christian woman who spent eight years on death row for blasphemy in Pakistan has been named as the Secularist of the Year for 2019.

Saif ul Malook, who defended Asia Bibi, was awarded the National Secular Society’s annual prize at its Secularism 2019 conference on Saturday 18 May.

Asia Bibi was sentenced to death by hanging for allegedly insulting the Islamic prophet Muhammad in November 2010. Pakistan’s Supreme Court ordered her to be freed in October 2018. It upheld her acquittal in the face of a petition urging its quashing in January.

Malook represented Asia Bibi from 2014 until the end of the process. He has faced death threats from Islamists in response, as have the judges who ordered her to be freed.

He is now handling another blasphemy case involving Shaghufta Kausar, who faces a possible death sentence in Pakistan over a text message that allegedly insulted Muhammad.

“Thanks to the National Secular Society for recognising my efforts to secure the acquittal of Asia Bibi.

“To fight blasphemy cases in Pakistan is putting one’s own and families’ lives at risk. The moral support from organisations such as the NSS has given me the courage to take the case of Shaghufta Kausar – another Christian woman on death row on blasphemy charges.

“I assure you that I plan to continue my mission in providing legal aid to all blasphemy victims even in future regardless to the threat to my life.”

So pleased you see Saif Ul Malook pick up Secularist Of The Year. He is the courageous lawyer for Asia Bibi (and thoroughly nice man) #Secularism2019 pic.twitter.com/N6ES7bZ35f

The winner of the Secularist of the Year is Saif ul Malook, the lawyer who defended Asia Bibi, a Pakistani Christian woman who was sentenced to death and spent nearly a decade in prison until being freed last year. @NatSecSoc
#Secularism2019. pic.twitter.com/d2Z4VO1n04

The winner of the Secularist of the Year is Saif ul Malook, the lawyer who defended Asia Bibi, a Pakistani Christian woman who was sentenced to death and spent nearly a decade in prison until being freed last year. #Secularism2019 pic.twitter.com/Ft0GlLKKx6

I am in awe of how brave Asia's lawyer, Saif ul Malook is. Most courageous man in Pakistan right now.

#AsiaBibi's Lawyer Saif-Ul-Malook will fight the case of a Pakistani Christian Couple on death row since 2014 https://t.co/MaBJ2nibs1 .