Something strange is happening in Xi Jinping’s China. This is supposed to be the perfect dictatorship, the most sustained period of authoritarianism since the Cultural Revolution ended more than forty years ago, a period of such damning disappointment that all but the regime’s most acquiescent apologists have become cynics or critics. And yet the past few months have also seen something potentially more interesting: the most serious critique of the system in more than a decade, led by people inside China who are choosing to speak out now, during the most sensitive season of the most sensitive year in decades.

The movement started quietly enough, with several brilliant essays written by a Chinese academic that drew an attack from his university bosses, which in turn stirred a backlash among Chinese public intellectuals. None of this means that the Communist Party is getting ready to loosen its icy grip over the country, but it is a remarkable series of events that is challenging what was supposed to be possible in Xi’s China.

Although the party never ruled over a golden age of free speech in China, it was possible to argue that for a decade up until the late 2000s China was getting freer. The combination of economic reforms and proliferating new media appeared to be permitting citizens more personal autonomy and freedom of expression. That began to change slowly soon after Beijing hosted the 2008 Olympics. First came the detention of Liu Xiaobo for helping to organize “Charter 08,” a document calling for modest constitutional reforms—a stand later recognized by the award of a Nobel Peace Prize. Then the overthrow of autocracies during the Arab Spring in 2011 fed into party neuroses about secret plots and uprisings, and this last decade has seen the end of meaningful public debate of almost any kind.

Enter Xu Zhangrun. A fifty-six-year-old professor of constitutional law at Beijing’s prestigious Tsinghua University, Xu is well known in Beijing as a moderate and prolific critic of the government’s increasing embrace of authoritarianism. Since 2012, he has published and spoken widely about his concern over China’s course. Some of his essays are mentioned in “China’s Moment,” translated by David Ownby, a University of Montreal history professor who, with several other scholars, started an invaluable website called “Reading the China Dream,” which makes available leading Chinese thinkers in English. Others are translated by the scholar Geremie Barmé and collected on this page of the China Heritage website.

Xu followed this up with several other articles warning about silence and complicity, as well as an extensive five-part critique of the party since reforms began in 1978. Although all of Xu’s articles were immediately censored, Xu himself initially escaped official criticism—until this year, when in March he was suspended from teaching and placed under investigation.

That led to a series of courageous essays from Chinese public thinkers. One leading voice was Guo Yuhua, a colleague of Professor Xu’s at Tsinghua who has herself been sidelined by the university while her critique of the government has been censored and suppressed. (See the NYR Daily’s 2018 Q&A with her here.) Guo wrote that the university was destroying its reputation by attacking Xu.

Other scholars or prominent voices who joined in include the independent writer Zhang Yi, the film critic and publisher Geng Xiaonan, the translator and scholar Zi Zhongyuan, the law professor Xia Li’an, and the Peking University economics professor Zhang Weiying (who revised a folk ballad to support Xu; it can be heard here). Many others have followed, including some writing sarcastically of the need to get rid of all professors, and some using classical poetry to voice their support. In addition, Chinese and foreign scholars launched a petition to support Xu, which can be viewed, and signed, here.

Today is #GaoZhisheng’s birthday. He is a former prisoner of conscience & human rights lawyer from China who is once again the subject of enforced disappearance. Missing since 13 August 2017 @amnestyusa fears Gao is at high risk of torture or even death. He must be released now! pic.twitter.com/RuizplZ1TZ

Several high-profile lawyers in Greece have recently been arrested and detained. Colleagues criticize this as arbitrary “procedural extremism” by the judiciary, and there has been a failure of the Athens Bar Association to effectively respond to these attacks.  The Minister of Justice has engaged in extensive wiretapping and surveillance of lawyer-client communications, reported assassination or death contracts and reprisals against lawyers for taking on sensitive cases, leakage of files and lawyers’ communications to the press, all of which put lawyers in acute danger. Recently, the Council of Europe Commissioner for Human Rights published a report about the situation of human rights defenders that mentioned Greece among the CoE’s countries (Azerbaijan, Russia, Poland) where defenders are most harmed.

The lawyers involved are:

Alexandros Lykourezos, 85 years old, is probably the most famous Greek lawyer, his law office is one of the oldest and goes back more than 120 years.  The prosecutor, instead of calling him to apologize, issued an arrest warrant as if he was a fugitive, and he had to spend the night in the police cell of the anti-terrorist unit. He is still held on the 12th floor of the General Athens Police Directorate. His lawyer says that issuing an arrest warrant against an 85 year old respected lawyer is not only illegal and breaching the presumption of innocence, but is “not sober”. Other high profile lawyers characterized it as “a crime against justice”  http://lykourezoslawoffices.gr/?fbclid=IwAR0mUDsZNqBkt1dmdORp_U6TeolkHQW08CSTby_HmOjjWRu9d_uWiHy45yM

Theodoros Panagopoulos.  https://www.xo.gr/profile/profile-906174371/el/?fbclid=IwAR0IVipMcQ30GowdIbScdy4Dw8AlrxbREi06XoU7J4BWXErzdjqpmIwSmQA
Georgios Antonopoulos also teaches civil law in the Law School of University of Athens, and he has been on remand now for three weeks. http://www.lawgreece.gr/?page=article_list&cat=1&fbclid=IwAR07rM0tTPiTV1KYhzhNaaEMJaER8yfBHRA0RXAm046GH6-Q0CZ6jh9oqsE
A woman lawyer, Chryssa Kioumourtzi,  was also placed in remand for having “close contact” with a prisoner. Intercepted communications showed that they had been flirting, and communications were leaked to the press by the authorities.  The media went into her Facebook account and retrieved private pictures. She allegedly informed the prisoner about the “spaces” in the Court of Appeals, and this was considered as participation in a criminal organization. He is reportedly in a very bad psychological condition. http://www.ereportaz.gr/ayti-einai-i-ksanthia-dikigoros-poy-profylakistike/?fbclid=IwAR38kZYF1urR_myAj2Fvi_K_0pmjbU0y7aQPPgplOIagrnCcojyARHPxV0Q
All these lawyers were arrested by the anti-terrorist police following the issuance of arrest warrants although they are highly respectable, with well-established offices and addresses.
https://www.newsbomb.gr/en/story/975062/two-prominent-laywers-arrested-for-alleged-involvement-in-korydallos-prison-mafia?fbclid=IwAR3tAis52Rkl-aTTE-CwWAw39XGqi9zHJaO22rLLIlTdEzFdZZhAcIzDcYc
https://www.naftemporiki.gr/story/1466749/top-greek-defense-attorney-arrested-over-alleged-involvement-in-prison-run-crime-ring?fbclid=IwAR1iBu8DTBzt5JuT_TCaYX1FXhCYpPuknLq3kp1xjXWFtg2ZQMbbrhALCgs
https://thetimes.gr/prominent-greek-lawyers-arrested-in-prison-mafia-scandal/?fbclid=IwAR0DzV4AP19ABJIYZyxSX22Dv2_CvXrXiaxiYJubHYzM98z7MoOPsBQll6g
https://greece.greekreporter.com/2019/04/19/prominent-greek-lawyers-arrested-in-prison-mafia-scandal/
http://www.ekathimerini.com/239689/article/ekathimerini/news/high-profile-lawyer-arrested-over-prison-mafia-probe
http://www.ekathimerini.com/239705/article/ekathimerini/news/top-lawyer-arrested-over-prison-gang?fbclid=IwAR3uujZOwBV-LzKE-cMzxTLdy6C5arZfrlCYPew9MXl7DnVwEnbLXVas4NA
http://en.protothema.gr/lawyer-alexandros-lykourezos-arrested-for-alleged-connection-to-the-prison-mafia/
https://www.sbs.com.au/yourlanguage/greek/en/audiotrack/greek-lawyer-accused-ties-prison-mafia
https://www.thenationalherald.com/180208/greek-police-arrest-albanian-criminal-lawyers-murder/?fbclid=IwAR2OTCjk68pka1mk0TKCjZ_0HmCLIB_BKsPZ9B3szysXP95Ld1lG9Bs0bJw
http://www.ekathimerini.com/239750/article/ekathimerini/news/lawyers-tied-to-prison-gang-gain-time-for-defense
https://dyyad.blogspot.com/2019/04/crackdown-of-lawyers-in-greece-dyyads.html?fbclid=IwAR2wREEORdTEk-u4d87RiWI08Ne4MRYcL1qsDF8m9GkRjB9yR0gcZc9r3ec
https://www.news247.gr/koinonia/ti-megali-deytera-tha-apologithoyn-lykoyrezos-panagopoylos.6714776.html?fbclid=IwAR0JJcxEprYp6tjlMpuT1DlgPzQAqpTbGmZEO8G5VjpzCZyDwUXItzyFhk0 (GREEK)
https://dyyad.blogspot.com/2019/04/blog-post_20.html?fbclid=IwAR2SCzLnMrrqJyEYfRQ3vP0D7j8ABy3BAkZA8cIILdip_rlgJMcvAFl94DM (GREEK)
https://www.protothema.gr/greece/article/884059/dimitrakopoulos-gia-sullipseis-lukourezou-panagopoulou-prokeitai-gia-dikastiki-akrotita/?fbclid=IwAR2Zx7aL3Be1VZrxnqjzsO6pa4Yle1HxTBwDpB-ZuZPJxl-aW0dphjxnygU (GREEK)
https://www.documentonews.gr/article/oi-synomilies-poy-kaine-ton-lykoyrezo?fbclid=IwAR26cClzml7qNzrnGZjENmQu8OYR7wgkBYm8Zl6W8iskvaQ-2bj6DIa6ulI (GREEK)
https://www.protothema.gr/greece/article/884170/o-lukourezos-kanei-agogi-stin-papakosta/?fbclid=IwAR1IQqcsqCJVbstJC9dri1PskIiq1IF8rPwzSLoj_iRPz1VFW_IHC579FPU (GREEK)

This week I am attending the 64 session of the African Commission on Human and Peoples’ Rights (#ACHPR64). A great number of defenders were unable to join us because they weren’t allowed to travel, could not obtain a visa from the Egyptian authorities or decided not to come for fear of reprisals. We have received more than 60 alleged cases of thiskind! This is not right!!! Human rights defenders should be able to participate in public life and to travel and participate in international meetings with international and regional organisations. These are rights enshrined in the UN Declaration on Human Rights Defenders. 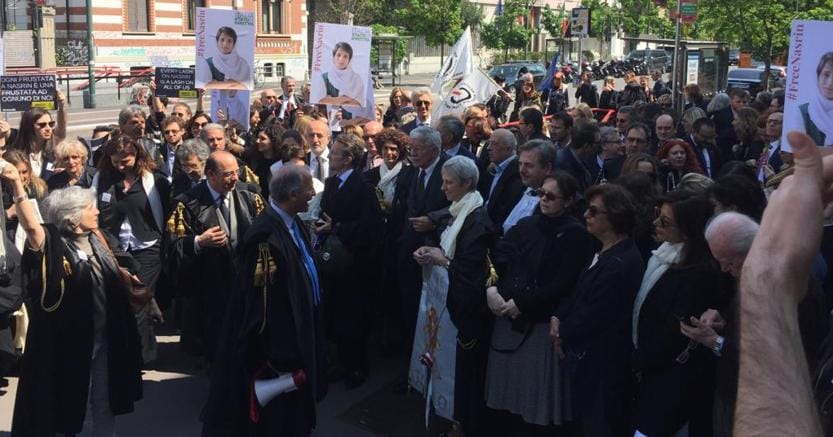 Take urgent action to demand justice for Nasrin Sotoudeh. Nasrin is a prominent Iranian human rights lawyer who was sentenced to 38 years in prison and 148 lashes for defending women's rights.