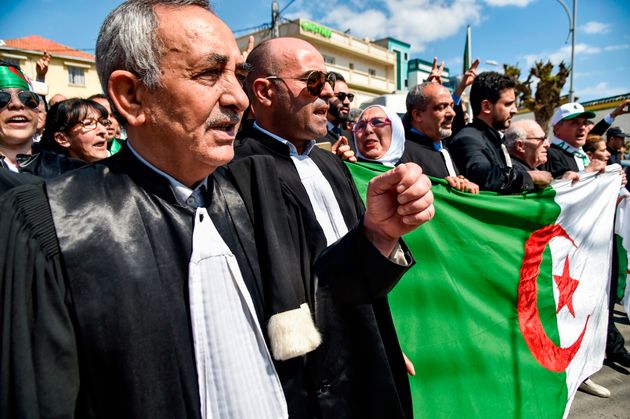 After judges and lawyers, notaries and bailiffs demonstrate before the Ministry of Justice to #Alger according to @TSAlgerie#Algerie (Photo: TSA) https://t.co/pdsCNOeJEf

Direct:🇩🇿 Algeria Algérie 15 April: Sétif: In support of the popular mobility: The lawyers organization of the state of Setif announced its boycott of the judicial work 40 days from April 17, and organizing protests before the judicial councils. https://t.co/5diQTU2gxc

China: ‘We Know That She is in Very Poor Health’

Authorities in the northeastern Chinese province of Liaoning have postponed the trial of a detained human rights lawyer, who is suffering from multiple health problems after more than 18 months of pretrial detention.

Li Yuhan was scheduled to stand trial on charges of “picking quarrels and stirring up trouble” on April 9, according to her brother Li Wensheng, who was only notified by the judge after making the trip from his home in the eastern province of Jiangsu to attend the trial.

Li told RFA he had tried to arrange a meeting with the judge after his arrival, but that the judge hadn’t taken his calls.

“As for the specific reason, the judge said it was because the lawyer had requested that witnesses be allowed to appear in court,” Li said.

“But when I asked the lawyer, he said that this request was made last year, that they were maybe just using this as an excuse [to delay the case],” he said.

“I will try contact the judge again, but I have been unable to contact him so far; he just says he’s in a meeting.”

Li Yuhan has been visited by her defense attorney in the Shenyang No. 1 Detention Center, and found to be in poor health. She has been hospitalized twice and given a number of medications, Li said.

Her lawyer has applied for her release on medical grounds.

The victim was shot dead at a bar in Ozuoba Community, Obio/Akpor Local Government Area of Rivers State, around 10am, Friday.

The victim was quickly identified as a lawyer because he had gone to the waiting point dressed in his full barrister regalia.

A source who claimed to have witnessed the incident, but pleaded anonymity, said the unknown gunmen trailed the lawyer to the drinking joint where he was waiting for an undisclosed person before the gunmen arrived the scene.

It was gathered that the gunmen killed the victim and made away with his telephone sets.

However, personnel from Ozuoba Divisional Police, had later arrived the scene and picked the remains of the victim to a mortuary.

The former head of the human rights group Karapatan in Southern Mindanao criticized the Armed Forces of the Philippines for linking the group to the Communist Party of the Philippines-New People’s Army (CPP-NPA).

Honey Mae Suazo, the former secretary-general of Karapatan Southern Mindanao, said in an emailed statement that AFP Deputy Chief of Staff for Civil Military Operations Maj. Gen. Antonio Parlade Jr. was “spinning their dirty old tactics to discredit the human rights advocacy and legal services of Karapatan to the marginalized.”

“They have gone so low, even adding personal attacks against me by dragging my husband, whom I am separated from, into their allegations,” she said.

On Friday, the AFP linked Karapatan’s Suazo to the communist group when they presented a receipt for the bail of alleged NPA commander named Zaldy Cañete, alias Jinggoy, in 2015, which was paid by Suazo.

But Suazo said it was part of her work to provide legal services as paralegal worker to represent Cañete’s family.

“I had to act as representative for the family, given the situation at that time. Cañete’s father was murdered, while his mother and sibling were gravely under threat. We had worked through this legal process and most of the cases were dismissed due to lack of merit and others were bailable. The family raised the funds for the recommended bail,” Suazo said.

The vicious red-baiting must stop. Gen. Parlade must put up or shut up.

The NATIONAL UNION OF PEOPLES’ LAWYERS (NUPL) will ask the Supreme Court to protect its officers and members from reckless labelling harassment, threats and violence through the Writs of Amparo and Habeas Data against Parlade and his superiors, including Atty. Rodrigo Duterte.

This is the opening salvo in a string of legal suits against Gen. Parlade’s wild red-tagging.

Representatives from the marginalized sectors, who are clients of NUPL, will join them and stage a protest action in calling for the military and the Duterte administration to take their hands off their people’s lawyers.

NUP lawyers, law students and their allied lawyers in the profession will appear in the street in their court attire.

STOP THE ATTACKS ON LAWYERS!
LAWYERS ARE NOT TERRORISTS!

ATM: Members and officers of the NUPL troop to the Supreme Court to ask for protection from relentless military red-tagging led by Brig. Gen. Antonio Parlade Jr.

NUPL files petition for issuance of writ of amparo and writ of habeas data with SC seeking protection against alleged violations and threats of violations by state security forces against their members. | via @mikenavallo pic.twitter.com/T2mTijOz4G

The Philippines: CA junks arrest warrant in Cavite case vs. lawyer who sued Duterte before ICC

The Court of Appeals (CA) has junked the arrest warrant issued against Jude Sabio, the lawyer who filed a communication with the International Criminal Court (ICC) against President Rodrigo Duterte’s war on drugs.

In a 15-page decision dated March 29, a copy of which ABS-CBN News obtained Saturday, the CA 9th Division ruled that there was no basis for a Trece Martires City, Cavite judge to order Sabio’s arrest over his non-compliance with the Mandatory Continuing Legal Education (MCLE) program for lawyers.

All Philippine lawyers are required to take MCLE classes every 3 years.

CA Associate Justice Emily Aliño-Geluz, as then Trece Martires City Regional Trial Court Branch 23 Judge, had issued an arrest warrant against Sabio on March 7, 2018 after Sabio failed to pay the P2,000 fine which the judge imposed as his MCLE compliance certificate had expired.

Sabio asked the judge to reconsider her order but she ignored the motion and instead issued another warrant of arrest in place of the previous unserved one in April 2018.

The President appointed her as CA associate justice on April 30, 2018 shortly after she issued the arrest warrants against Sabio.

In its ruling, the appellate court said Geluz gravely abused her discretion when she imposed the penalty of a fine with imprisonment and later on issued the warrants of arrest against Sabio.

Malacañang has denied the claim of lawyer Jude Sabio who filed a communication case before the International Criminal Court against President Rodrigo Duterte that he was being harassed. https://t.co/CDBB86q2ll

Kudos to the Court of Appeals for upholding the law, not allowing it to be weaponized for persecuting Jude Sabio! https://t.co/VD1aKUQ42G The Iranian government and judiciary are intensifying a nationwide crackdown on civil society and beyond, as well as most forms of activism, to stifle any form of dissent, Abdolkarim Lahiji, a prominent Iranian human rights attorney now based in France, told the Center for Human Rights in Iran (CHRI).

In a wide-ranging interview conducted by phone on April 5, 2019, Lahiji, who defended political prisoners in Iran before and after the country’s 1979 revolution told CHRI: “Today, it’s not just political opponents and defenders of human rights being imprisoned, but conservationists, hungry people and Sufi Muslims, too. The scope of the crackdown has expanded. When social and economic conditions deteriorate, the Islamic Republic believes it can only protect its cohesion by cracking down on people and if it loosens its grip, protests could spread into an uncontrollable situation.”

CHRI: In recent years, Iran’s judiciary has been leveling various charges against prisoners of conscience based on activities that are not crimes under the law. How did we get here?

Abdolkarim Lahiji: First we have to keep in mind that we are dealing with an ideological and theocratic judicial system. Iran’s judiciary has two traits that we have witnessed since the first week after the 1979 revolution. The first trait is that it’s arbitrary.

What they have done to Abdolfattah Soltani, Narges Mohammadi and Nasrin Sotoudeh are clear examples. They want to intimidate everyone, especially after the mass demonstrations that have taken place in the past two years, with people protesting against unpaid wages, high prices and poverty. They punish prisoners of conscience and political prisoners so that others would be scared to talk to foreign media and share their frustrations with the world.

148 lashes on her body and nearly 4 decades in prison. This is the awful punishment #NasrinSotoudeh will face for peacefully advocating for women’s rights in Iran. But our voices can help #FreeNasrin and others like her: sign the petition! https://t.co/0XKJSskdpX

Below we are reproducing the Open Letter to Tsinghua University written in support of Professor Xu Zhangrun 許章潤. A list of all of those who have contacted us over the last week (5-12 April) to sign this petition is appended below. We are collecting signatures until Friday the 19th of April (19 April in the Americas and Europe, 20 April in Asia and Australasia).

If you haven’t already done so, we would again request that you contact colleagues and others who are concerned about the state of academic life and free speech in the People’s Republic of China. Please provide them with the following details:

To sign this letter, please email your name and affiliation to:

Belgium: Belgian Advocates To Sue Government Due To Underfunding – Head Of Bar Association 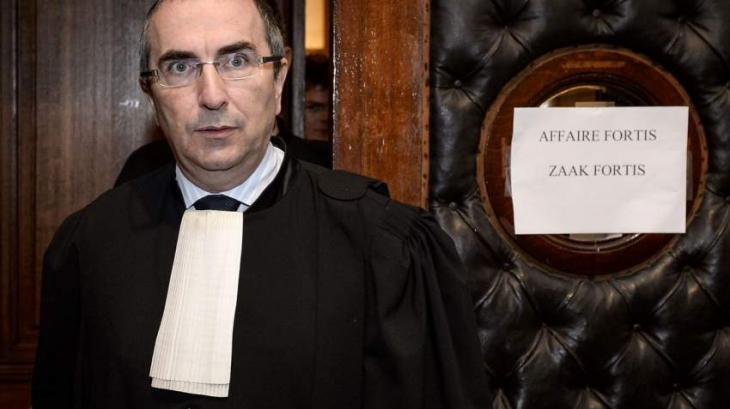 Avocats.be association that unites French- and German-speaking chambers of advocates in Belgium will lodge a judicial complaint against the country’s government over underfunding the state bar in May, the association’s President Jean-Pierre Buyle said on Friday.

“We have two complaints. First, the lack of respect for the independence of the judiciary caused by the lack of resources allocated [the staff list is not full]. Second, the violation of the citizens’ effective recourse, including the inability to deliver justice within a reasonable time,” Buyle said as quoted by Le Soir newspaper.

The complaint will be filed with a French court in Brussels in May.

Belgian Minister of Justice Koen Geens said in March that the kingdom needed 740 million Euros($836 million) to improve the situation with the financing of justice institutions.

In March, Belgian judges and state lawyers already went on strike expressing dissatisfaction with the lack of workers and underfunding of the judiciary, as well as against the infrastructural problems that it faces. The strike came within the campaign named “66 days to save justice”, initiated by Avocats.be and other juridical associations and trade unions. In advance of the upcoming Belgian Federal election scheduled for May 26, the campaign is aimed to draw attention of citizens and politicians to the main demands of the judicial community such as adequate funding of state bar and providing effective access to justice for all citizens.