International delegation of lawyers to present their initial findings on attacks on lawyers in the Philippines @gmanews pic.twitter.com/Ny17WChyUN

A delegation of foreign lawyers has asked President Rodrigo Duterte to protect, and refrain from “publicly attacking,” lawyers, after it found a “sharp increase” in human rights violations against legal professionals during the current administration.

The President should instead publicly condemn attacks, the nine-member delegation said after conducting a brief study of 13 violent incidents against lawyers in the last two years.

The mission learned there was “no structural protection, compensation or remedy for the victims and their families,” as well as a “lack of effective oversight of executive bodies  and law enforcement agencies, supporting a culture of impunity.”

As part of their study, the delegation, whose members come from Belgium, Italy, Japan, South Korea, the Netherlands, and the United States, also interviewed officers from the Department of Justice and the National Bureau of Investigation, which they said recognized the problem but seemed “frustrated” about local investigations.

At least 37 lawyers have been killed in the line of duty since the Duterte administration began, according to the count of the National Union of People’s Lawyers, one of the local groups that hosted the international mission.

Knowing How it Feels:

It was so for real. And it stared at us right in our faces.

The International Delegation. of Lawyers which just concluded a Colloquium and issued a critical Initial Findings on the query into the attacks on Filipino judges, prosecutors, lawyers and paralegals was itself the subject of brazen threats, harassment, and surveillance yesterday.

At the press conference at the Integrated Bar of the Philippines (IBP), a man in civilian clothes who identified himself as a military personnel approached an IBP staff and boasted that “these foreigners are now under surveillance.” Afterwards, he milled around the Delegation and was not-so-discreetly taking our pictures and snooping on our conversation. Meanwhile, a woman in sloppy civilian clothes was also close by and was looking ill at ease, reporting at the top of her voice to somebody over the phone. When asked by our hosts to identify herself, she claimed to be a media person but could not produce any form of identification at all.

Thereafter, the Delegation was closely tailed from the IBP to a mall where we took lunch
by two men in bullcaps riding in tandem on a motorcycle with no plate number. We were tailed until we reached our hotel where more men in civilian clothes and bullcaps were posted at both entrances, obviously stalking us and peering into the lobby and monitoring the ingress and egress of people and vehicles.

When one of the men visibly posted close to the entrance was confronted by the hotel security, he claimed he was waiting for his relative to check in though he was just standing outside pounding incessantly on his mobile phone for several hours already. We learned that he actually left for the night.

Also, a member of our host committee was also tailed presumably by the same group of people when she left the hotel.

Earlier today, a heavily tinted car parked at the basement of the hotel tailed the vehicle of our Delegation even while motorcycle-riding men were idly posted at the hotel’s street corner.

We were made to understand that our Delegation was probably the first foreign group to enter the country and conduct a firsthand open inquiry on the reported rights violations under the present Philippine government.

Under the contemporaneous circumstances and in the context of the usual reaction of the Duterte government towards opinions inconsistent with its official line, these vexatious acts against our Delegation appear to have the fingerprints of intimidation and reprisal by State agents.

It is indeed ironic that our lawyers’ delegation representing various legitimate and prestigious organizations from all over the world which openly met with government offices and officials – other than the police and military which gave us a runaround – will be subjected to brazen harassmen ourselves.

Even more outstandingly ironic is that we as international lawyers
made time to see things firsthand on the reported attacks on our peers and brethren out of genuine concern and who in good faith humbly put forward concrete recommendations for consideration by the authorities are ourselves the object of attack.

The respective embassies and missions of the members of our Delegation, the various international lawyers groups which organized, participated, supported and endorsed us, and the international community have been put on notice of this unacceptable harassment.

Indeed, to see and feel is to believe. And no amount of ad hominem insults and official denials of reality can change this matter of fact. But we will be back. #

Among the conclusions of the international delegation of lawyers: There has been a sharp increase in human rights violations, particularly extrajudicial killings under the Duterte administration | @anjocalimario pic.twitter.com/2KKUmb4Dmt

The International Delegation of Lawyers which looked into the attacks on Filipino judges, prosecutors, lawyers and paralegals claims it was “the subject of brazen threats, harassment, and surveillance yesterday.” | @anjocalimario pic.twitter.com/gzn2HAuRct

Iran: She defended Iranian women who removed their hijabs. Now she’s been given 38 years in prison. IN AN authoritarian system, it takes a tremendous amount of personal nerve to stand up for one’s rights. Many who do so suffer imprisonment, physical abuse and painful family repercussions. They also often rely on a few courageous lawyers who fight for them through arduous journeys in court and prison. But the authoritarians have figured this out and are punishing the lawyers, too. This is what is behind the shockingly severesentence given to Nasrin Sotoudeh, an Iranian human rights lawyer, who told her husband she has been given 38 years in prison and 148 lashes.

The prosecution of Ms. Sotoudeh is outrageous. Her crime? She defended women being prosecuted for peacefully protesting Iran’s compulsory hijab law by removing the head covering in public. The regime is clearly set on making an example of her. “First they went after the journalists, activists and dissidents. Now they’re going after their only line of defense,” said Hadi Ghaemi, executive director of the Center for Human Rights in Iran. A root-and-branch attack on rights defenders has also been waged in recent years by dictators in China and Turkey. In a genuine rule-of-law system, no one is above the law, but these tyrants and their security services have turned the notion on its head and created a black hole in which anyone who challenges authority can be incarcerated on flimsy accusations. According to the human rights group, Ms. Sotoudeh is among at least seven human rights attorneys who were arrested in Iran in 2018.

She was tried in absentia in a Revolutionary Court in Tehran. She refused to appear in court, after she was denied the right to choose her own lawyer. The actual length of the sentence is not definitively clear; she has not been informed in writing, she told her husband, Reza Khandan, in a brief phone call from Evin prison. She said the term was five years in one case and 33 in another case involving nine charges, although it could be reduced. The charges are of the bizarre and politically motivated type that dictators often throw at those who protest. According to her husband, they include: “assembly and collusion against national security,” “propaganda against the state,” membership in various human rights groups, “encouraging corruption and prostitution,” “appearing at the judiciary without Islamic hijab,” “disturbing public peace and order” and “publishing falsehoods with the intent to disturb public opinion.” 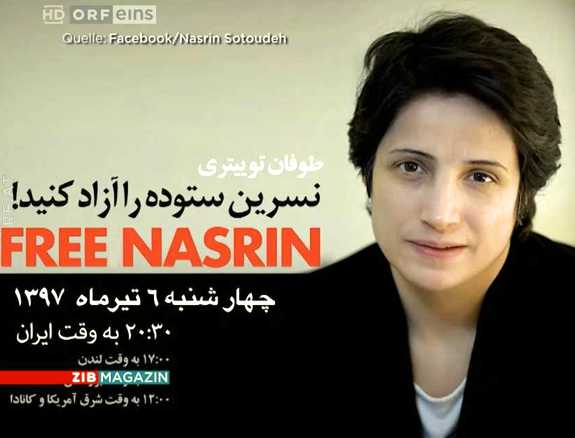 Defending #WomensRights is not a crime

148 lashes on her body and nearly 4 decades in prison. This is the awful punishment #NasrinSotoudeh will face for peacefully advocating for women’s rights in Iran. But our voices can help shine a light on this horror: Sign this petition to #FreeNasrin https://t.co/zT090bX8WU