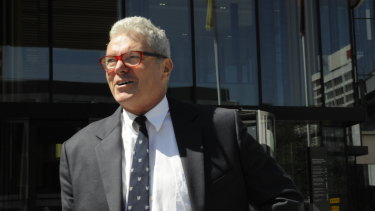 A former Australian military lawyer and captain in Britain’s elite Special Air Service has been charged over the leak of documents exposing alleged unlawful government conduct.

David William McBride, 55, appeared in the ACT Magistrates Court on Thursday where he was charged with the leaks to journalists Dan Oakes, Andrew Clark and Chris Masters.

He has not entered any pleas.

The investigation was said to give an unprecedented insight into the clandestine operations of Australia’s special forces, including incidents of possible unlawful killings.

Speaking outside court, Mr McBride said he had admitted handing over the documents but would defend the charge on legal grounds.

“I saw something illegally being done by the government and I did something about it,” he said.

“I’m seeking to have the case looking purely at whether the government broke the law and whether it was my duty as a lawyer to report that fact.”

Mr McBride is charged with theft and three counts of breaching the Defence Act, for being a person who is a member of the the defence force and communicating a plan, document or information.