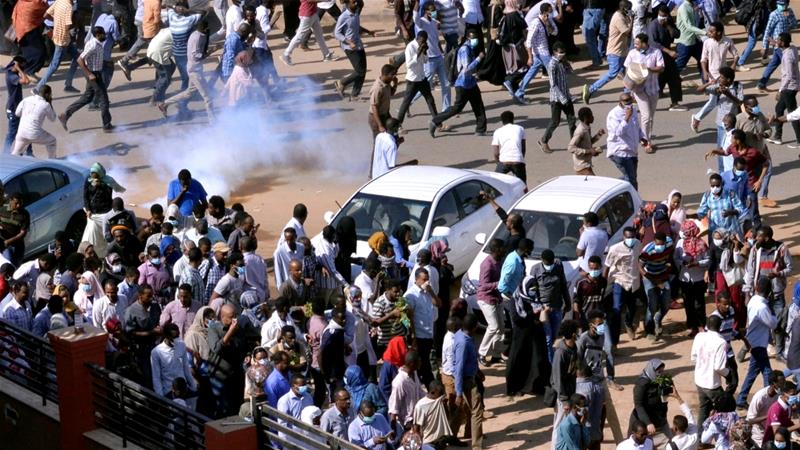 Sudanese security forces fired tear gas and live ammunition at hundreds of demonstrators in central Khartoum on Monday as demonstrators attempted to march to President Omar al-Bashir’s palace calling on him to step down.

Crowds of men and women chanting “freedom, peace and justice” and “revolution is the people’s choice” gathered in the capital’s downtown area where they were quickly confronted by anti-riot police, witnesses told AFP.

Officers made dozens of arrests as others looked on from rooftops and armoured vehicles with machine guns parked up in surrounding streets. Hundreds of policemen and security forces deployed to key squares across the capital in the early morning to prevent the march.

Al Jazeera’s Hiba Morgan, reporting from Khartoum, said: “Police have fired tear gas and live ammunition [during the protests]. Some [protesters] have reportedly been injured. It is not clear yet if there are fatalities.”

According to Sara Abdelgalil, president of the Sudanese Doctors’ Union in the UK, hospitals reported at least four protesters were wounded during the demonstrations.

“One fractured skull, one live bullet to the thigh, one in the neck and a burn in the neck from the tear gas. There are also cases of acute asthma attacks and other minor injuries,” Abdelgalil told Al Jazeera.

Several lawyers on strike outside courthouses in Khartoum and in Sudan’s second-largest city of Wad Madani were arrested, a lawyer told Reuters news agency.

Today’s procession organised by Sudan Prodessionals union will start in a few hours, in Khartoum, Hasaheesa and Sinnar. Supported with a lawyers’ strike which was declared in Medani. Umma party called on lawyers in party to join strike
31 Dec 18#SudanUprising