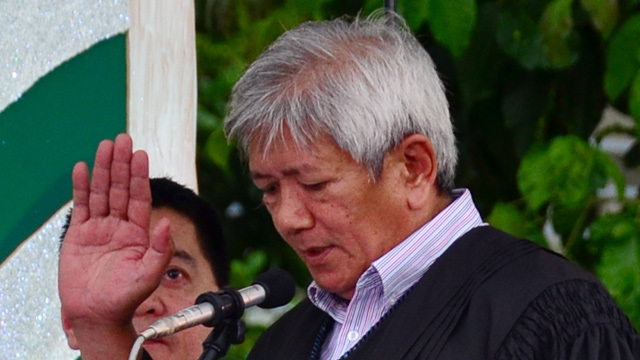 Chief Justice Teresita Leonardo-De Castro on Monday evening confirmed the death of an Ozamiz City judge and called on police to apprehend his killers as soon as possible.

In a press statement, De Castro said: “The Court is deeply saddened with the news that the executive judge of the Regional Trial Court of Ozamiz City, Hon. Edmundo P. Pintac, was shot to death on his way home today.”

Pintac, who had been an RTC judge for 15 years, had been handling drugs and firearms cases against Nova Princess Parojinog and Reynaldo Parojinog Jr, who were arrested in simultaneous raids against the clan in late July 2017.

“I’m calling on the Philippine National Police to exert all means and efforts to apprehend the perpetrators at the soonest possible time. I have also instructed the court administrator to coordinate with all law enforcement officers to bring to justice those responsible for this crime,” the chief justice also said.

Attacks on Judges & Lawyers:
Too many, too frequent, too brazen already

NUPL expresses its sadness and outrage over yet another attack against a member of the legal profession.

We condemn in the strongest terms the cold-blooded murder of Executive Judge Edmundo Pintac. He was gunned down by unidentified assailants in Ozamis. Inflicting injury and suffering on anyone, whether as an act of aggression or revenge, can never be justified.

The rampant and continuing attacks against judges and lawyers are deeply disturbing. Just this year alone, at least twelve lawyers and judges were atrociously killed in the Philippines, while many others have been subjected to intimidation and harassment.

The rising body count and unresolved cases is a reflection of seemingly unstoppable impunity. This is a serious indictment of the present state of law and order and an open disregard of the “rule of law.”

We ask the legal community and the Supreme Court to deplore these attacks for attacks on individual lawyers are attacks against the independence of the judiciary and the whole justice system. These killings have a chilling effect on members of judiciary in the discharge of their functions. The existence of attacks and threats to legal professionals in a country with already outrageous levels of impunity weakens the very basis of democracy.

We demand these senseless taking of life and threats be immediately resolved.
We demand the government to take action for the cessation of these attacks. The government must take decisive action to mitigate the risks they face as a result of their work. The government must ensure that lawyers are able to perform all of their professional functions without intimidation, hindrance, harassment or improper interference. It must ensure respect of lawyers and legal profession, investigate human rights violations and give justice to our endangered lawyers.#

The Systematic Repression of Lawyers in Central Asia and Eastern Europe

The Systematic Repression of Lawyers in Central Asia and Eastern Europe

Freedom House is gravely concerned by an apparent systematic crackdown on the legal profession by a number of OSCE participating States. Since 2017, restrictive legislative changes and punitive measures targeting individual lawyers were especially egregious in Azerbaijan, Tajikistan, Kazakhstan, and Crimea. The intense persecution of the legal profession undermines individuals’ essential right of equal access to justice, especially those who openly call for government accountability, such as human rights defenders, journalists, social and political activists. Often, legal action is the only available recourse for individuals and associations to seek redress for violations of their fundamental rights and freedoms.

Due to governments’ threats both to lawyers and their would-be clients, the number of lawyers able to take on human rights cases is dwindling. Without a strong, independent judiciary and lawyers free from harassment, however, governments cannot claim to be fulling their obligations to protect the fundamental human rights of their citizens. Attacking the legal profession appears to be the final step in dismantling a system in which citizens can find recourse against unjust treatment by their own governments within the existing legal framework.

In Azerbaijan, the national parliament amended the ‘Code of Civil and Administrative Procedure’ and the ‘Bar Act’ in October 2017 to state that only members of the Azerbaijan Collegium of Advocates can represent clients in court, substantially cutting the proportion of lawyers to the population to one of the lowest rates in the region.[1]Furthermore, authorities summarily disbar prominent human rights lawyers and deny accreditation to junior advocates. Lawyers including Khalid Baghirov, Aslan Ismayilov, Alaif Hasanov, Elchin Namazov, Yalchin Imanov, Farhad Mehdiyev, Muzaffar Bakhshaliyev, Annaghi Hajibeyli, Aliabbas Rustomov, and Intigam Aliyev have all had their bar membership suspended or revoked shortly after raising human rights concerns on behalf of clients or criticizing the government.[2] Junior lawyers are unable to join the Collegium of Advocates due to its bias against lawyers connected to human rights cases. Samed Rahimli, known for taking on political contentious cases, describes his interviewers from the Collegium of Advocates as being openly hostile towards him and accusing him of trying to destroy the collegium. This systematic persecution of human rights lawyers has left the country with only six practicing human rights lawyers, according to Intigam Aliyev, a human rights lawyer previously jailed for his work.[3]