In response Bar Association pulls regular course at Peking University, which has been running since 2011

A mainland Chinese university blocked two Hong Kong human rights lawyers from teaching a course delivered by the city’s Bar Association earlier this year, and told the group’s chairman not to attend a course ceremony, it has emerged.

Philip Dykes, who was elected association chairman this January, revealed the news in a circular to his members on Monday, as the Post learned separately that the group’s regular Beijing meet-up with officials and judges would probably not happen this year.

A source said the two barristers Peking University objected to were human rights lawyer Hectar Pun and Cheung Yiu-leung, vice-chairman of the China Human Rights Lawyers Concern Group. They were not allowed to teach the common law course and asked to be replaced, despite having done so for several years. Both have not replied to Post requests for comment.

But a few other members from the group who had also taught on the month-long programme, which ran annually at the university from 2011, were not blacklisted. The course still went ahead this year.

Dykes revealed he was not allowed to attend the closing ceremony of the course in Beijing in June, which he had intended to join to “get to the bottom of the refusal” of the two members continuing their lectures.

Labor lawyer and activist Haytham Mohamadeen was handed a 15-day detention renewal order by the Supreme State Security Prosecution on Monday in Case 718/2018, according to lawyer Maha Youssef.

Mohamadeen was arrested on May 17 and faces charges of joining a terrorist group and inciting protests over the March metro fare hikes. 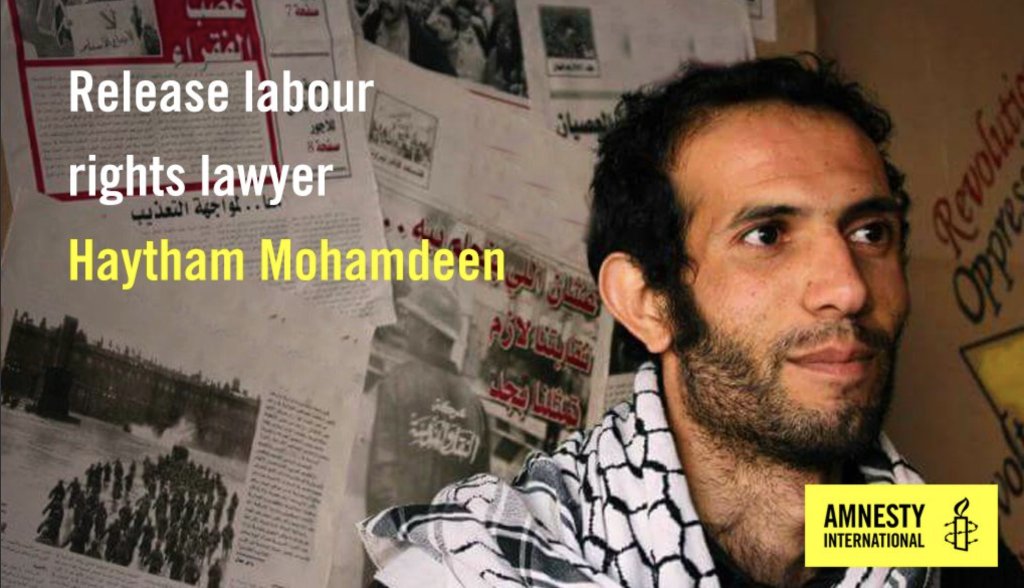 One of Iran’s most prominent human rights lawyers, Abdolfattah Soltani, was granted furlough from Evin Prison to mourn his daughter’s death on August 4, 2018.

Soltani’s 30-year-old daughter, Homa, had passed away on August 3 from a heart attack. Video clipsposted on social media showed the moment Soltani was reunited with his remaining family at a mourning ceremony for his daughter. One clip shows Soltani breaking down into tears as he embraces his wife, Masoumeh Dehghan, who is wailing.

It is not clear how long Soltani will be allowed to stay on furlough. On August 5, his lawyer Saeed Dehghan called on President Hassan Rouhani to seek Soltani’s release.

Soltani, 64, has been eligible for release since 2014 but the Intelligence Ministry, which operates under Rouhani, has blocked his freedom despite Soltani’s deteriorating health, according to his surviving daughter, Maede.