Egypt: Lawyer: Egyptian Who Called for Referendum Is Arrested

The lawyer for a former diplomat who called for a referendum on Egyptian President Abdel-Fattah el-Sissi’s government has been arrested.

Khaled Ali says he was told by Masoum Marzouk’s family that he was taken from his home on Thursday and that his whereabouts are unknown.

Marzouk called for the referendum earlier this month and proposed a roadmap for a political transition if Egyptians voted against the government. He said if the government did not respond positively to the initiative he would hold a “popular conference” in Cairo’s Tahrir Square — epicenter of the 2011 uprising — on Aug. 31.

Kenya/Canada: I’ll Be Back To Kenya After September 4, Miguna Miguna

Controversial lawyer turned politician Miguna Miguna has announced that he’ll be back in the country after September 4 after spending three months in Canada.

In a tweet, Miguna attributed his troubles to President Uhuru Kenyatta and Nasa leader Raila Odinga.

“For the cowards with low self-esteem celebrating the fact that @UKenyatta and @RailaOdingadestroyed my valid Kenyan passport and my house, abducted, detained and tortured me before forcefully removing me, mark this in permanent ink: I am coming back after September 4th,” tweeted Miguna.

Miguna’s troubles began when he controversially swore in Raila Odinga on January 31 after a hotly contested Presidential election which was nullified by the Supreme Court. Later, a repeat election was held in which the NASA coalition bolted out citing plot by Jubilee and IEBC to rig the polls.

Things turned from bad to worse when Uhuru and Raila reconciled in the famous handshake deal, seemingly leaving Miguna to his own. He was left with a choice to either follow the new unity pact or continue championing the Nasa dream. Miguna chose the latter, which saw him thrown out of the country twice on grounds that he was not a bona fide Kenyan citizen.

Miguna was deported to Canada on May 29 despite a court order directing the government to release him from detention at Jomo Kenyatta airport in Nairobi.

Miguna was taken out of Kenya via a Dubai-bound EK722 flight. Before being deported, Miguna said that he was harassed, drugged and dragged to a Dubai-bound flight. He was later on arrival at Dubai admitted in a Dubai hospital after travelling in an unconscious state to Dubai.

On September 3 and 4, 2018 from 9am, my advocates, led by Dr. Khaminwa and @waikwawanyoike will be seeking JUSTICE on my behalf and FINAL ORDERS against the Despots at the High Court, Milimani. You are free to attend. Re-Tweet, share and shame tyranny. #BringMigunaBack

Since May, at least 12 leading human rights activists in Saudi Arabia have been detained without charge. Loujain al-Hathloul, Iman al-Nafjan and Aziza al-Yousef were all imprisoned on 15 May and today (23 August) marks 100 days since their detention.

“It is absolutely outrageous that so many brave human rights defenders in Saudi Arabia are still being held without charge – apparently for simply speaking out against injustice,” said Samah Hadid, Amnesty International’s Middle East Director of Campaigns.

“They have been detained without charge and with no legal representation for more than three months. This must not go on any longer. The world cannot carry on looking the other way as this relentless persecution of those who stand up for human rights in Saudi Arabia continues.”

To mark the 100 day anniversary, Amnesty International is today mobilising its supporters worldwide to stand with the detained human rights defenders. As part of the campaign, Amnesty International supporters are gathering in multiple cities around the world to protest outside of Saudi Arabian embassies. They will be putting pressure on the Saudi Arabian authorities, as well as their own governments, to take action to secure the release of the women human rights defenders and all prisoners of conscience who have been detained solely for the peaceful exercise of their human rights in Saudi Arabia.

Loujain al-Hathloul, Iman al-Nafjan and Aziza al-Yousef have faced accusations in state-aligned media which include forming a “cell” and posing a threat to state security for their “contact with foreign entities with the aim of undermining the country’s stability and social fabric”. Amnesty International understands that the three women may be charged and tried by the country’s notorious counter-terror court, which has been used in other instances to try human rights defenders and deliver harsh prison sentences.

So far, a total of 12 human rights defenders have been detained: eight women and four men. The crackdown began shortly before Saudi Arabia lifted the ban on women driving in the country. Many of the activists detained campaigned for the right to drive and the end of the repressive male guardianship system in Saudi Arabia for many years.

The grieving family of lawyer Steven Kariuki Mburu were busy finalising his burial plans on August 2 when a video clip circulating on social media shook them to the core.

The footage showed Nairobi Governor Mike Sonko alleging that Mr Mburu, who had been found dead in a guest house in Oloitokitok on July 27, had been murdered to cover up the theft of Sh58 million by former county officials.

The news was startling because a post-mortem had not revealed any evidence of foul play, leading Mburu’s relatives to accept his death with heavy hearts. In fact, according to family members, the lawyer had a history of high blood pressure and other health issues.

But with speculation rife that Mburu did not die from heart failure, additional toxicology tests were ordered to either offer irrefutable proof or put the claims to bed.

And with a family member now claiming that Mburu’s phone, which went missing, keeps being switched on and off, a lot rests on those lab results. On August 22, 2018, 60 members of the European Parliament (MEP) called on Iranian President Hassan Rouhani to “do all within your power to ensure” the “unconditional release” of human rights lawyer Nasrin Sotoudeh. A 2012 recipient of the European Parliament’s Sakharov Prize for Freedom of Thought, Sotoudeh has been detained since June 13, 2018. Having formerly served three years in prison for peacefully defending her clients in the Iranian judicial system, Sotoudeh is currently facing many more years behind prison under several national security charges. Following is the letter sent by MEP Marietje Schaake to President Rouhani.

We write to express our deep concern about the continued detention of Sakharov laureate Nasrin Sotoudeh. She was arrested in June of this year to serve a five-year prison sentence for previously unreleased charges, apparently solely because of her human rights work.

Last week it was revealed that Nasrin Sotoudeh is facing new charges, reportedly including charges of espionage, which is an extremely worrying development. Her case signifies that the Iranian judiciary continues to criminalise legitimate human rights activism.

We urge you to call on the judiciary to respect due process and disclose information about the charges that Nasrin Sotoudeh is facing, and we call on you to do all within your power to ensure her unconditional release. 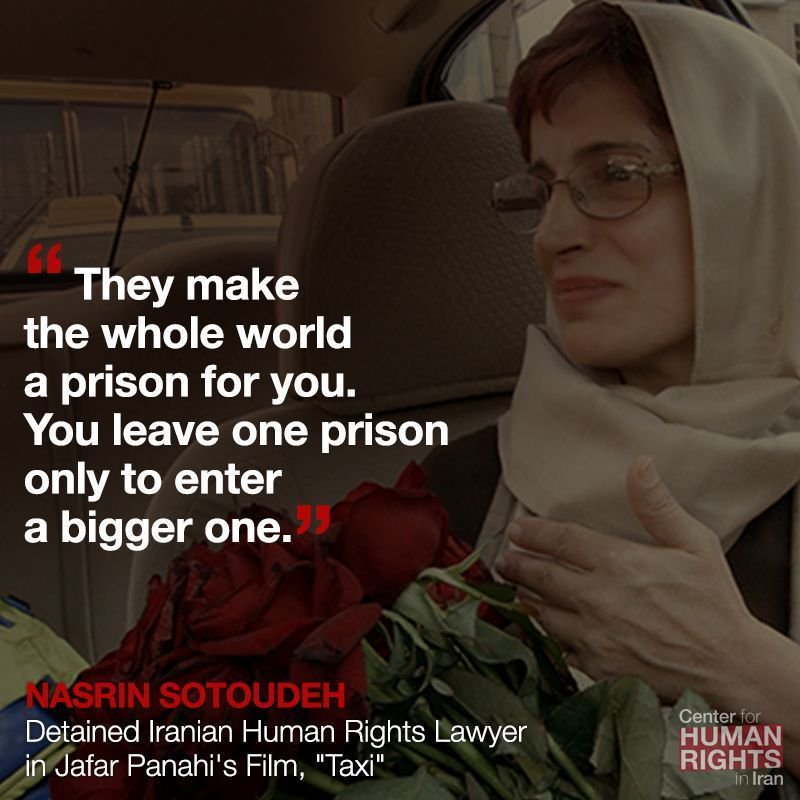