Your Excellency,
I am writing to you on behalf of the Council of Bars and Law Societies of Europe (CCBE), which represents the bars and law societies of 45 countries, and through them more than 1 million European lawyers. The CCBE places great emphasis on respect for human rights and the rule of law, and is particularly concerned with the situation of human rights defenders around the world.
The CCBE would like to express its concern regarding the detention of lawyer Haytham Mohamadeen.
According to the information received, on 15 May 2018, Haytham Mohamadeen was arrested in El Saf in Giza Governorate. He was detained in an unknown location. On 19 May 2018, the Supreme State Security Prosecution in Cairo ordered a detention of 15 days pending an investigation on charges of “aiding a terrorist organisation” and “calling for illegal protests”.
We understand that Haytham Mohamadeen did not take part in protests and that he offers pro-bono legal advice to workers. He is also a member of El-Naddim Centre for the Rehabilitation of Victims of  Violence, an Egyptian NGO dedicated to combating torture and providing medical and legal aid in support of victims of human rights’ abuses. The Maldives government’s intimidation of the political opposition and media threatens prospects for free and fair elections in September 2018, Human Rights Watch said in a report released today. The government of this Indian Ocean archipelago has also interfered with the judiciary and the national electoral commission in order to tighten its grip on power.

“The Maldives government has cracked down on any and all dissent, from activists and journalists to Supreme Court judges,” said Brad Adams, Asia director. “Immediate steps are needed to restore political freedoms and democratic rule to ensure free and fair elections in September.”

The 52-page report, “‘An All-Out Assault on Democracy’: Crushing Dissent in the Maldives,” documents how the government of President Abdulla Yameen Abdul Gayoom has used decrees and broad, vaguely worded laws to silence dissent and intimidate, arbitrarily arrest, and imprison critics. These include counterterrorism laws widely used against opposition activists and politicians; anti-defamation laws used against the media and social media activists; and restrictions on assembly that prevent peaceful rallies and protests. Religious extremists and criminal gangs – including many that enjoy political protection – have assaulted and sometimes murdered dissenters with impunity. This has had crippling effects on the Maldives’ nascent democracy and struggling civil society.

Rights group Amnesty International called on the Philippine government to respect the rights to freedom of expression and assembly of activists, including non-nationals, days after an elderly Australian professor was expelled from the country.

Gill Boehringer, who was expelled Tuesday, was the latest foreigner ordered out of the Philippines following Australian nun Patricia Fox, who has been fighting deportation since April after earning the ire of President Rodrigo Duterte.

The 84-year-old Australian professor and human rights advocate was blacklisted due to his reported participation in a mass demonstration in 2015. He denied the allegation.

His expulsion took place a month after three Methodist missionaries from Malawi, the United States and Zimbabwe left the country after they were ordered to leave by the Bureau of Immigration for supposedly engaging in political activities.

AI feared that the denial of entry to and expulsion of human rights activists might create a negative effect on the exercise of the rights to freedom of expression and peaceful assembly by foreigners.

“[They] may now decide to reduce their activities in the country for fear of the action the Philippine authorities might take against them,” it said.
Read more at https://www.philstar.com/headlines/2018/08/17/1843435/amnesty-international-urges-govt-stop-harassment-foreign-activists#M5wY7zf6O3k0pIJJ.99 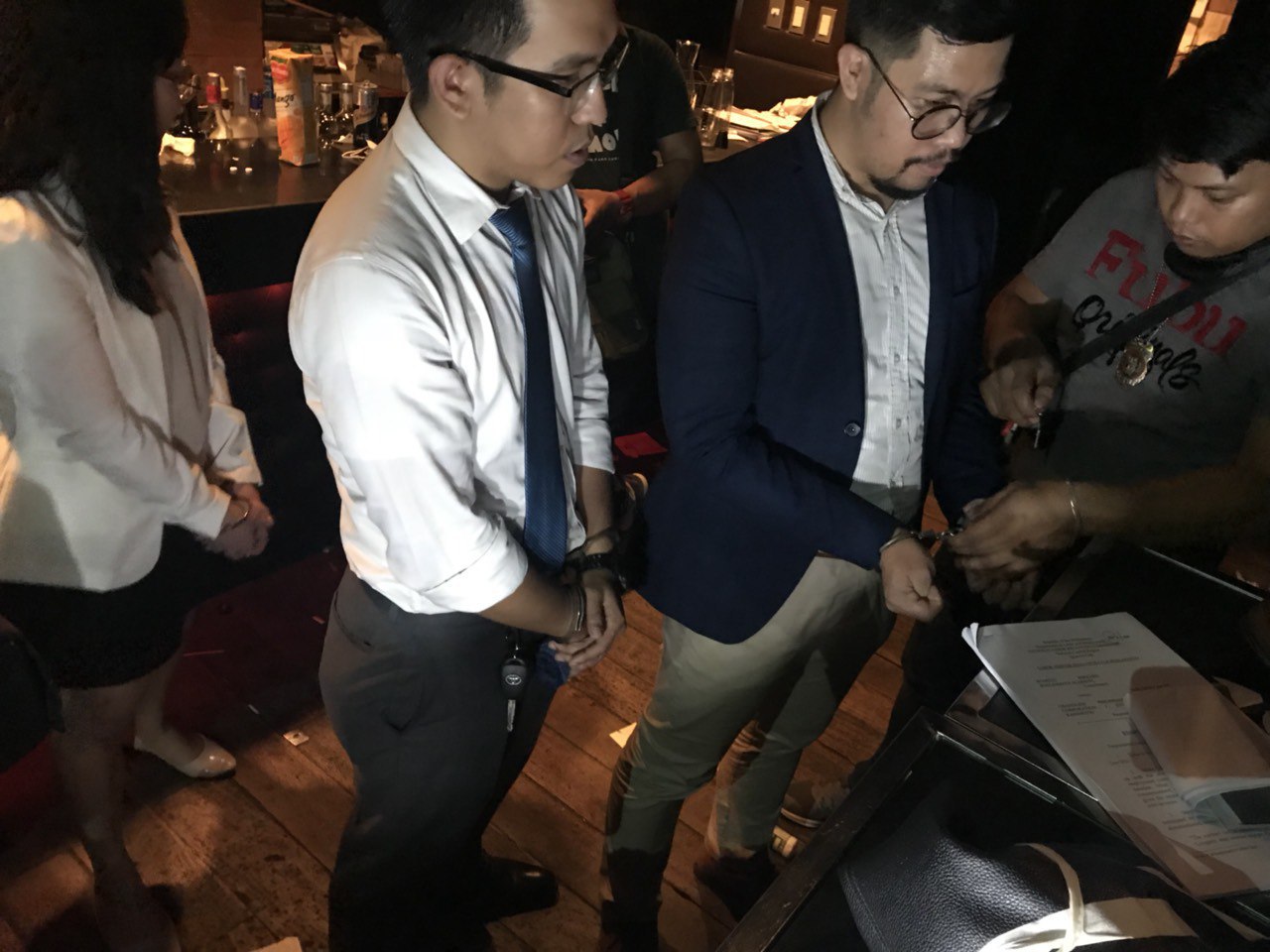 For monitoring a police inventory of a drug raid, 3 lawyers were detained at the Makati Police Station on Thursday, August 16, after cops arrested them for alleged obstruction of justice.

Jan Vincent Sambrano Soliven, Lenie Rocel Elmido Rocha and Romulo Bernard Bustamante Alarkon are the lawyers for the Times Bar in Makati, which was raided by the Southern Police District (SPD) on Saturday, August 11, for allegedly selling party drugs to customers.

The lawyers were monitoring the inventory of the bar on Thursday, when they were apprehended for taking down notes and photos as the police opened cabinets.

“The police opened the cabinets, took their inventory, and then turned to my three young lawyers and said they had no authority to be there. My lawyers respectfully said they were legal counsels of the owner and were just sent by the firm to take notes and photograph the opening of the cabinets,” said Diane Desierto, a partner of the firm where the lawyers work.

The Desierto & Desierto law firm represents one of the owners of the Times Bar, where police reportedly seized sachets of suspected cocaine, ecstacy capsules and tablets, marijuana and drug paraphernalia when they raided it on Saturday.

Role of Lawyers in the Rule of Law: We are not the Enemy

The attacks on lawyers assisting or representing clients allegedly involved in drugs have been going on in various forms.

One NUPL lawyer in Bicol continues to dodge actual death threats. An NUPL ally lawyer in Iloilo has been charged with obstruction of justice years back. Rights lawyers who have been critical have been maligned and demonized as villains by drug-crazed authorities.

Now these three (3) Makati young lawyers openly performing their professional duties during a police search are arrested and treated like criminals.

This is not only against the so-called rule of law but against the role of lawyers. Lawyers — the decent and professional ones anyway— are officers of the court and defenders of justice. They are there to ensure rights are protected even if they help bring the guilty to perdition. We are not the enemies.

The UN Principles on the Role of Lawyers and the Philippine Code of Professional Responsibility guarantee that lawyers are able to perform all of their professional functions without intimidation, hindrance, harassment or improper interference or be threatened with sanctions for any action taken in accordance with recognized professional duties, standards and ethics.

When the police arrogantly act as judge, jury and executioner, and with brazen impunity and boorishness at that, then a breakdown in law and a startup in disorder reigns. Then the failing bloody “war on drugs” becomes a drugged war. And we are all none the safer. #

The arrest of three young lawyers, who were monitoring the service of a search warrant, highlights the complete degradation of law enforcement and the collapse of order in the country.

As counsel of the property owner, the three lawyers were legally entitled to be present during the search. Search by police of private premises, if with color of law, requires witnesses. According to the Desierto & Desierto Law Firm, they were documenting the opening of cabinets, “quiet and passive”, at Times Bar in Makati owned by their client.
Lawyers while in the legitimate exercise of their profession are considered officers of the court and aides to the administration of justice. Hence,they are entitled to due courtesy and respect.

Arresting, detaining, and charging them, ironically, with obstruction of justice shows how police have become brutal and high-handed in their operations, especially in those involving drugs. What more can they be toward people who know nothing about the law?

The Manananggol (Manlaban) sa EJK soundly denounces the arrest of lawyers while in the peformance of their duties. This blatant show of excess and abuse by the police is a clear disregard of the law and independence of the legal profession, a direct and inevitable result of Duterte’s unrelenting anti-drug war. Police high on power have gone wild and senseless, with only the barest regard for law or order.

Manlaban demands the immediate release of the lawyers and the dropping of charges. And not only will we stand by our colleagues in the profession who are at the frontlines, we join them in battle for reason and sanity. Police should expect countersuits as lessons in law and pain of penalty so timely due.

China: China Moves Ahead With Subversion Trial of Rights Lawyer in Jiangsu

Authorities in the eastern Chinese province of Jiangsu have indicted human rights lawyer Yu Wensheng on subversion charges, paving the way for a trial, his wife said on Thursday.

Yu, who is being held incommunicado by authorities in Jiangsu’s Xuzhou city, was formally arrested for “incitement to subvert state power”and “obstruction of officials in the course of their duty” in April.

He was indicted last month, but neither his lawyers nor his wife, Xu Yan, were informed about the move.

“His two attorneys enquired about Yu Wensheng’s case with the Xuzhou municipal procuratorate, which checked and found that the indictment was issued on July 19,” Xu told RFA.

She said two lawyers she hired to represent Yu, Chang Boyang and Xie Yang, hadn’t been informed of the indictment.

“They weren’t allowed to see him, nor to read the case files,” she said.

Jiangsu officials issued a statement in April claiming to be penned by Yu, and firing his defense team. However, Xu pointed to an earlier video statement asking her to disregard any such declaration.