Attorney Igor Tretyakov, whom the Investigative Committee placed on the wanted list in the embezzlement case related to the leadership of one of the largest enterprises of Roskosmos, NPO im. Lavochkina (Scientific and Development Center named after Lavochkin), is at the aquabike festival at Lake Baikal and plans to arrive in Moscow.

As Tretyakov told RBC, two weeks ago he had been interviewed at the Investigative Committee, he did not sign a written undertaking not to leave and is not going to hide from the investigation.

“It’s hard for me to talk about the criminal case, I was questioned two weeks ago in the office of the Investigation Committee for the Moscow Region, and I explained my position. Now, I found out that my office and apartment were raided; I do not know what they found there,” says the lawyer.

Igor Tretyakov said that he gave his phone number to the Investigative Committee employees, but nobody tried to contact him. “I am a law-abiding citizen; since 2001, I have been working as a lawyer, I understand what is the consequence and what the ICR is, I certainly would have appeared and given any information necessary,” says Tretyakov. When asked if he would go to the Investigative Committee upon his return to Moscow, Tretyakov replied: “I think that I will be collared right away at the airport.”

On Wednesday, July 25, the Investigative Committee brought a charge against the director of NPO Lavochkina, Sergey Lemeshevsky. He is suspected of embezzlement on a particularly large scale (part 4 of Article 159 CCRF), as previously reported by RBC. The website of the ICR states that Lemeshevsky, together with the head of the Directorate of NPO’s Legal Support Department, Yekaterina Averyanova, concluded fictitious contracts for the provision of legal services with the lawyer’s firm Tretyakov and Partners, which in fact were performed by full-time employees of the NPO’s legal department. The total amount of payments to the attorney’s firm for two years was about 330 million rubles ($ 5,230 million), reported the ICR.

Argentina/Iran/Israel: BEN-DAT: IRAN MUST BE HELD ACCOUNTABLE FOR ARGENTINE BOMBING

Earlier this month, a federal judge in Argentina formally asked the government of Russia to arrest Ali Akbar Velayati, an Iranian diplomat who traveled to Moscow to meet with Russian President Vladimir Putin.

Velayati, a personal envoy of Iranian Supreme Leader Ayatollah Ali Khamenei, travels the world these days to ensure that other governments hear the views of Iran’s ruling theocrat, particularly on the subject of the 2015 nuclear agreement.

Argentinian prosecutor Alberto Nisman, who investigated the bombing, was able to prove that the authorization for the attack was made during a meeting of Iran’s National Security Council on August 14, 1993. Nisman compiled an unassailable dossier of evidence that implicated several Iranian officials, including Velayati, in the horrible crime. Indeed, Velayati and seven other Iranian officials have been the subjects of international arrest warrants since 2006.

Nisman was eventually murdered for his fearless investigations. His killer, or killers, remain at large.

Nobel Peace Prize winner and former president of East Timor Jose Ramos-Horta says charges should be dropped against two men who exposed Australia’s spying operation on the East Timor cabinet room during a lucrative oil and gas deal in 2004.

Canberra lawyer Bernard Collaery and former intelligence agent Witness K are facing prosecution on charges of breaching the Intelligence Services Act five years after details of the operation were initially reported in the media.

Mr Ramos-Horta was the foreign affairs minister for East Timor while the sensitive oil and gas negotiations were taking place in 2004 and served as president for the fledgling nation from 2007 to 2012.

“Witness K and the barrister Bernard Collaery did not commit an act of treason in a situation of war between Australia and China or Australia and North Korea,” Mr Ramos-Horta told the ABC.

Hassan Saeed was suspended for calling two High Court judges “the most corrupt judges in the world.” A top judge has been authorised to return to work after two years of suspension over alleged misconduct.

Hassan Saeed, chief judge of the family court, was suspended by the judicial watchdog after he accused High Court Judges Abdulla Didi and Shujau Usman of being the “most corrupt judges in the world.”

The Judicial Services Commission’s director told local media on Wednesday that the oversight body has decided not to continue the investigation into the remarks.

The civil court previously rejected Hassan Saeed’s request to lift his suspension pending the outcome of the investigation.

Didi and Usman had been under fire over the sentencing of former president Mohamed Nasheed and former defence minister Mohamed Nazim in March 2015.

The advocate D’Souza and his four clients who are workers of Balton Ltd were arrested on July 30, 2018 and put under police custody for 48 hours before they were set free on Tuesday. 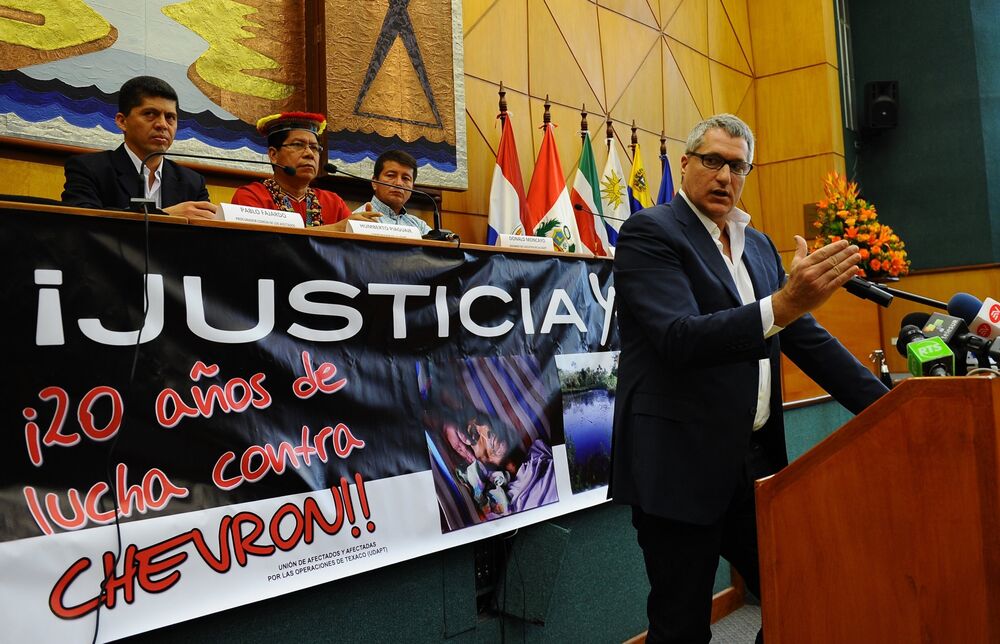 Paul Doyle, a corporate lawyer appointed by the New York bar to recommend possible discipline of prominent human rights defender Steven Donziger – the lawyer who helped Ecuadorian Indigenous peoples win a landmark $9.5 billion pollution judgment against Chevron — has resigned his post after the disclosure that he had helped Union Carbide escape liability in the Bhopal disaster in India that has killed an estimated 15,000 people.

A New York appellate court appointed Doyle in early July to determine whether Donziger should be disbarred after staff attorneys at the Manhattan grievance committee – apparently at the behest of Chevron — deemed him an “immediate threat to the public order” and suspended him on an interim basis without a hearing based on the disputed civil findings of a New York judge that have been contradicted by 17 appellate judges in Ecuador as well as by extensive forensic evidence.  Donziger, a Harvard Law School graduate, has worked for two decades to help Ecuadorian rainforest communities hold Chevron accountable for the dumping of billions of gallons of toxic oil waste into the Amazon rainforest in what is considered the world’s worst oil-related catastrophe, known globally as the “Amazon Chernobyl”.

In 2011, the affected Ecuadorian communities with Donziger’s help won a $9.5 billion judgment against Chevron in Ecuador — the venue where Chevron insisted the case be heard. The Ecuador trial court found Chevron had systematically dumped toxic waste into streams and rivers, poisoning the drinking water of local communities. The pollution plunged the region into a humanitarian crisis that Donziger calls “a slow genocide.” Cancer, birth defects, and other diseases have killed, or threaten to kill, thousands of people. Three appellate courts in Ecuador – including the country’s Constitutional Court in an 8-0 ruling – have affirmed the judgment based on more than 100 expert evidentiary reports and 64,000 chemical sampling results.

Prominent Kazakh human rights activist Vadim Kuramshin has been granted early release on parole after serving more than 6 1/2 years in prison on extortion charges that his supporters said were politically motivated.

A lawyer for Kuramshin, Muratbek Irge, told RFE/RL that a court in the northeastern city of Oskemen agreed on August 1 to parole Kuramshin.

He will be released in 15 days if the ruling is not appealed and overturned, Irge said.

Kuramshin has become known for his efforts to raise awareness of violations of inmates’ rights in Kazakh penitentiaries, including the one where he served his term.

He was sentenced to 12 years in prison in 2012 on an extortion conviction. He denies wrongdoing.

In December 2013, while behind bars, Kuramshin was awarded the prestigious Ludovic-Trarieux international human rights prize. 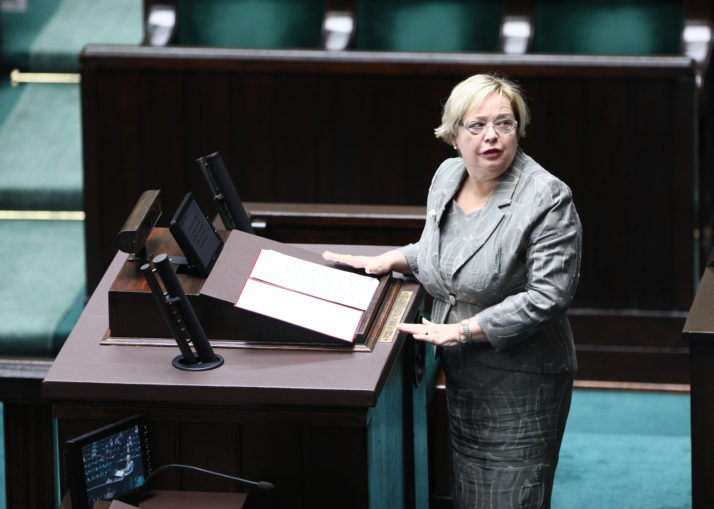 Poland’s Supreme Court on Thursday suspended the application of a law forcing the early retirement of older judges and turned to the European Court of Justice to rule on whether recent changes to the court’s functioning violate EU rules.

The move pulls the EU’s top court into the midst of an ongoing constitutional battle in Poland, where the ruling Law and Justice party has been accused of revamping the judicial system to bring it under tighter political control. The party says the steps are needed to cleanse the justice system of corruption and ties to the old communist regime.

One of the measures passed last month imposes a retirement age of 65 on Supreme Court justices, suspending about 40 percent of its judges including its president, Małgorzata Gersdorf.

Judges wanting to stay on past that age are supposed to ask permission from President Andrzej Duda, something most have refused to do, saying it weakens the independence of the judiciary.

Gersdorf has also refused to comply, arguing the measure violates the Polish constitution, which gives her a six-year term ending in 2020.

Chinese rights lawyer Wang Quanzhang, who has been held in police detention without trial for three years, has been forced to take medication while in the custody of the Tianjin No. 1 Detention Center, his wife said on Thursday.

Just days after Li was told by a lawyer that Wang was looking well, she was informed by Liu that her husband had been force-fed an unknown medication while in police detention. Liu had just visited Wang, and has been engaged as his attorney, she said.

“The lawyer told me that the doctors had carried out a health check, and said he had high blood pressure,” Li said. “I would like to say that he never had it before he was detained; he was in very good health.”

“I don’t know why his health is in such a poor state now, because [high blood pressure] takes a long time to do damage.”

She added: “Mr. Liu told me that during his meeting with Wang Quanzhang, Quanzhang seemed very frightened, as if he daren’t speak too loudly. For a lot of the time, he just mouthed what he needed to say.”

She said Liu was unable to much of what Wang said clearly, but he did hear him say that he had high blood pressure, and that they were making him take medication.

709 Crackdown Three Years on: ‘You’re Guilty of Whatever Crime They Say You Are’

709 Crackdown Three Years on: Mother and Lawyer Reveals Brutality Against Her Teenage Son for the First Time

709 Crackdown Three Years on: ‘We Don’t Accept the Communist Party’s Attempt to Instill Terror in Us’

709 Crackdown Three Years on: The Many Methods by Which the Chinese Communist Party Cracks Down on Human Rights Lawyers

709 Crackdown Three Years on: ‘If This Country Can’t Even Tolerate Lawyers’

709 Crackdown Three Years on: ‘I Stayed Because I Want to Change It’

Iran’s judiciary has extended the detention of prominent human rights lawyer Nasrin Sotoudeh, who is facing two national security charges for peacefully engaging in her profession. “When her one-month detention order expired, they extended it for another month after a 10-day delay,” her husband Reza Khandan told the state-funded Iranian Students News Agency on July 30, 2018.

Sotoudeh, the legal counsel for at least two women who had been arrested in Iran for removing their hijabs in public, has been detained since June 13, 2018.

In addition to “assembly and collusion against national security,” she has also been charged with “propaganda against the state” for allegedly being a member of Legam, an Iranian organization opposed to the death penalty, according to Khandan.

Before her arrest, Sotoudeh and a group of other human rights lawyers in Iran had signed a letter criticizing the judiciary’s decision to restrict counsel for detainees facing politically motivated charges to a list of 20 state-approved lawyers.