Venezuela: Calling for the Immediate Release of Detained Venezuelan Lawyers

As reported by Rachel Sanchez, working as a coordinator at Foro Penal in Táchira state in western Venezuela, her two colleagues were detained at lunchtime by Fuerzas de Acciones Especiales, FAES, a special division of the Venezuelan National Police, supposedly responsible for combating organised crime. They have not been heard of since.

The fact that several human rights organisations in Venezuela accuse FAES for hundreds of extrajudicial killings the last couple of years, increases Civil Right Defenders’ preoccupation with the security of Orlando Gonzalez and Oscar Rios.

Lawyer Vitalie Taulean claims to have been physically assaulted by two policemen, who hit his head against the ground and brought him to the Prosecutor’s Office of Chisinau for questioning. The prosecutor claims that the defender did not comply with the legal requirements of the police. The lawyer needed medical assistance.

Vitalie Taulean was detained on Friday in front of the Rascani District Court of Chisinau, where he came to assist a client in a trial.

The lawyer says he did not follow the prosecutor’s order to be forcibly brought for interrogations because it is illegal therefore, he challenged it.

President of the Lawyers’ Union, Emanoil Plosnita, also came to the Prosecutor’s Office.

“I am a lawyer, I know the laws and they have done this to me. And how will they behave with simple citizens?”, Taulean asked while talking to Plosnita.

Although he was brought to the Prosecutor’s Office, Taulean could not be questioned because he had a hypertensive crisis and was taken to the hospital.

UK: You might not care about striking lawyers – but you should

We are already seeing the dreadful effects of legal underfunding, as people are forced to defend themselves with only the vaguest idea of what they’re doing 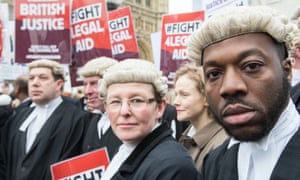 here is a strike under way that you’ve probably barely heard about, although its implications are as grave as any that make the headlines. This one doesn’t involve train drivers, enraging as those stoppages are for stranded commuters. It doesn’t involve university lecturers, diverting as those have been for students, or even junior doctors. It involves criminal barristers from 100 chambers who, in protest against government reforms of legal aid fees, are refusing to take on new publicly funded cases – or in other words, defences of people who can’t afford their own lawyers.

The courts haven’t ground to a halt, so defendants are still ending up in the dock. It’s just that more of them are now attempting to represent themselves, often with only the vaguest idea of what they’re doing, on charges ranging all the way up to murder. The risk of miscarriages of justice is screamingly obvious, especially when it comes to disclosure of evidence – how are complete amateurs to know what useful material the prosecution could be hanging on to? – but defendants are not the only potential victims here. If it’s hard enough for witnesses to relive distressing experiences with the accused glowering silently at them from the dock, then imagine what it’s like when he or she’s the one conducting the cross-examination. Since 15 May 2018, Saudi authorities have detained ten advocates for women’s rights, including leaders and supporters of the #Right2Drive and #IAmMyOwnGuardian campaigns. Seven people of those detained – three women and three men – have been publicly named and branded as traitors, along with a seventh un-named man (see graphic at left above).

The Gulf Centre for Human Rights (GCHR) is particularly concerned that Loujain Al-Hathloul, a well-known women’s rights defender on social media, is currently the only one held incommunicado as of 20 May. Shortly after her return from attending a review session of Saudi Arabia at the United Nations Convention on the Elimination of all Forms of Discrimination Against Women (CEDAW), Al-Hathloul was arrested by Emirati authorities in Abu Dhabi and brought by the Saudi authorities to Riyadh in early March 2018 for interrogation. She was released after three days and placed under travel ban until her recent arrest from her home on 15 May. She has had no contact with her family, unlike the other detainees. Al-Hathloul was previously detained on 01 December 2014 for 75 days and again in June 2017, for her advocacy on the women’s driving campaign and abolishing the male guardianship campaign.

Among the others arrested are Dr. Eman Al-Nafjan, assistant professor of linguistics, author and a blogger for the Saudiwoman’s Weblog. She has previously protested the driving ban, including publicly driving in Riyadh in 2013, and was harassed and interrogated. GCHR reported her arrest on 18 May.

It has been revealed that among the others arrested are Aziza Al-Yousef, a retired lecturer and a prominent campaigner for the right to drive and to end the male guardianship system who defied the driving ban in Riyadh in 2013 and was previously harassed and interrogated; and three men supporters of women’s rights campaigns; Dr. Ibrahim Al-Modaimeegh, a Harvard-graduate lawyer who supported women’s rights defenders and other human rights defenders in legal representation; Mohammad Al-Rabea, a writer, and a youth cultural activist, and Abdulazia Al-Meshal, a businessman and philanthropist who was listed as a board member in the application for an NGO to protect women survivors of violence, that is still in progress.

Xie Yanyi, who turned 43 this year, is a lawyer in Beijing who has taken on numerous human rights cases over his career. In April 2015 Xie led a small group of rights lawyers seeking restitution after the police shooting of passenger Xu Chunhe (徐纯合) at the Qing’an railway station in Heilongjiang, and later published a legal investigation of the incident. This case is believed to be one of the fuses leading to the 709 (July 9, 2015) mass arrest of lawyers, and Xie Yanyi was one of the scores of lawyers arrested during that crackdown. He was accused of inciting subversion of state power and detained for 553 days, until being released on probationary bail. Last year Xie published  ‘A Record of 709 and 100 Questions About Peaceful Democracy’ (《709纪事与和平民主100问》), in which he described the torture he suffered while in custody. Since his release, he has continued his involvement in human rights cases, representing among other clients the Canadian citizen of Chinese origin and Falun Gong practitioner Sun Qian (孙茜).

The Chinese authorities view rights lawyers as a threat, and following the 709 crackdown, they have been targeting lawyers by canceling their law licenses, prevented them from finding employment, and using a variety of other illegal and extralegal tactics in an attempt to destroy the rights defense community. Xie Yanyi has again become a target. The following is Xie’s account of the Beijing Lawyers’ Association’s hearing on May 16 about his alleged ‘violations,’ a step toward disbarring him. It has been edited for length and clarity with the author’s permission.  — The Editors

How It All Began

In late January 2018, my law firm received a ‘Notice of Case Filing’ (《立案通知书》) from the Beijing Lawyers’ Association (BLA). It said that the Beijing Municipal Justice Bureau had recently received a complaint from the Yinchuan Municipal Intermediate Court and Municipal Procuratorate in Ningxia, accusing me of violating regulations while handling a case in the city. The notice announced that the BLA had begun an investigation.

These are quiet but fretful days for He Weifang, who has spent two decades at the forefront of struggles for the rule of law in China. He may be China’s best known law professor; he is also, in many ways, persona non grata in his country.

Universities where students once thronged to hear his lectures cannot invite him. Newspapers that regularly published his columns and lionized him as a trailblazer cannot mention him. Frustrated by censors, he has mostly given up trying to speak out on China’s internet, where his dormant Weibo social media account still has nearly 1.9 million followers.

“It’s even become hard to publish papers in academic journals,” Mr. He said with a half-bemused shake of his head in a bookstore cafe near Peking University, where he has taught for 23 years. “The past five years have been really, really stifling.”