Azerbaijan/ICJ: Human Rights lawyers Asabali Mustafayev and Nemat Karimli must be allowed to practice their profession

The ICJ today denounced the decision of the Presidium of the Azerbaijan Bar Association, of 23 April 2018, to suspend the licences of two Azerbaijan human rights lawyers Asabali Mustafayev and Nemat Karimli (picture).

The ICJ called on the Presidium to reverse their decision and allow the lawyers to resume their practice.

It stressed that disciplinary proceedings pending against the lawyers should be immediately terminated.

The ICJ said that the decision of the Presidium was contrary to international standards on the role of lawyers including the right to freedom of expression as guaranteed under international law.

The ICJ understands that the proceedings against the two lawyers, initiated following a submission of the Deputy Prosecutor General, were related to the critical statements made by the lawyers in the media, regarding high profile criminal cases.

Nemat Karimli, had stated in media interviews that his client Afgan Mukhtarli, an opposition activist convicted on charges of smuggling, had been illegally and forcibly transferred from Georgia to Azerbaijan and that his life could be at risk if he was returned to Azerbaijan.

The lawyer also complained of excessive searches and being prevented from communicating in private while visiting his client in detention.

The disciplinary proceedings against Asabali Mustafayev relate to allegations he made on social media that the prosecution of politician Gozal Bayramli, on a charge of smuggling, was politically motivated.

Both lawyers were charged with spreading false statements and slanderous information about investigative authorities.

Maldives: Criminal Court suspends lawyer from case, over a tweet

According to the court, Nazim was suspended over a tweet, and has only been suspended from Mahloof’s case.

It accused Nazim of tweeting in manner that ‘misleads’ the public, regarding the parliamentarian’s case, as well as using social media to ‘influence’ the case.

Hence, the court said that Nazim has been suspended from the case, from April 24 onwards.

The case is also over a tweet the parliamentarian had sent out, with the authorities accusing him of ‘giving out false information to a law enforcement agency’.

While he had tweeted in Dhivehi, it translates to “detainees are not dying in Maafushi Prison, they are being killed. They are being killed by without providing the necessary medical attention. When 10 detainees die within a year, it is an issue. Commissioner Shiyan and DOP Salman must take full responsibility. I do not know how many times I received this complaint while I was jailed”. 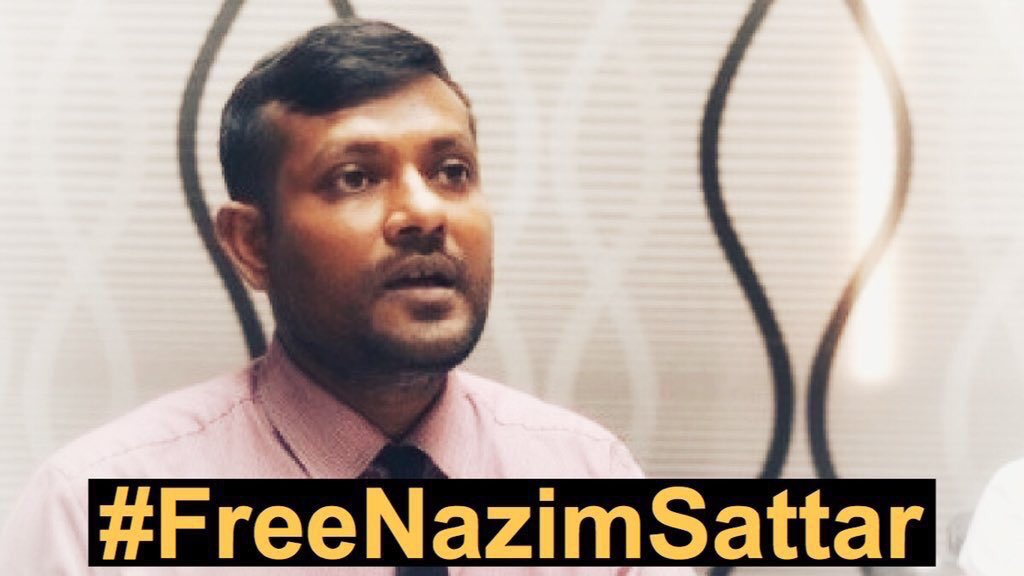 Gregory Hinds and Geraldine Chacón have been arbitrarily detained in custody of the Bolivarian National Intelligence Service (SEBIN) in Caracas, Venezuela, since 31 January and 1 February, respectively. Both were issued a release warrant on 2 April, but the SEBIN refuses to comply with the warrant. They are prisoners of conscience who must be released immediately and unconditionally.

Venezuelan authorities brought Gregory Hinds, 32, to the Bolivarian National Intelligence Service (Servicio Bolivariano de Inteligencia Nacional, SEBIN) facilities for alleged interviews on 31 January. A few hours later, during the night of 1 February SEBIN officials picked up Geraldine Chacón, 24, at her home, and brought her to their facilities under the same argument. Despite there being no arrest warrants against them, both prisoners of conscience have been detained and held incommunicado ever since. Moreover, on 2 April, the competent court issued a release warrant on their names, but the SEBIN has not complied with it, and they both remain arbitrarily deprived of their liberty.

Officers at SEBIN facilities, both at administrative headquarters and at the detention centre, have stated that they do not have orders to comply with Gregory Hinds and Geraldine Chacón’s release warrants. SEBIN officers told relatives and lawyers of both prisoners of conscience that they were unaware of the location of their release warrant, or that the system has been down since early April.

The Philippines: Lawyer behind ICC communication: I fear I’ll be killed anytime

The lawyer who sent an information to the International Criminal Court regarding the Philippines’ bloody war on drugs said that he does not go out often because of his constant fear for his life.

Jude Sabio said he has received numerous death threats since ICC Prosecutor Fatou Bensouda announced in February that her office has started a preliminary examination into President Rodrigo Duterte’s anti-narcotics campaign based on the communications he had filed in April 2017.

“Nowadays I do not go out so much in public places. Specifically, I’m afraid that I’ll be killed at any time. Somebody will be just coming and pump a bullet into my head,” Sabio said in an interview with the National Public Radio, a Washington, DC-based media organization, posted May 5.

Sabio, who is also the legal counsel of self-confessed hitman Edgar Matobato, said he has been living in Manila for more than a year because he would feel more vulnerable should he return to his home in Mindanao.

He noted that he is now being viewed as the “foremost villain in the country” for accusing Duterte and other senior government officials of crimes against humanity but the 51-year-old lawyer has no regrets.

“I’m doing this because this is the right thing to do. And the only way that we can achieve justice against the president is to bring this to the ICC because there is no way that this can be done in the country right now,” Sabio told NPR.