The International Bar Association’s Human Rights Institute (IBAHRI) has launched its 2017 Annual Review, providing an overview of the IBAHRI’s major activities over the year.

2017 was a difficult year for human rights: since the Universal Declaration of Human Rights was adopted 70 years ago, it appears that we are now reaching a point where the universal acceptance of human rights is being eroded. Increasingly polarised political spheres and growing support for populist governments are resulting in policies that scapegoat minorities, attack the under-represented and persecute those who oppose these governments.

In this atmosphere, protection of human rights, the rule of law and an independent legal profession are more important than ever. This makes the work of the IBAHRI more important than ever. Since its establishment in 1995, the IBAHRI has endeavoured to defend fundamental human rights through the promotion and protection of the independence of the legal profession, and by providing members of the global legal community with the tools needed to do the same.

As part of its ongoing projects in the Americas, the IBAHRI provided torture-prevention training to legal professionals, including judges and public defenders, across Brazil and Mexico. In El Salvador, the IBAHRI brought a high-level delegation of experts on the rights to justice, truth and historical memory to meet with legal professionals, the executive, armed forces, CSOs and academia with a view to achieving justice effectively and realising the rights of those who suffered human rights abuses as a result of the 12-year civil war. Additionally, the IBAHRI continued to monitor the emblematic trial of Venezuelan Judge María Lourdes Afiuni, and sent open letters to President Donald Trump of the United States, which criticised the President and his administration for actions the IBAHRI felt were ‘diametrically opposed to the defence of human rights’.

In Asia Pacific, the IBAHRI worked with the newly established Independent Lawyers’ Association of Myanmar to continue its work in the country, and has been running a trial observation programme to ensure those responsible for the death of prominent lawyer U Ko Ni are brought to justice. In Timor-Leste, the IBAHRI has consolidated its presence in the country by seeking to strengthen the legal profession and supporting the creation of its first national bar association.

The IBAHRI launched a mentorship programme for junior Azerbaijani lawyers that linked them with more experienced senior lawyers, and held a Law Student Conference in Baku, among other activities intended to advocate for the rights of legal professionals in the country. We also facilitated attendance at various OSCE Meetings for lawyers in Georgia, Kazakhstan and Tajikistan as part of the IBAHRI’s ongoing work in Europe and Central Asia.

In Tajikistan, reforms undertaken by the Qualifications Committee set up by the Ministry of Justice drastically decreased the number of practising lawyers.

Read more about the situation of Tajik lawyers and the work the IBAHRI has done in partnership with the Tajikistan Barristers’ Union here:https://tinyurl.com/y7rhftx4 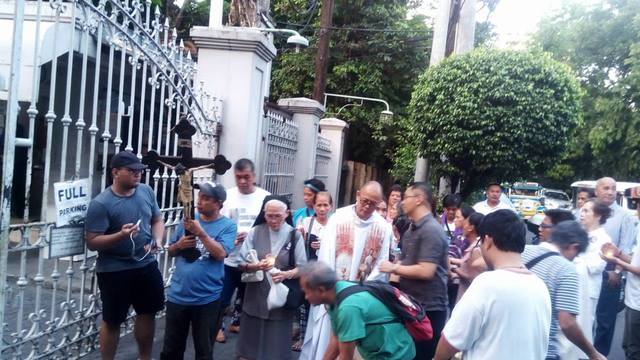 Groups opposing the quo warranto petition against Chief Justice Maria Lourdes Sereno have intensified their protests with the publication of a newspaper manifesto which was also submitted as a signed petition to the Senate and a religious group holding a fast in front of the Supreme Court (SC).

The group sent this manifesto to the Senate also on Wednersday, as it called on senators to “disregard an illegal grant of quo warranto.”

This call assumes that the Supreme Court (SC) will grant the quo warranto and oust Sereno on May 11 the soonest.

Ashish Kumar Dubey, a lawyer practicing in the Garhwa Civil Court, has accused SP Garhwa of assault by the latter’s personal security. The victim’s advocate said that on Monday at around 8:30 in evening, on the instructions of SP Garhwa, his personal guards thrashed Dubey openly on the road and lodged him in police hajat. The victim said that since he is the lawyer in a case against a powerful person of the State, he was attacked.

The district police, on the other hand, issued a press release saying that on Monday evening, there was a traffic jam at Ranka more at around 8:30. The SP was returning from patrolling, calling PCR vehicles and instructing them to free the jam immediately. After reaching his residential office, the SP was informed by the traffic police that a person has been brought to the police station, who was standing in the middle of the road near Ranka more,making video of the vehicles passing around, including women and children. By doing this, the traffic was getting interrupted. He refused to the police personnel to withdraw from the road and make video. He also used abusive words to the police personnel and got entangled with the policemen. Police personnel had to force them to withdraw from the middle of the road and bring the police station.

The president says the government’s attempt to weaken anti-graft laws is “an assault against the justice system.” He will refer the reforms to the Constitutional Court for review, asking that they “take their time.”

Romanian President Klaus Iohannis on Wednesday refused to approve a package of judicial reforms proposed by the government, which the European Commission has said threatens the judiciary’s independence.

Center-right Iohannis said he would be sending the proposed reforms to the Constitutional Court and would seek the opinions of European experts.

Read more: 8 things you need to know about Romania’s culture

The Social Democrats (PSD) used their parliamentary majority to push the three bills in the package through in December despite large street protests across the country and no impact assessment being done.

“These laws do not conform to the national constitutional framework nor to the relevant European standards,” Iohannis said in a televised statement.

“This is why I’ve decided to send them to the Constitutional Court and to refer the matter to the Venice Commission,” he added, referring to an advisory body of the Council of Europe composed of independent experts.

Iohannis said the package would weaken the status of prosecutors, risk obstructing justice and enact structures liable to intimidate magistrates.

The various Anglophone groups in north west and south west need to come together and talk, setting aside their differences over self-declared independence, federalism or self-determination, according to a leading Anglophone lawyer. Nkongho Felix Agbor Balla, who spent 8 months in prison for organising Anglophone protests, has told Spotlight on Africa that infighting between the differing groups needs to stop. The crisis in Anglophone regions has worsened over recent months with allegations of Cameroonian security ransacking towns and villages, while armed separatist groups have continued to carry out reprisal attacks. Some groups support independence and in October 2017 declared Ambazonia as a breakaway state. Spotlight on Africa spoke to Agbor Balla, president of the Fako Lawyers Association and vice president for the central Africa region at the African Bar Association…

What’s the latest on the jailed Anglophone leaders? Those who were transferred from Nigeria.

The latest is that there’s no latest in the sense that we don’t have any information. Nobody has seen them, nobody has spoken to them – their lawyers and family, nobody that I know. I’ve been there with a couple of lawyers twice and we were not allowed to see them.

Why do you think you were released from jail last year?

To be sincere and honest with you, we don’t really know. I don’t know what was the reason that they used in deciding to release myself, Dr [Neba] Fontem, Justice [Paul] Ayah and 51 others.

The Uttar Pradesh government has extended the application of the draconian National Security Act on Bhim Army chief, Chandrashekhar Azad, by another three months. The period for which the NSA applied on Azad was due to expire on May 2. With another three-month extension, the NSA will now be applicable on Azad till August 2.

Lawyers for Azad had filed an application in the Allahabad high court to quash the detention order for him under the NSA. However, on Tuesday, the court rejected the application.

Azad, along with several other leaders of the Bhim Army, was arrested by the UP police in June 2017 and booked under 27 separate cases in relation to the violence that broke out in Saharanpur in May 2017. In November, the Allahabad high court granted bail to Azad noting that the charges were politically motivated. However, a day later, the Uttar Pradesh government booked Azad under the NSA, using which the state can place any citizen under preventive detention without legal recourse.

The Bhim Army is contemplating approaching the Supreme Court against the extension of the NSA. “This is the BJP’s political vendetta. The NSA on Chandrashekhar is totally illegal. The government is only trying to suppress our voice. We will now approach the Supreme Court against this decision,” said Manjit Nautiyal, spokesperson for the Bhim Army.