Yet another 17 judges and prosecutors were suspended over their alleged ties to the Gulen movement, according to media on Friday.

In a statement to media, the Board of Judges and Prosecutors’ (HSK) deputy head Mehmet Yilmaz said 17 judges and prosecutors were suspended over their connections to the movement, which the government blames for the July 15, 2016 failed coup.

The investigators will decide whether the suspended personnel should be completely dismissed from their jobs after they completed their investigations, Yilmaz told media.

At least 4,460 judges and prosecutors have been dismissed since the failed coup in 2016. 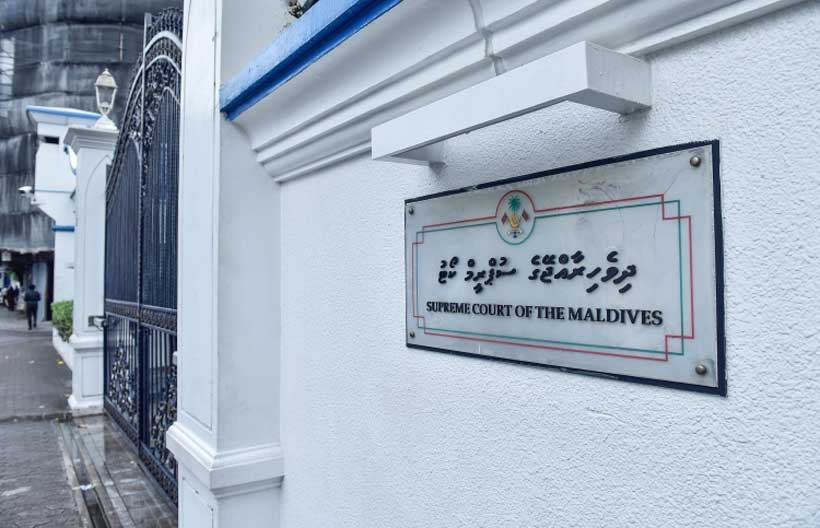 Maldives will seek help from other countries to investigate judges suspected of taking bribes and “hijacking” the Supreme Court to drag the island nation into political crisis, a senior Maldives diplomat told Reuters in an interview.

The tiny Indian Ocean archipelago, best known for its luxury hotels and dive resorts, imposed a 15-day state of emergency on Feb. 5 to annul a ruling from the court ordering the release of nine leading opposition figures.

“That was a direct attempt by the Supreme Court to halt the whole country and go into a deadlock,” said Ahmed Shiaan, Maldives ambassador to the European Union.

He showed Reuters a Maldives police statement which said a bag containing $215,000 and 150,000 rufiyaa ($9,700) belonging to one Supreme Court judge had been found, and that $2.4 million had been separately wired to the judge by a private firm.

Shiaan said that judge, and a second judge on the Supreme Court, had been arrested on suspicion of accepting bribes from former president Maumoon Abdul Gayoom to deliver certain verdicts in his favor. Gayoom himself has been arrested over allegations that he solicited bribes to topple the government.

Jubilee Members of Parliament (MPs) have blasted the Government over disobedience of court orders.

The Jubilee MPs on Friday weighed in on the defiance of court orders especially on the controversial deportation of the firebrand lawyer Miguna Miguna to Canada.

The two legislators were critical of Jubilee’s open defiance of the rule of law despite being sponsored by Jubilee Party.

The Government has, however, filed a notice of appeal to contest Justice Kimaru’s ruling saying the return of Miguna in the country is not in the best interest of the nation.

A group of United Nations experts* has issued a fresh call to the Turkish authorities to release the chair of Amnesty International Turkey, Taner Kiliç, who has been held since June 2017 on terrorism charges.

“We are concerned by the seemingly arbitrary detention of Taner Kiliç, which is evidently linked to his work in defending human rights,” the five experts said in a joint statement released in Geneva.

“We are particularly dismayed that only one day after an Istanbul court had ordered his conditional release, the decision was reversed by another court. We call on the Turkish authorities to immediately release Mr. Kiliç and drop the terrorism charges against him.”

An Istanbul court ordered Mr. Kiliç’s conditional release from pre-trial detention on 31 January 2018, but the prosecutor appealed the ruling and he was re-arrested and moved into Gendarmerie custody the following day and subsequently to a new prison.

The Philippines: ’I fear for my life’: Philippine lawyer behind Duterte probe

Philippine lawyer Jude Sabio felt it was his duty to bring President Rodrigo Duterte’s deadly war on drugs to the attention of international war crimes prosecutors, but now that a probe into the killings is under way, he fears he too has become a target.
Sabio, who describes himself as penniless and on the run, said he had received death threats from Duterte supporters on social media after filing a petition with the Hague-based International Criminal Court in April last year.
“I’m in a state of constant paranoia because I fear for my life,” Sabio, 51, told AFP in an interview. “It could be very possible that a bullet will hit me.”
ICC prosecutor Fatou Bensouda launched a “preliminary examination” after receiving Sabio’s petition, which alleges around 8,000 extrajudicial killings, and this could lead to a full investigation by the court.
Sabio wants the president arrested.

Lawyers in Gilgit on Friday took to the streets against registration of a case against Gilgit-Baltistan Supreme Appellate Court Bar Association President Ehsan Ali Advocate.

The lawyers threatened to expand their protest across the region and boycott court proceedings if their leader was not released forthwith.

Ehsan Ali was arrested on the night between Sunday and Monday from his home in Jutial Gilgit as he was wanted by police in an FIR registered against him on Jan 8 for sharing a post on Facebook which allegedly hurt religious sentiments of people.

On Monday, the Anti-Terrorism Court Judge Raja Shahbaz Khan had sent him on judicial remand till Feb 26.

A large number of lawyers gathered outside of the GB Chief Court building in Gilgit and demonstrated against detention of their leader under ATA.

Egypt/Day of the Endangered Lawyer: SOLIDARITY WITH LAWYERS AT RISK

On the 8th international Day of the Endangered Lawyer, the Bar Council and the Bar Human Rights Committee of England and Wales (BHRC) together with lawyers’ organisations in Europe and around the world, stand in solidarity with those lawyers in Egypt who face persecution in furtherance of the protection of the rule of law. This is also the day to remember lawyers at risk across the world.

For the protection these lawyers afford to others, they are often watched, tracked, falsely prosecuted, deprived of their liberty, or even killed. Each of those instances is a serious threat not only to those lawyers, but to the meaningful protection of the rights they seek to defend.

For 2018, the Day of the Endangered Lawyer is focused on Egypt, in light of widespread credible reports  from human rights organisations that Egyptian authorities are “rapidly taking concrete steps to shut down the last critical voices in the country’s human rights community.”

Since 2013, fundamental human rights, including the right to a fair trial and freedom of expression and assembly, have been diminished on an ongoing basis by broad security legislation. In the last two years, there has been an increase in the number of arrests of lawyers who provide counsel and representation to human rights defenders, many of whom face extended pre-trial detention without a reasoned decision for refusing conditional release. There are widespread reports from international organisations that those in detention are at risk of torture and degrading treatment.

Europe’s top human rights court will be flooded with claims from Turkey unless the country’s judiciary steps up to protect the rule of law, a top European diplomat warned on Friday.

Thorbjørn Jagland, head of the Council of Europe, travelled to Ankara to urge judges and prosecutors to stand up for fundamental freedoms following President Recep Tayyip Erdogan’s sweeping crackdown on dissent.

Mr Jagland encouraged the Turkish judiciary to “hold firm” to the principles of democracy and warned that failure to do so would cast Turkey’s commitment to the European Convention on Human Rights into doubt. “Overloading the court will only raise the question of Turkey’s capacity or willingness to uphold the convention,” he said. “This simply will not work.”

The warning from Europe’s human rights watchdog underlines the concern in western capitals over the rule of law in Turkey under the leadership of Mr Erdogan. Although the Council of Europe is separate from the EU, its work is followed closely by EU member states.

Turkey is a member of the council and, in principle, must abide by decisions made by its most important body, the Strasbourg-based European Court of Human Rights. But the fallout from the attempted coup of July 2016 has threatened to put Turkey and the court on a collision course.

Mr Jagland’s visit came just weeks after Turkey was plunged into a judicial crisis when an order by the country’s top court was overruled by a series of less senior judges.

Senate Judiciary Committee Republicans ended a century-old tradition Thursday that will accelerate the appointment of right-wing federal judges in purple and blue states, where they will preside over thousands of cases that will never reach the Supreme Court.

The move, led by Senate Judiciary Committee Chairman Charles Grassley of Iowa, was the most egregious partisan intervention in the judiciary since Republican Majority Leader Mitch McConnell blocked 2016 hearings on President Obama’s final Supreme Court nominee, Merrick Garland, which would have given the court a center-left majority. (After the 2016 election, conservative Neil Gorsuch was appointed and confirmed.)

“Michael Brennan gets voted out of Senate Judiciary Committee along party lines despite fact that he refused to acknowledge implicit racial bias in the justice system,” tweeted Vanita Gupta, president and CEO of the Leadership Conference on Civil and Human Rights, and former head of the Justice Department’s Civil Rights Division under President Obama. “Grassley kills the blue slip tradition with this vote. Brennan voted out over objection of a home-state senator.” Attorney Mohammad Najafi has been held in detention in the Iranian city of Arak since January 15, and is facing eight charges for exposing the death of a young man who died in police custody after being arrested during the recent protests in Iran.

Najafi’s own attorney has also been threatened with arrest, the Center for Human Rights in Iran (CHRI) has learned.

“The Iranian authorities should immediately release Najafi and end the practice of intimidating and persecuting lawyers for exposing human rights violations inside the country,” said CHRI’s Executive Director Hadi Ghaemi.

“There’s no justice in a system where lawyers are put in jail for doing their jobs,” he added.

Najafi was due to be released on February 14 but the month-long detention order against him was extended, according to his lawyer, Payam Derafshan.

Human rights lawyer Mohammad Najafi has been repeatedly detained in Iran for taking on cases involving politically motivated charges against Iranians. Now he's facing years in prison after publicly stating that his client was killed in police custody. https://t.co/24AR5LoTJj pic.twitter.com/XDxf1spkSN