Egypt/Day of the Endangered Lawyer: SCC honorary chairman appointed to CRCICA board

One aspect of the changing market for legal services relates to relations between government and civil society groups and lawyers, showing.  Egypt is not without its problems, particularly for lawyers practicing in Egypt.

Some Egyptian lawyers have been denied the rights to a fair trial and freedom of expression and assembly because of broad security legislation passed since 2013, as well as facing travel bans and prosecution for carrying out their professional duties, in support of human rights.

On 24 January 2018, the International Day of the Endangered Lawyer, which focuses on the rule of law issues in the legal profession internationally, was dedicated to Egypt. The American Bar Association (ABA) and both the English and Welsh legal representative bodies, as well as a consortium of international lawyers, spoke out, calling for the role of lawyers and the rule of law to be respected in the country.

In a statement released local time, ABA president Hillary Bass said that lawyers should be able “to work without intimidation, harassment or improper interference and to ensure that they are adequately safeguarded when their security is threatened”, citing United Nations principles justifying such protection. Those taking comfort from Franke’s appointment will hope that Egypt addresses those concerns, as well as promoting its ability to resolve those of investors.

A group of lawyers staged a protestdemonstration here on Friday condemning the armed attack on an Additional District and Session Judge in Khairpur district the other day.

The lawyers including advocate Sajjad Ahmed Chandio, Aslam Laghari, Geet Kumar and others while condemning the incident demanded immediate arrest of the attackers and exposing the cause of the attack.

They expressed solidarity with the judge Ghulam AliKanasro and lamented that the police could still not arrest the culprits.Chandio informed that some armed assailants attacked the residence of Kanasro in Sobho Dero and escaped.

India has urged the UN to send a fact-finding mission to Maldives and impressed countries to ask their judiciaries to support chief justice of the Maldives supreme court who has been imprisoned by the President following the order to release Opposition leaders.

The United Nations Security Council had held a meeting on Thursday to discuss the current political crisis in Maldives. Ahead of the meeting, UN Assistant Secretary, General Miroslav Jenca, reported to have informed the co ..

Officials in New Delhi indicated that India has also approached various countries to direct respective judiciaries to support chief justice of Maldives in this hour of crisis. There are reports that the chief justice is under duress and is being tortured in prison. India is also advising various other countries who have not used travel advisories to issue such to pressure the Yameen government with tourism being the mainstay of the Maldivian economy. 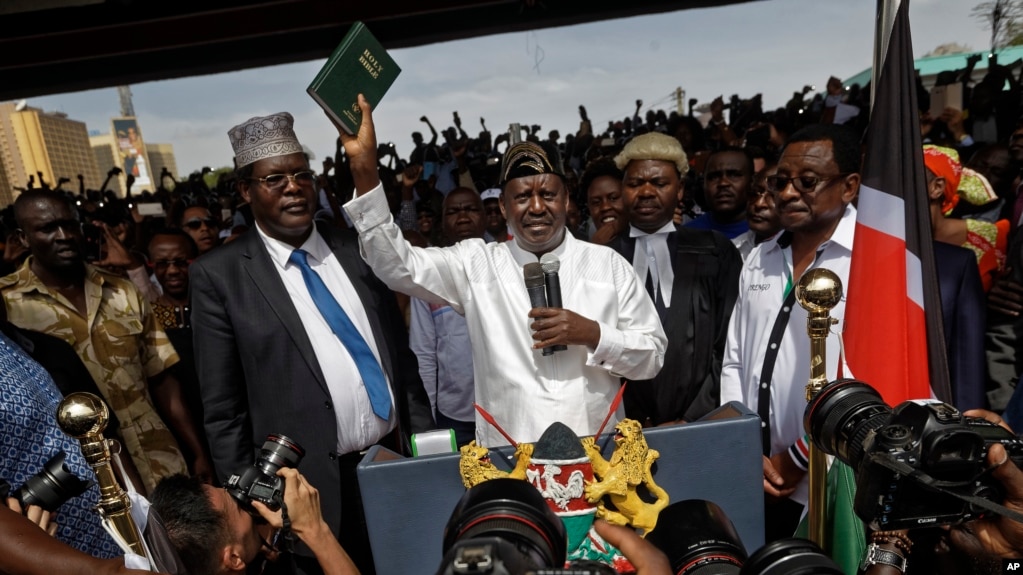 A Kenyan attorney deported to Canada this week on charges of treason is challenging his removal in court, seeking a return to the African nation while insisting that its rightful leader is opposition figure Raila Odinga and not President Uhuru Kenyatta.

Miguna Miguna, who holds dual citizenship in Kenya and Canada, was sent to Toronto on Tuesday after participating in a mock presidential swearing-in ceremony for Odinga in Nairobi on January 30. Miguna also is one of Odinga’s attorneys.

“Today, my lawyers filed a petition seeking to invalidate the whimsical, illegal decision” to deport, Miguna said in a phone interview Friday with VOA’s Swahili service. He spoke from his home in a Toronto suburb.

Miguna was arrested last Friday at his home in Runda. On Tuesday, Kenyan authorities forced Miguna onto a late-night KLM flight from Nairobi to Toronto via Amsterdam. His removal flouted a Kenyan high court’s order that Miguna be presented to a Nairobi judge on Wednesday, five days after his arrest.

In China, the authorities go to great lengths to control civil society, even resorting to forced disappearances. Since President Xi Jinping came to power in 2013, political opponents have gone missing every month. Sometimes without any form of judicial process, they are sent to secret prisons where they remain locked up for months or even years, without anyone ever finding out what happened to them. FRANCE 24 investigates China’s forced disappearances.

On July 9, 2015, nearly 300 lawyers and human rights activists were arrested, interrogated and imprisoned in China. Some ended up in “black jails”: untraceable places, completely cut off from the outside world, where they were detained in secret.

This massive purge, targeting all those who denounced and challenged the authoritarian excesses of the Chinese Communist Party, was called the “709 incident”. According to some experts, it was Beijing’s worst crackdown on civil society since the Tiananmen Square massacre on June 4, 1989.

Since then, some of the “709 incident” activists have been released, but other dissidents have faced the ire of the Chinese authorities, sometimes even beyond its borders.

After a three-month investigation, several victims of these purges, family members of those missing and some of the few remaining pro-democracy activists in China agreed to speak to us on camera. They recounted the abductions, harassment and torture that they have been subjected to.

FRANCE 24 brings you the harrowing story of the missing people and activists that Xi Jinping’s China is so keen to silence.

Gao Zhisheng is one of China’s most respected human rights lawyers who has been subjected to enforced disappearance, torture, illegal house arrest and detention over the years.

The ‘bar association’ in the north condemned threats made against a judge in the case of six people facing charges in connection with demonstrations outside the Turkish Cypriot newspaper Afrika.

According to media reports from the north on Friday, a team of lawyers and the head of the ‘bar association’ Unver Bedevi stood outside court saying justice should be allowed to run its course.

“We will not remain silent against these attacks on institutions and those who represent them,” he was quoted as saying by the Cyprus News Agency.

“Those who incite separation and violence in the country, instead of learning from the serious consequences of their actions and apologising to society, have the nerve to threaten the judge and attack lawyers.”

Bedevi and other lawyers also lambasted comments by Rebirth party ‘MP’ Erhan Arikli who said the court’s decision was a message to Turkey’s President Tayyip Erdogan and all the ‘fellow refugees’ referring to Turkish settlers.

The Cyprus News Agency said that in a post on his Facebook account, Arikli questioned why there was such an uproar over the six suspects and a demand for a harsh sentence against them while in the past, similar actions were punished with far lighter sentences.

Coming to his own conclusion, he said it was due to the fact that the six were ‘fellow refugees’ as opposed to similar cases where they were of Cypriot origin.

Harsh sentences would be a message towards Erdogan and Turkish people that live in the north and don’t know their limits, he added.

The Philippines: Carandang’s accuser barred from law practice for 2 years

The lawyer who brought the complaint that led to Malacañang’s suspension of Overall Deputy Ombudsman Melchor Arthur Carandang has been barred by the Supreme Court from practicing his profession for two years for unethical conduct.

His misdeed? Endlessly blocking the enforcement of a lower court’s ruling arising from his failure to settle a P34,000 loan he took out from the Government Service and Insurance System (GSIS) 50 years ago.

The high court said Eligio Mallari violated the lawyer’s oath by resorting to “dilatory moves” in preventing the GSIS from foreclosing two parcels of lands which he used as mortgage for a loan he got in 1968.

The suspension order was meted out on Mallari on Jan. 10 but was made public only on Friday.

Leaders of several small political parties have decided to start from scratch and form new ones to evade regulations requiring updated party membership information, which are seen as excessive and burdensome.

Under new rules, existing parties can begin their member registration process on April 1. The members are required to produce letters confirming their membership and pay party fees within 30 days of April 1 or lose their membership status.

The regulations, however, are seen as favourable to new political parties which have a month’s headstart. The registration process for new parties starts on March 1 and ends on March 31.

In a separate development, the Democracy Restoration Group and the Start Up People group were set to gather at the Democracy Monument at 4pm today.

Mr Arnon yesterday said he would be at today’s rally to demand an election.