Iran: She refused to wear a hijab in prison. Now Nasrin Sotoudeh is defending women as they remove their headscarves across Iran

From her cell inside Tehran’s Evin prison, Nasrin Sotoudeh took a small stand against the Iranian regime that jailed her: she refused to wear a hijab.

It was 2010 and the prominent human rights lawyer, known for defending dissidents and opposition figures, was under arrest on charges of spreading propaganda and endangering national security.

Guards would come to her, sometimes pleading and sometimes threatening, to try to make her put on a prison-issue chador, a full length garment that leaves only a woman’s face uncovered. She resisted, even when authorities extended her sentence for bad behaviour.

Nearly a decade later, Ms Sotoudeh is fighting a new and larger battle as she represents young women arrested for taking off their headscarves in public to protest against laws that force them to wear a hijab.

“I myself tolerated a lot of hardship by refusing to wear hijab inside prison,”…

At least 572 lawyers have been put in pretrial arrest while 80 of them were sentenced to varying years in prison across Turkey since the summer of 2016, a recent report said.

The Arrested Lawyers Initiative released its 24-page report, “The Rights to Defense and Fair Trial Under Turkey’s Emergency Rule” on Feb 1.

“There has been a relentless campaign of arrests which has targeted fellow lawyers across the country. In 77 of Turkey’s 81 provinces, lawyers have been detained and arrested on trumped-up charges as part of criminal investigations orchestrated by the political authorities and conducted by provincial public prosecutors,” the report said.

The Arrested Lawyers Initiative, according to its online bio, is a group of Turkish lawyers who are forced to live in exile after the government mass crackdown on human rights defenders and lawyers across Turkey. A defense lawyer for the accused gunman in the shooting death of prominent Muslim lawyer U Ko Ni said his client was blackmailed into carrying out the murder and didn’t know the mastermind behind the assassination.

U Kyaw Kyaw Htike, a defense lawyer for accused gunman Kyi Lin, told the media after a hearing at Yangon’s Northern District Court on Friday that an individual named Myint Swe had threatened his client with harm if he did not kill U Ko Ni, the late legal adviser to the ruling National League for Democracy.

“If he didn’t do it, who would take responsibility for his and his family’s survival?” U Kyaw Kyaw Htike asked, adding that Kyi Lin had never met U Ko Ni before the incident and had no personal motive for murdering him.

U Ko Ni was gunned down outside Yangon International Airport on Jan. 29 last year. Taxi driver U Nay Win was also fatally shot as he tried to apprehend the assassin.

At Friday’s hearing, prosecutors presented judges with their closing arguments, capping 10 months of witness testimony in the murder trial of the four accused. 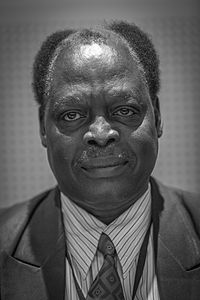 Opposition parties reported that more than 40 people were or remain detained against the backdrop of a large demonstration in Khartoum North on Wednesday. Another leading opposition member has been placed under arrest.

Groups of the opposition, civil society, youth and women planned a peaceful march against the soaring prices of food and medicines in Sudan at El Shaabi Square in Khartoum North on Wednesday. Police in riot gear and columns of vehicles blocked the perimeter of El Shaabi Square and confronted protesters in the surrounding streets using tear gas and vehicle charges.

Yesterday, the National Intelligence and Security Service (NISS) arrested Maj.-Gen. Fadlallah Burma Nasir, the co-vice-president of the National Umma Party, from his house in Khartoum. Lawyer and human rights defender Saleh Mahmoud, a member of the the Communist Party, was arrested in his office in Khartoum.

Natasa Kandic, who founded a nonprofit to document human rights violations amid the breakup of the former Yugoslavia, has been nominated for the 2018 Nobel Peace Prize by two U.S. lawmakers.

Senator Roger Wicker, a Mississippi Republican who is chairman of the Helsinki Commission, an independent government agency that promotes human rights, military security, and economic cooperation, and Representative Eliot Engel, a New York Democrat who is the ranking member of the House Committee on Foreign Affairs, nominated Kandic, of the Belgrade-based Humanitarian Law Center.

Kandic, who founded the nonprofit in 1992, has won numerous international accolades for her humanitarian work.

“As members of the U.S. Congress, we helped shape the international response to the conflicts, which erupted in the Western Balkans, and we continue to support and encourage post-conflict recovery in the countries of the region,” read the nomination letter, jointly drafted by the legislators and submitted to the Norway-based awards organization Wednesday.

“This recognition would further the cause of peace and reconciliation in this and other troubled regions of our world,” they said.

Trained as a lawyer, Kandic has been widely credited with furnishing to U.N. war crimes tribunal officials in The Hague critical evidence on Serbia’s role in the 1995 Srebrenica massacre of Bosnian Muslim men and boys.

UN Watch, a Geneva-based monitoring group, condemned Venezuela for arresting an 85-year-old activist in the middle of last night, taken from his home in Caracas at 3:00 a.m. by security forces.

Agents of the Sebin intelligence service have detained Enrique Aristeguieta Gramcko, an eminent lawyer, historian, and former politician who is active in two groups that have criticized the repressive Maduro regime. He is the president of the Great National Alliance (GANA), and a board member of Soy Venezuela.

“Venezuela’s arbitrary detention of Mr. Aristeguieta Gramcko is a breach of due process, and violates the government’s basic obligations as a member of the UN Human Rights Council,” said Hillel Neuer, executive director of UN Watch.

“We demand the immediate release of Mr. Aristeguieta Gramcko and all other political prisoners, and we call on UN Secretary General Antonio Guterres and High Commissioner for Human Rights Zeid Ra’ad Al Hussein to speak out immediately to demand his freedom. We continue to demand an urgent session of the UNHRC to address ongoing gross and systematic abuses by Venezuela’s Maduro regime.”

Mr. Aristeguieta Gramcko played a crucial role in the birth of Venezuelan democracy. He was a member of the Junta Patriotica, a congressman, ambassador to the Caribbean, deputy minister of home affairs, governor of the Nueva Esparta state, and president of the Supreme Electoral Council.

He is a widely-respected figure in Venezuelan society, revered over many years for his tireless defense of political and civil liberties and democracy in Venezuela.

There is currently no information about his whereabouts.