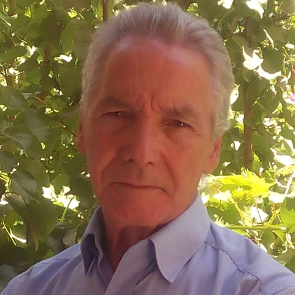 Human rights lawyer Ahmine Noureddine is facing charges of “false communication” and “insulting a regulatory body” after filing a torture complaint against the police for the brutal beating of an individual resulting in their death in 2015.

In June 2015, violent clashes between the Amazigh Ibadi and the Maliki sect in Ghardaïa district south of Algiers resulted in the death of 48 people. Ahmine Noureddine filed a complaint against the security forces with Al-Agwat District Prosecution on behalf of the brother of an individual who was killed as a result of severe beatings by the security forces after they intervened in the clashes.

As a result of pressure by authorities, the complainant, the brother of the deceased, retracted the complaint and falsely stated that he had not asked Ahmine Noureddine to file the complaint on his behalf. He further stated that his brother was attacked by an unknown assailant.

In November 2017, Ahmine Noureddine was charged with “false communication” and “insulting a regulatory body” (the police) by the prosecution of the Ghardaïa court (case number 17/02569).

A hearing for the case of the human rights defender has been set for 5 February 2018 in the Ghardaïa District Court.

Front Line Defenders condemns the judicial harassment of human rights lawyer Ahmine Noureddine as it believes that it is solely motivated by his legitimate and peaceful work in defence of human rights;

Egypt/Day of the Endangered Lawyer: Egypt’s lawyers must be supported

Concerns over the rule of law in Egypt unite lawyers in calling for the independence of the legal profession to be respected, as human rights compliance takes on an increasing business dimension.

Both the Law Society and the Bar Council of England & Wales have issued calls for the right to lawyers in Egypt to practice independently to be respected, in marking the International Day of the Endangered Lawyer, on 24 January 2018, which focuses on rule of law issues as they affect the legal profession internationally. This year, the day has been dedicated to Egypt.

Following civil unrest in Egypt, after the deposition of former leader, Hosni Mubarak, in 2011, and the subsequent election – and then removal – of Mohammed Morsi as president of Egypt in 2013, the country has been ruled by former general, Abdel Fatah al-Sisi, who is seeking re-election as president this year.

Sisi’s term of office has seen a focus on encouraging investment in Egypt, accompanied with the support of a USD 12 billion loan from the International Monetary Fund (IMF), granted in 2016, alongside strict security measures, in part to crack down on terrorist attacks from Egypt’s restless Sinai province, and continuing jihadist violence from opponents of his regime.

More than one million people from 194 countries have demanded the release of Amnesty International’s Turkey Chair, Taner Kılıç and the dropping of charges against him and 10 other human rights defenders as their trial resumes in Istanbul on January 31.

The 11 face trumped up “terrorism” charges in what can only be described as a politically motivated prosecution aimed at silencing critical voices within Turkey. If convicted they could face jail terms of up to 15 years.

“With overwhelming evidence of his innocence and none of any wrongdoing Taner’s release is long overdue. The fact that he has spent almost eight months behind bars speaks volumes about Turkey’s flawed justice system and the government’s ruthless pursuit of those who stand up for human rights,” said Gauri van Gulik, Amnesty International’s Director for Europe.

“Today’s hearing offers yet another opportunity to end this glaring miscarriage of justice allowing this principled and passionate human rights defender to return to his family and resume his vital work. The court must acquit Taner and the other 10 human rights defenders and end this farce once and for all.”

Amnesty International’s Turkey Chair, Taner Kılıç, was detained on June 6, 2017 and sent to jail three days later, where he has been ever since. Ten other activists, including İdil Eser, the Director of Amnesty International Turkey, were detained a month later. Eight of them were held for almost four months before being released on bail at their first hearing in October.

They are all accused of “membership of a terrorist organization”, a baseless allegation for which the prosecution has yet to provide any concrete evidence that would stand up to scrutiny. 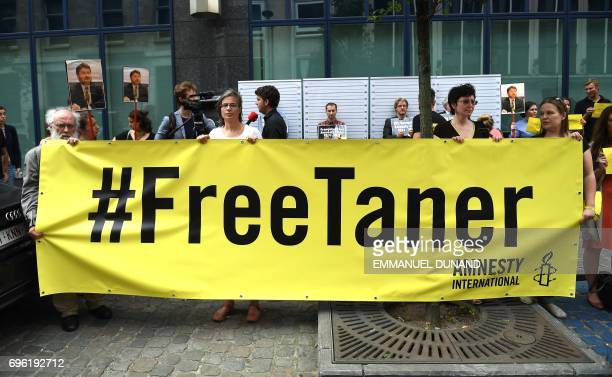 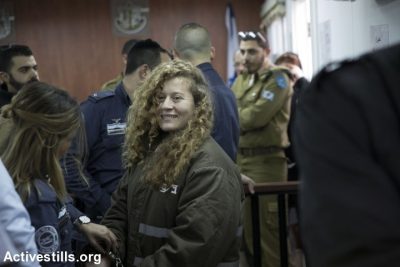 French academics and writers published a collective letter in Le Monde on 23 January, focusing on the case of Ahed Tamimi and the plight of the approximately 360 Palestinian child prisoners in Israeli prisons. The letter also highlights the case of Salah Hamouri, the French-Palestinian lawyer jailed without charge or trial under administrative detention. Public officials and municipalities across the country have adopted declarations demanding Hamouri’s release and even the French government has acceded to the popular call to demand his freedom.

The statement follows below.

We call for the support and intervention of the President to stop the detention of Palestinian children in Israeli prisons. We especially wish to draw attention to the case of Ahed Tamimi, pursued by the Israeli government. Last 15 December, Mohammed Tamimi, 15, was hit in the head by a rubber-coated metal bullet fired at close range by soldiers of the Israeli occupation army. The boy was in critical condition and his cousin Ahed Tamimi, age 16, was visibly upset by the announcement of his condition and the severity of his injuries.

The UNICEF report of 2013, “Children in Israeli military detention,” concludes: “The abuse of children in contact with the military detention system appears to be widespread, systemic and institutionalized throughout the process, from the time of arrest through the prosecution of the child, their potential conviction and the application of a penalty.”

We urge President Emmanuel Macron to take action urgently to contact the Israeli authorities to finally end their detention practices that violate children’s rights, human rights and international law. We also remind him that, to date, our compatriot Salah Hamouri also remains in Israeli jails, a victim of the same unfair framework of “administrative detention.” France must ask so that Ahed Tamimi and other Palestinian child prisoners come home as soon as possible. We cannot look away while children and one of our compatriots are illegally detained far from their families.

Turkey: Report: The Right to Defence Under Turkey’s State of Emergency Rule

The Arrested Lawyers initiative published a report as to the relentless crackdown against Turkish lawyers and the right to defence in Turkey. To read and download to report click here

The report says, under the state of emergency rule, serious interventions has been made to the right to defence:

Report: The Right to Defence Under Turkey’s State of Emergency Rule

Lawyers for Lawyers and Lawyers’ Rights Watch Canada write to express their concern about the termination of investigation of the maltreatement of Mr. Alldo Fellix Januardy (Pretrial Case Number 04/Pid.Prap/2018/PN.JKT.SEL). Alldo Fellix Januardy is an independent public interest lawyer at the Legal Aid Institute (LBH) in Jakarta. LBH provides legal aid to the poor and marginalized people in Indonesia, including people in slum areas in Jakarta who face forced eviction by the government.