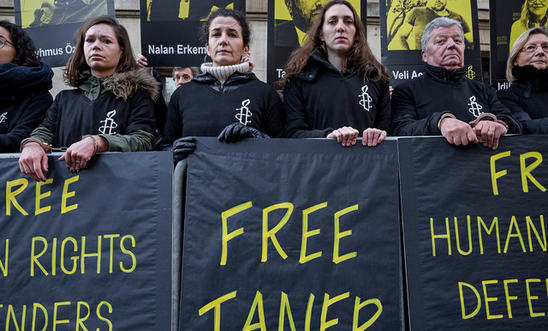 Taner Kılıç, Amnesty’s Turkey chair, and İdil Eser, the organisation’s Turkey director, are being tried along with nine other people on allegations of “membership of a terrorist organisation”.

Mr Kılıç was detained last June and has been in custody ever since, while Ms Eser was arrested a month later but released on bail – along with several others – at her first court hearing in October.

If convicted the 11 accused could face jail terms of up to 15 years. Amnesty has denounced the proceedings as “politically-motivated”.

A campaigner sentenced in her absence to five years in prison for activities on behalf of human rights groups in Egypt has urged foreign lawyers to continue to protest at the detention of colleagues by Egyptian authorities. ’When a statement comes out it makes a huge difference,’ said Dr Nancy Okail, saying that the Cairo government was anxious to preserve good relations with the West.

Okail, now executive director of the Tahrir Institute for Middle East Policy, Washington DC, was speaking at a Law Society event to mark the international day of the endangered lawyer – the day after president Abdel Fattah al-Sisi emerged as the sole candidate in the March presidential election. As a result, Egypt is moving towards ’flat out dictatorship’, Okail said.

She said that civil society organisations, and lawyers trying to defend them, bear the brunt of ’unprecedented levels’ of forced disappearances, torture deaths and pre-trial detentions. In December last year alone, 221 people were ’forceably disappeared’, she said.

Lawyers have been detained, had their assets frozen and been barred from travel. ’The current emergency law, which was renewed earlier this month, makes the situation even more threatening, and human rights lawyers, who are in the forefront of this battle, are themselves subject to repressive measures, she said.

Okail was tried in absentia in Egypt in 2013 and convicted to five years imprisonment in proceedings in which 43 workers with non governmental organisations were charged with using foreign funds to foment unrest – a charge she denies. Her defence lawyer,  Negad ElBorei, is now a defendant himself and is currently banned from traveling, she said. ‘Supporting those lawyers is absolutely necessary especially under these conditions.’

We are marking the day of the endangered lawyer with a panel discussion on Egypt with our VP @Blacklawslaw ,Nancy Okail & Prof Lynn Welchman pic.twitter.com/HXoMOhjrBO

Saudi Arabia/Iran/Syria: MENA: Participants at Gulf and Neighbouring Platform call for immediate release of all detained human rights defenders in the Middle East

On 22 January 2018, partners of the Gulf Centre for Human Rights (GCHR) called for the release of all detained human rights defenders in the Middle East. At the event, hosted in Beirut by GCHR and Media Association for Peace (MAP), human rights defenders were joined by Michel Forst, United Nations Special Rapporteur on the situation of Human Rights Defenders, and representatives of Front Line Defenders, FIDH, CIVICUS and Amnesty International to make the public call to free their colleagues.

Host Khalid Ibrahim, GCHR’s Executive Director, mentioned some of the many human rights defenders jailed across the region, including GCHR’s two co-founders Abdulhadi Al-Khawaja and Nabeel Rajab in Bahrain, and GCHR Advisory Board member Ahmed Mansoor, jailed in the United Arab Emirates since March 2017. He noted that just as GCHR was being founded, Al-Khawaja was arrested, tortured and jailed in April 2011. He’s serving a life sentence for his peaceful human rights activities. Rajab is also serving a two-year sentence and facing up to 15 years in another trial on 21 February.

Ibrahim also noted other cases from the Gulf region and neighbouring countries, including in Syria of Razan Zaitouneh, Samira Al-Khail, Wa’el Hamadeh, Nazem Hammadi, Khalil Ma’touq and Mohamed Thatha. He mentioned some of the many dozens of human rights defenders jailed in Saudi Arabia, including Dr. Mohammed Al-Qahtani, Issa Al-Nukheifi, Essam Koshak, Walid Abu Al-Khair and Raif Badawi. In Oman, Internet activist Hassan Al-Basham is in jail, and in Kuwait, Sulaiman Bin Jassim was sentenced to seven years. In Iran, there are also many human rights defenders serving long sentences such as Narges Mohammadi, Atena Daemi and Dr. Abdolfattah Soltani. There are many others in Bahrain including Dr. Abduljalil Al-Singace.

Oyub Titiev, the head of the Chechen branch of Memorial, a Russian human rights center, was not brought to the Supreme Court session that was to consider the lawyers’ objection to his arrest, Titiev’s lawyer Petr Zaikin told Mediazona.

The Human Rights Center posted on Telegram that another Titiev’s lawyer did not show up in court either. Zaikin said that last time he had talked to him was the day before, when the missing lawyer was going to the Investigative Committee. He has not been returning calls since then and Zaikin says he has no idea where the other lawyer might be.

Due to the fact that Titiev was not present at the session, the Supreme Court postponed it until 17:00, and Zaikin headed to the Kurchaloyevsky Internal Affairs Office, hoping to find his client there. He was told that Titiev was not there, and that an investigative procedure was scheduled for 16:00, of which Zaikin had not been notified. The lawyer called the investigator, who said he had canceled the investigative procedure, and did not know where Titiev was.

The human rights activist was detained in Chechnya on 9 January. The police found a plastic bag with marijuana in his car. Two days later, Shali city court detained Titiev for two months on charges of Drug Possession (part 2 of Art. 228 of the Criminal Code). Titiev denies any wrongdoing and insists that the police had planted the drugs on him during the search.

Australia: Death threats, kidnapping and murder: The cost of being a criminal lawyer

DISGRUNTLED criminals can dole out their own rough justice and slain Sydney solicitor Ho Ledinh may prove to be a case in point.

The murder of the Bankstown criminal lawyer last week has highlighted the risks attached to a profession that sees suited members of legal fraternity rubbing shoulders with hardened thugs.

Leading lawyers who count Sydney’s most high-profile organised criminals among their clientele have recounted tales of being intimidated by bikies, badmouthed by terrorists, threatened with a kneecapping and even targeted in a botched kidnapping.

In the late 90s, as Mr Galloway tells, it, he sent Ibrahim, who hadn’t coughed up his legal fees, a letter telling him he wouldn’t act for him anymore.

According to his pro bono lawyer, Vahid Heydari, the 22-year-old who died at the 12th Police Station in Arak after being arresteD for allegedly selling drugs early this year, the authorities are trying to cover up the real reason for his death by claiming he committed suicide. Mohammad Najafi told the Center for Human Rights in Iran (CHRI), “This young man was a protester. They arrested him and then they beat and killed him. Now they want to destroy his reputation.”

An outspoken Iranian reformist MP has accused the Islamic Republic’s security forces of framing the lawyer. MP Mahmoud Sadeghi tweeted on January 25th that Najafi “has proved that his young client was never involved in any drug dealing.” Although he didn’t mention Najafi by name, Sadeghi went on to tweet, “through field investigation at the village residence of a young man who died in custody and at a police station in the city of Arak, an honorable attorney has proved that none [of the villagers] believes the young man was dealing drugs.”

Ali Bagheri, a human rights activist based near Arak, said in an interview that Heydari’s family have been threatened by security forces and told to remain silent about his suspicious death. They were told he was arrested for distributing narcotics and that his case could have “complications” for the family.

“Vahid Heydari was a vendor at Arak’s main bazaar. Protests in Arak flared up on December 31 and Vahid was detained on January 1,” Bagheri said.“The security forces dragged him to the 12th Precinct…on January 5, they informed his family that he had committed suicide and died behind bars.”

Bagheri says he spoke with Heydari’s uncle and cousin, who alleged that when their relative’s body was released to them there appeared to be a 10-centimeter swollen wound on his left temple.

Hours after the interview, Bagheri was also detained by the security forces.

Attacks on Northern Ireland solicitors and law officers in press and parliament have led to harassment and credible death threats against lawyers, the Gazette has been told. As the legal profession worldwide marks the ‘Day of the Endangered Lawyer’, alleged UK government indifference has attracted international criticism.

Highly personalised attacks on lawyers involved in ‘legacy’ cases from the Troubles, through inquests, civil actions or prosecutions, have been made in the Daily Mail and the Sun. The Sun has named and photographed a number of solicitors and their offices and published details of the value and rough location of family homes. A piece in the The Sunday Times’ Dublin edition labelled lawyers the ‘legal auxiliaries’ of the Sinn Fein-IRA ‘family’.

Pádraig Ó Muirigh, director of Belfast human rights firm O’Muirigh Solicitors, was told by police to review his personal security three years ago, as his movements were being monitored. Others, including solicitors from Belfast firm KRW, report death threats and abuse on the streets and online following press coverage. ‘It’s become more difficult in recent times,’ he added.

A strongly-worded letter on the subject sent last summer to the Prime Minister and to then-Northern Ireland Secretary James Brokenshire by the president of the 24,000-member New York City Bar, John Kiernan, has been seen by the Gazette. Kiernan expressed ‘a series of concerns surrounding the recent climate of intimidation that has been re-emerging for lawyers in Northern Ireland’.

On the #DayOfTheEndangeredLawyer, we stand in solidarity with all lawyers across the globe who are being subject to threats and harassment for simply exercising their profession.

In 2018 the focus is on lawyers in #Egypt, who have to live with constant surveillance, smear campaigns and intimidation from state-affiliated media and authorities.

We encourage everyone today to show your support and join the demonstrations outside of your local Egyptian embassies, or attend one of the many interesting events!

#WeAreAllHumanRightsDefenders — Standing up for lawyers!

The apex court has directed the listing of the case for February 2, when the hearing would be tested on the standard of objectivity that the bench has set for itself.

The hearing of the case related to the death of judge B.H. Loya before the chief justice-led bench in the Supreme Court began on Monday, marked by an acrimonious exchange between the counsel and judges on questions of propriety, objectivity and the freedom of the media to report sub judice matters. This was hardly surprising given the huge stakes involved in the efforts to unravel the mystery over the death of Judge Loya.

Although there are two petitioners before the Supreme Court seeking an independent probe into the “mysterious” death of Loya on December 1, 2014, it was the two counsel for the interveners, Dushyant Dave and Indira Jaising, who appeared to have set the agenda of the hearing on Monday.

Was Loya’s death mysterious? As of now, it is a natural death, observed Justice D.Y. Chandrachud, one of the three judges on the bench. Dave agreed, but added he only wished it was, as there are several pointers that suggest the contrary. Although Dave sought to list a few such suspicions about the theory of natural death, the bench considered it premature to discuss their merits in the absence of a complete record of documents.