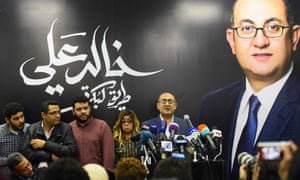 Egypt’s last main opposition candidate in an upcoming presidential election announced he was halting his campaign and withdrawing from the race on Wednesday, saying conditions did not allow for a fair contest.

“We today announce our decision not to enter this race, and will not present our candidacy papers,” the candidate, rights lawyer Khaled Ali, said at a news conference in Cairo.

“There has been stubbornness by the electoral commission and many violations against the other candidate,” he said, referring to Anan.

Candidates challenging Sisi have described sweeping efforts to kill off their campaigns before they begin, with media attacks, intimidation of supporters, and a nomination process stacked in favour of Sisi, himself a former general.

The 45-year-old Ali rose to national prominence last year when he won a case that nullified an unpopular government transfer of two Red Sea islands to Saudi Arabia, a deal that had prompted rare mass protests.