A rights lawyer who hopes to run in Egypt’s presidential election in March said Wednesday that bureaucrats loyal to the government were obstructing efforts to get him on the ballot, while his campaign officials said police and government supporters were intimidating potential voters.

The complaints, aired at a news conference held at Khaled Ali’s campaign headquarters in downtown Cairo, suggested that he was struggling to secure the 25,000 signatures, or “recommendations,” necessary to challenge President Abdel-Fattah Sisi, who is widely expected to run for and win a second four-year term.

Alternatively, a presidential hopeful could secure the formal backing of 20 elected lawmakers. But the overwhelming majority of the chamber’s 596 members already have pledged their support to Sisi, who has yet to formally announce his candidacy.

“The battle for the recommendations is the real battle in this election. Either we win together or I fail alone,” Ali told reporters.

Turkey: It is high time for the European Court of Human Rights to step in!

The Arrested Lawyers Initiative has launched a campaign via change.org entitled “It is high time for the European Court of Human Rights to step in!”

Only in last 24 hours 1647 people supported the campaign.

It is high time for the European Court of Human Rights to step in!

The 3-month State of the Emergency regime which was declared immediately after the coup attempt (21/07/2016) by the Cabinet “to preserve the democratic order” has since been extended for five times.

Despite calls by the European Union, the Council of Europe, and the Venice Commission and numerous human rights institutions for the Turkish government to end it, the State of Emergency Regime remains in effect.

In defiance of it purpose, The Turkish government has subversively used the State of Emergency Regime against the country’s democratic parliamentary system, the rule of law and human rights.

During the state of emergency, so far;

It is high time for the European Court of Human Rights to step in! The Chinese government under the leadership of President Xi Jinping expanded its sustained offensive against human rights both at home and abroad in 2017, Human Rights Watch said today in its World Report 2018. The death of the Nobel Peace Prize laureate Liu Xiaobo in a hospital under heavy guard in July epitomized the authorities’ deep contempt for people’s rights. China used its increasing global influence to threaten the protection of rights internationally.

Liu Xiaobo died from cancer in a Shenyang hospital, surrounded by state security, after serving nearly 9 years of his 11-year prison sentence for “inciting subversion.” During his hospitalization, authorities isolated Liu and his wife, Liu Xia, from family and supporters, and denied Liu’s request to seek treatment outside the country. Since Liu’s death, authorities have forcibly disappeared Liu Xia.

In the 643-page World Report, its 28th edition, Human Rights Watch reviews human rights practices in more than 90 countries. In his introductory essay, Executive Director Kenneth Roth writes that political leaders willing to stand up for human rights principles showed that it is possible to limit authoritarian populist agendas. When combined with mobilized publics and effective multilateral actors, these leaders demonstrated that the rise of anti-rights governments is not inevitable.

Beijing subjected more human rights defenders – including foreign nationals – to show trials in 2017. Police tortured detainees to obtain confessions, denied them access to lawyers of their choice, and held them incommunicado for months. Lawyer Wang Quanzhang and activist Wu Gan, who were rounded up in the nationwide crackdown that began in July 2015, remained in police custody. Taiwanese democracy activist Lee Ming-che was sentenced to five years in prison, and lawyer Jiang Tianyong received two years, both for “subverting state power.” 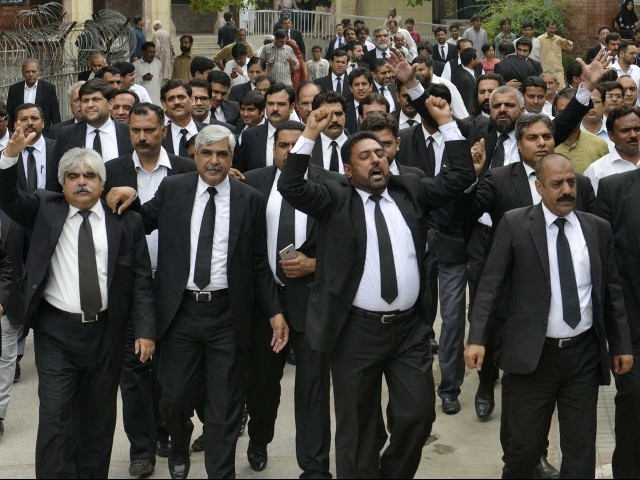 Talking to The Express Tribune, Balochistan Bar Council member Munir Kakar said lawyers are upset over the court’s recent judgment, which has held that Justice Qazi Faez Isa’s findings against former interior minister Chaudhry Nisar Ali Khan are not to be treated as findings of the apex court.

Iryna Nozdrovska’s trip home on December 29 should have been routine: a short walk from her Kyiv office to a subway station, then a 31-minute ride north before taking a bus to the village of Demydiv, where it stops 150 meters from her home.

But the crusading human rights lawyer never made it.

Her body was found on New Year’s Day floating in the shallow Kozka River just a kilometer down the road. She had been stabbed multiple times in what police described as a “violent death” and “revenge killing.”

On January 17, the Interior Ministry and police released security-camera footage showing the last images and movements of Nozdrovska, who was 38.

The video, published on the personal Facebook page of Interior Ministry spokesman Artem Shevchenko, shows Nozdrovska walking in a heavily policed government district at about 3:40 p.m., before arriving at the Khreshchatyk metro station two minutes later. Nozdrovska, wearing a brown winter coat, does not appear to be in distress in the footage.