English PEN, along with Amnesty International and Reporters Without Borders, will stage a lunchtime vigil on 9 January 2018 from 1 to 2pm at the Saudi Arabia Embassy in London, for the jailed Saudi Arabian blogger Raif Badawi, to mark three years since he was given 50 lashes.

Mr Badawi, a  father-of-three who was detained more than five years ago, has been sentenced to ten years in jail and to be flogged 1,000 times for setting up a website focused on social and political debate in the country.

After Badawi was given his first batch of 50 lashes in a public square in the city of Jeddah on 9 January 2015, an international outcry appears to have led to the indefinite postponement of further floggings being carried out.

The blogger’s wife Ensaf Haidar, who lives in Canada, has led a high-profile campaign calling for her husband’s release. However, Badawi remains behind bars in Saudi Arabia.

Amnesty has long considered Raif Badawi a prisoner of conscience and has been critical of the UK Government for failing to speak out strongly about his case.

Amnesty is also raising the plight of Badawi’s lawyer, Waleed Abu al-Khair, who has also been jailed for 15 years – on various spurious charges, including “disobeying the ruler and seeking to remove his legitimacy”. 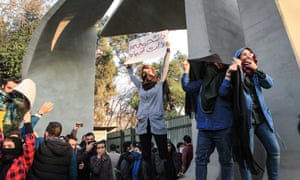 Human rights activists in Iran have raised concerns about mass arrests during the country’s largest protests in nearly a decade after at least three demonstrators died in a notorious Tehran jail.

Two members of the Iranian parliament close to the reformist camp confirmed on Monday that one detainee, Sina Ghanbari, had died in Evin prison.

Separately, Nasrin Sotoudeh, a prominent human rights lawyer, told the Guardian on the phone from Tehran that at least two other protesters had died in the jail. They have not yet been identified.

“I spoke to a prisoner in Evin prison and I was told that three detainees had lost their lives,” Sotoudeh said. “When authorities resort to mass arrests, they cannot claim to protect their rights. It is not possible in such a situation for the judicial process to take its due course.”

Sotoudeh said she was concerned about the prisoners’ legal representation at a time when many human rights lawyers were in jail, exiled or vilified.

A public prosecutor’s office in the northern province of Tokat issued arrest warrants for 34 suspects, including 19 soldiers, on Jan. 8 for alleged links to the Fethullahist Terrorist Organization (FETÖ), according to a judicial source.

The suspects include four FETÖ imams in the military, said the source, who spoke on condition of anonymity due to restrictions on talking to the media.

The provincial gendarmerie command units launched an operation across 17 provinces to arrest the suspects.

In a separate ruling, the same office issued arrest warrants for 11 other people, including judges, prosecutors and lawyers, as part of an ongoing investigation into “the working houses of FETÖ-linked judges and prosecutors.”

FETÖ and its U.S.-based leader, Fetullah Gülen, are widely believed to have orchestrated the July 15, 2016 defeated coup attempt.

Ankara also accuses the Gülen network of being behind a long-running campaign to overthrow the state through the infiltration of Turkish institutions, particularly the military, police, judiciary and schools.