An İstanbul lawyer, identified only by the initials O.E.H., was put in pretrial detention along with her 3-month-old baby as part of an investigation into the faith-based Gülen movement, local media reported.

According to the TR724 online news website, O.E.H. went to the Tokat police station upon a Dec. 27 call regarding a probe. The prosecutor in charge requested her arrest, claiming that she might try to avoid investigation although O.E.H. had voluntarily complied with the police notice.

TR724 reported that O.E.H. was put in pretrial detention on Dec. 29 with her 3-month-old baby after spending two days in police custody.

More than 17,000 women in Turkey, many with small children, have been jailed in an unprecedented crackdown and subjected to torture and ill-treatment in detention centers and prisons as part of the government’s systematic campaign of intimidation and persecution of critics and opponents, a report titled “Jailing Women In Turkey: Systematic Campaign of Persecution and Fear” released in April by SCF has also revealed.  At least 700 children under the age of 6 have accompanied a parent in jail as they had no one to look after them on the outside.

China: Perseverance Will See Us Through — A 2018 New Year’s Message From the Chinese Human Rights Lawyers Group

It is with a heavy heart and a sense of desolation that we begin our New Year’s dedication, just as China is shrouded in smog and enveloped in haze. But regardless of the challenges and suffering of the past year, we have not cowered. We continue to hope that 2018 will bring us closer to freedom. We also wish that our own hope will become infectious, and that the citizens of China will together fight for a free, beautiful future and country.

2017 was again a year of no shortage of injustice and wanton violations of the law by the country’s judicial organs. Ugly words such as suffocation, shackles, and dungeons tested our resolve; deaths, disappearances, and bloodshed caused us enormous pain. Though we see no justice and feel no freedom, our faith girds us to continue to persevere — to wait for conscience, to wait for strength, and to await the arrival of spring.

2017 was the year in which we lost a great intellectual of liberty, Liu Xiaobo (刘晓波). He left the world with the saddest dirge, and while alive he expounded in his works, and demonstrated in his life, the incorruptibility, uprightness, and patriotism of the Chinese intellectual. His soul returned to the sea where waves will carry his dream of a free China forever.

2017 saw the persecution of numerous human rights lawyers. Jiang Tianyong (江天勇), Li Heping (李和平), and Xie Yang (谢阳) were all convicted on false charges. Wang Quanzhang (王全璋) was illegally held incommunicado for a cumulative 900 days. The persecution of Li Yuhan (李昱函) has been relentless. All of these cases show just how harsh and dangerous it has become to be a human rights lawyer in China.

In 2017, a large number of lawyers were threatened, coerced, and silenced by local judicial bureaus and legal associations, including Zhu Shenwu (祝圣武), Wu Youshui (吴有水), Wen Donghai (文东海), Wang Liqian (王理乾), Wang Longde (王龙德), Yu Wensheng (余文生), and Peng Yonghe (彭永和). For no more than exercising their freedom of expression and proactively defending the interests and rights of their clients, these lawyers were made targets of harassment — and in some cases subject to sanctions by the official lawyer’s association, or administrative penalties. This entirely contradicts the claims of officialdom that China is a country ruled by law and that human rights are guaranteed.

On 26 December, the Tianjin No. 2 Intermediate People’s Court handed down a verdict for renowned human right defender Wu Gan was charged with “Subversion of State Power”. Wu was sentenced to 8-year imprisonment and 5-year deprivation of political rights.
On the same day, human rights lawyer Xie Yang was also convicted of “Inciting Subversion of State Power”. The Changsha Intermediate People’s Court in Hunan, however, spared Xie from criminal punishment as he was deemed “not having yet caused severe social detriment” and that “he had pleaded guilty”.

The two instances, one freed and the other imprisoned, demonstrated the utter cruelty of the Chinese government in oppressing the dissidents. In fact, since the nation-wide crackdown on human right lawyers and defenders starting 9 July 2015, many have experienced long-term secret incarceration, suffered tortures and intimidations. In the case of Xie Yang, for instance, he had testified his ordeals through his lawyers. He was put under fatigue interrogations, deprived of sleep, beaten up, insulted, given death threats, and was subsequently forced to admit guilt and to express remorse. After his first trial on 8 May this year, Xie Yang was granted bail but in reality he was held under house arrest and was subjected to various forms of surveillance. On 26 December when he turned up in the court to plead guilty again, he had the criminal punishment lifted from him.

Quite on the contrary, Wu Gan refused to plead guilty. In August this year, Wu was trialed in a closed-door hearing in the Tianjin No. 2 Intermediate People’s Court, which claimed that Wu had confessed and admitted crimes. However, prior to the trial this time, Wu told his lawyers, “Under the rule of the great, glorious and righteous (Chinese Communist Party), I would feel bad if I am not portrayed to have confessed… A verdict of conviction issued by a despotic regime is indeed a shiny trophy for a fighter of democracy and freedom.”

The arrest and prosecution of Xie and Wu are the latest evidence of oppression of the dissident by the Xi regime. Xie Yang, as human right lawyer, has been assisting dissidents and victims of rights violations including farmers who lost their land, tenants of forced evictions and the Falun Gong practitioners. He was threatened and physically attacked during his practice but he was always defiant, which subsequently resulted in his arrest in July 2015 as part of the Crackdown.

Wu Gan called himself the “Super Vulgar Butcher” with his butcher’s knife pointing at the systemic corruption and injustice. With performing arts that came deliberately close to being vulgar, Wu strongly denounced the injustice embedded in the Communist regime. He strived for the justice of the powerless. In the well-known case of Deng Yujiao, for instance, Wu intervened to revert the fate of a victim of rape who was about to be charged for killing her perpetrator in an attempt to defend herself. Wu gathered public opinion online, organized protests and art performances to express his discontent. He insisted to exercise his civil rights and pursue his freedoms to petition and to express himself, rendering himself thereby a traitor in the eyes of the regime.

The court has condemned him as having “used the internet for long time to disseminate large amount of speeches, attacked the State and the constitutionally endorsed political system in an attempt to promote the ideas to topple and to subvert state power…. using “rights-defence” and “performing arts” as disguise. … to defame the state apparatus and attack the system erected by the Constitution.”

It is worth noting that both Wu and Xie have been veteran participants in the human rights movement. For Xie, he has engaged himself in a number of human rights cases since his practice in 2011. Wu for his part began his online advocacy for rights defence almost a decade ago. Even though they both were greeted with harassments and intimidations, there was still space, albeit limited, to manoeuvre. However, after Xi Jinping took power, the civic space has been further squeezed and dissenting voice further suppressed. He has on one hand arrested in large scale and on the other, strived to destroy the will power of the dissidents by exerting pressure both physically and psychologically via means of long detention, torture and threat on the wellbeing of their family members. They would be forced to admit guilt, to remorse, and be a puppet in the court to take in all insults and degradations so that the Chinese government could retort criticisms and pressure from the international community. Henceforth, after the 709 Crackdown in 2015, court hearings were not duly arranged for the arrested until one year later when they were either granted bail or trialed one by one. But for Wu Gan who has defiantly declined to plead guilty, he was given a harsh sentence of 8-year imprisonment.

In fact, the communist China has employed the tactics of “No court trial unless plead guilty; and no light sentence without confession” to agonise the political dissidents and their families. Prior to Wu and Xie, there were Jiang Tianyong, Zhou Shifeng, Hu Shigen, all forced to their knees. To date, lawyer Wang Quanzhang has remained incommunicado for more than 28 months after he was first detained. And for the activists for democracy, Qin Yong-min and Huang Qi are likely to be put under indefinite incarceration as they have refused to cooperate. Qin’s wife has simply vanished from earth’s surface, similar to the situation of Liu Xia. It is such huge hypocrisy when Xi Jinping uttered the words “rule by law”.
The tyranny of the Communist regime is appalling. We express our respect to those who have been forced to plead guilty by torture. We salute those who stood firm even in agony. Xi’s regime sees people as its enemy and framing them up for the crime of Subverting State Power. It fools its people by the cultural revolution-type of apotheosis, which will only highlight its frailty and fear for people in its heart!

Pakistan: Over 0.2m cases could not be heard due to lawyers’ strikes: LHC chief justice 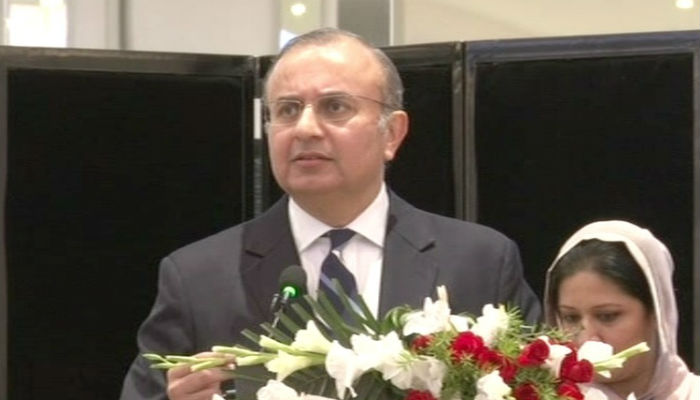 Lahore High Court Chief Justice Mansoor Ali Shah criticised Sunday the frequent strikes by the legal fraternity, and shared that the lawyers should only protest issues they deeply care about.

Sharing statistics, he pointed out that 240,000 additional cases could have been heard if it weren’t for 3,040 strikes by lawyers in 2017.

While addressing an event in Lahore, CJ LHC remarked that it makes no sense for lawyers to protest issues which do not relate to Pakistan.

Most recently, the legal fraternity boycotted courts following the suicide attack in a church in Quetta, which claimed nine lives. Before, the lawyers had staged a demonstration against US President Donald Trump’s move to recognise Jerusalem as the capital of Israel.

Lawyers in Multan protested for seven consecutive days recently over the shifting of the judicial complex. The protest ended after Chief Justice of Pakistan Saqib Nisar ruled to reopen the old judicial complex until adequate facilities are ensured in the new complex.