(N.B. Law professor Istar Gozaydin was acquitted today on the charge of intentionally and willingly helping a Gülen “terrorist” organization without being a member of the organization, punishable by a penalty of from 7 1/2 to 15 years in jail.  Last year she was detained for 3 1/2 months.)

A Hong Kong group has staged a rally calling for the release of Chinese human rights lawyers detained by mainland authorities.

Fifteen members from the China Human Rights Lawyers Concern Group took to the streets on Tuesday.

They marched up to the Chinese government’s liaison office in the territory, chanting that the lawyers are not guilty. They demanded the release of Yu Wensheng and other Chinese human rights lawyers in front of the office.

Yu, a Beijing-based lawyer, was held under police custody on January 19th. He had posted an open letter that said the head of state should be chosen from multiple candidates in open elections. He is suspected of “inciting subversion of state power.”

In 2015, Chinese authorities took into custody or questioned more than 200 human rights and other activist lawyers. Chinese leaders are intensifying their crackdown on human rights lawyers in the past years.

The head of the support group, Albert Ho, said the group strongly protests such a prolonged crackdown. He pointed out that President Xi Jinping has been keeping people who oppose him under long detention periods, and they violate China’s Constitution. 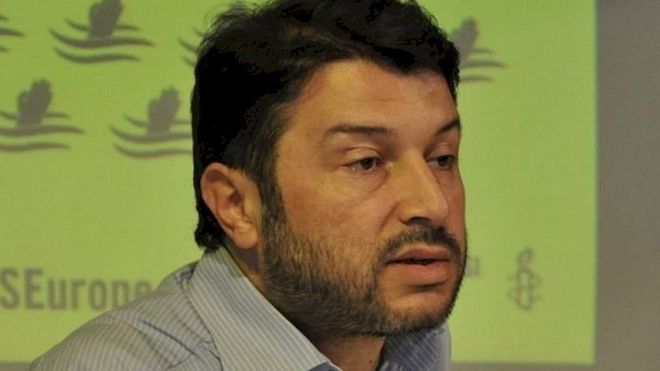 A court in Istanbul has ordered the release of the head of human rights group Amnesty International in Turkey, who was detained last June.

Taner Kilic had been charged with membership of a terrorist organisation, an accusation the London-based group had described as “baseless”.

The court ordered his release on bail. Ten other activists are also on trial.

The arrests were part of a crackdown following the failed coup attempt of July 2016.

In a statement, Amnesty welcomed Mr Kilic’s release, but said it would continue to pressure for the charges against the 11 activists, including another Amnesty member, to be dropped.

Gauri van Gulik, the group’s Europe director, said: “These unfounded prosecutions are an attempt to silence critical voices within Turkey but have only served to highlight the importance of human rights and those who dedicate their lives to defending them.”

Greece/ECHR: J.R. AND OTHERS V. GREECE: A DANGEROUS PRECEDENT FOR HUMAN RIGHTS LAWYERS IN EUROPE

On 25 January 2018 the ECtHR issued its Judgement in the case J.R. and Others v. Greece.
Despite other aspects of criticism one may have about this Judgement (and these are many), the Human Rights Defenders Support Network alerts on what is clearly a dangerous precedent for human rights lawyers in Europe, regarding the art.34 ECHR complaint (par.148-153 of the Judgement) “added” by the German Lawyer representing the applicants at the Observations stage.

Some months after the ECHR application was lodged, the 1st applicant was called to the police station of hios, where he was made to answer questions under oath about the EHR application he had lodged and about his contacts and his correspondence with his lawyer. He claimed that his summoning and the interrogation he was subjected to had an intimidating effect on him and that these events cannot be interpreted differently than an attempt to dissuade him from continuing with his application.

The Government declared that in establishing the facts of the EHR case, it estimated as necessary to verify the duration of the applicants’ stay (sic) in Vial and where they stayed after leaing Vial, that allegedly being the only reason why the 1st applicant was called to have “a conversation” with a policeman, in the presence of an interpreter. The reiterated that the Greek authorities facilitate the exercise of art.34 ECHR right to any person in their territory and, in particularr, by orregular migrants finding themselves in detention and “reception” centres.

Parliamentary Assembly of the Council of Europe’s (PACE) has called for the release of Amnesty International’s (AI) Turkey chair Taner Kilic, under arrest for more than 7 months now.

In a written statement issued a day before Kilic’s court appearance on Jan 31, PACE’s co-rapporteurs for the monitoring of Turkey, Marianne Mikko (Estonia, SOC) and Nigel Evans (United Kingdom, EC) reiterated their call for the right defender’s release.

“Taner Kilic, like any other individual, should feel safe and secure to express himself and assemble in Turkey. We urge once again the Turkish authorities to ensure that these fundamental freedoms are duly and effectively secured, and put an end to the continuous arrests and detentions of those expressing dissenting and critical opinions, which cannot be a crime in itself”, they said.

”In this context , we are deeply concerned about today’s arrest of Turkish Medical Association board members, including its chair, as well as hundreds others for criticizing Turkish military intervention in Afrin. We call on the Turkish authorities to act and react in full respect of Council of Europe standards”, the co-rapporteurs also added.

Kılıç, a lawyer, a founding member of AI Turkey and chairman of its board of directors since 2014, was arrested by an İzmir court on June 9 as part of an investigation into the Gülen group. Set to appear during a court appearance on Wednesday, he faces terror charges along with 10 other rights defenders who could be jailed up to 15 years if convicted.

We are live from outside the Istanbul Penal Court – where our friends and colleagues İdil Eser, Taner Kiliç and 9 other human rights defenders have their third hearing in an ongoing criminal trial against them. We are also talking to prominent human rights defender and lawyer, Gunal Kursun who is also standing trial today. Human Rights Watch’s Alison Des Forges Award celebrates the valor of individuals who put their lives on the line to protect the dignity and rights of others. Human Rights Watch collaborates with these courageous activists to create a world in which people live free of violence, discrimination, and oppression.

Ivan Pavlov is a human rights lawyer and activist in Russia, defending those wrongly accused by security services of disclosing state secrets, high treason, and espionage. He is also well-known for his tireless efforts to ensure public access to government information and to provide guidance to activists threatened by the state. Pavlov has persevered against overwhelming odds, including intrusive government surveillance, harassment by security officials, and work-related threats of violence. He has taken on numerous high-profile cases, saving many clients from long jail sentences and political repression.

In 2004, Pavlov founded the Institute for the Development of Freedom of Information (IDFI) – with the aim of monitoring public access to socially significant information and pressuring key state institutions to make information related to their activities available online. In 2014, the Russian government designated IDFI a “foreign agent” under the 2012 repressive law, which demonizes foreign-funded advocacy groups as foreign agents. Undeterred, Pavlov continued his work by forming Team 29, an informal association of human rights lawyers. Team 29 provides free consultations and legal aid to individuals asserting their right to receive and distribute information, defends victims abused by law enforcement and security agencies, and publishes user-friendly advice for activists and others who face harassment, arrest, searches, interrogation, and recruitment attempts by security officials. An atmosphere of grief and melancholy, Monday, January 29, 2018, enveloped the South West Region when the Minister of Communication, Issa Tchiroma Bakary, during a press conference in Yaounde, revealed that the Nigerian Government has finally handed over some Anglophones arrested in Nigeria to the Cameroon Government to face the music of law.

Among those extradited were leaders of the Interim Government of the Federal Republic of Ambazonia led by the President, Sisiku Julius Ayuk Tabe.

Tchiroma’s January 29 press conference finally shed light on the whereabouts of the leaders who were arrested at Nera Hotel in Abuja, Nigeria on Friday, January 5, 2018, and held incommunicado.

Before the Communication Minister’s outing on Monday, French media organs like France 24, TV 5 Monde, Vision 4 and other print media were already awash with reports that the Ambazonian leaders were already in Yaounde, while both the Government of Nigeria and that of Cameroon maintained sealed lips.

After Tchiroma’s confirmation, the hitherto busy South West Regional capital, Buea went dead. Most tax drivers in circulation grounded their cabs and the general mood of the Region was like a national day of mourning.

It would be recalled that Sisiku Ayuk Tabe, Dr. Nfor Ngala Nfor, Dr. Fidelis Nde Che, Dr. Henry Kimeng, Prof. Awasum, Dr. Cornelius Kwanga, Tassang Wilfred, Barrister Eyambe Elias, Dr. Ojong Okongho and Barrister Nalowa Bih, were arrested in Nigeria while they were holding a meeting to discuss about the plight of thousands of Anglophones who have fled to Nigeria as refugees in the wake of the socio-political crisis rocking the country.