Lawyer Hakim Peker and Gurkan Istekli who were taken into custody on November 14, 2017, have not been either referred to court or been released yet. Under state of emergency rule, custody term can be extended up to 14 days.

Lawyer Yaprak Türkmen and intern lawyer Buket Yılmaz who are members of People’s Law Office and Progressive Lawyers Association that was shut down with an emergency decree, were arrested on 20 and 22 December. Thus the number of lawyers who have been raised since 15th July raised to 570. Presently, 19 lawyers of the People’s Law Office have been under arrest. 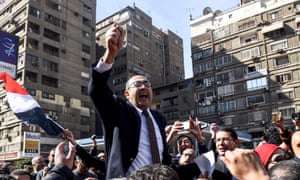 Khaled Ali is an unassuming sort of revolutionary. Dressed in a tweed jacket, his formidable eyebrows arching over thick-rimmed glasses, he could be mistaken for a substitute teacher rather than a firebrand lawyer and hopeful presidential candidate in Egypt’s forthcoming election.

“I’m seen as a traitor funded from abroad,” he said, shrugging off the criticisms levelled at him by Egyptian media and pro-government figures.

Ali’s platform, a mix of welfare proposals including expanded health insurance and a minimum wage, is reminiscent of socialists who’ve broken into mainstream politics elsewhere, such as Bernie Sanders or even Jeremy Corbyn. Does he see himself in the same tradition? Ali gives his only interview response in English: “I am Khaled Ali.” Then he laughs.

Yet Ali might be the closest thing that Egypt has to David confronting Goliath. He is currently one of four potential candidates to declare their intention to run against Egypt’s strongman president Abdel Fatah al-Sisi in the country’s presidential election due in spring 2018, but perhaps the only one with a chance of competing.

A Chinese human rights activist who went by the online name “Super Vulgar Butcher” and made public shaming of officials a raucous art form was sent to prison for eight years after a court declared him guilty of subversion on Tuesday after an earlier, secretive trial.

The activist, whose real name is Wu Gan, became renowned among rights advocates for helping organize boisterous protests outside courthouses and government offices to support plaintiffs and defendants who accused officials of abusing their power. Mr. Wu, easily recognized by his shaven head and goatee, relied on social media, a wide and fluid network of online supporters and abrasive mockery to spread his message.

The verdict underlined how under President Xi Jinping, determined activists like Mr. Wu, who once survived at the edges of official tolerance, have come under concerted attack from the police, prosecutors and courts, with the state news media often acting as a cheerleader.

709 案迄今最重判刑
By far the heaviest sentence in the 709 Crackdown

Wu Gan, activist and staff member of the Beijing Fengrui Law Firm, has been sentenced to 8 years imprisonment and deprivation of political rights for 5 years by the 2nd Tianjin Intermediate Court this morning, by far the heaviest sentence in the 709 Crackdown. We was detained in 2015 and was trialed in August this year for subversion of state power.

Our positions on the trials of #WuGan (#SuperVulgarButcher) and #XieYang. And the heavy sentence imposed on Wu Gan is deplorable.

Reacting to the news that human rights activist Wu Gan had his verdict and sentenced to eight years’ imprisonment on 26 December in Tianjin while human rights lawyer Xie Yang had his trial reconvened and was exempt from punishment in Changsha on the same day, Amnesty International’s China Researcher Patrick Poon said:

“It is disgraceful that the Chinese authorities have chosen the day after Christmas to deal with two of the remaining people left in legal limbo from the unprecedented July 2015 crackdown on human rights lawyers and activists. Carrying out unfair trials and politicized sentencing of human rights defenders at the very time when diplomats, journalists, international observers and the general public are less likely to be able to respond reeks of a cynical political calculation”.

“By trying to avoid scrutiny from the press and the international community, the Chinese government betrays the fact it knows well these sham trials cannot withstand scrutiny”.

“Both Wu Gan and Xie Yang should never have been detained for merely exercising their right to freedom of expression.”

China has a history of engaging in politically-motivated actions against well-known activists during the Christmas holidays. Prominent Chinese dissident Hu Jia was detained on 27 December 2007. Liu Xiaobo, who would later win the Nobel Peace Prize but deceased in detention in 2017, was sentenced to 11 years on Christmas Day 2009 on the charge of “inciting subversion of state power”. Both the cases of Xie Yang and Wu Gan received considerable attention in China and abroad.

On 9 July 2015 the Chinese government launched an unprecedented crackdown on human rights lawyers and other activists. Over the following weeks, almost 250 lawyers and activists were questioned or detained by state security agents, and many of their offices and homes were raided. In addition, family members of those detained were also subjected to police surveillance, harassment and restriction of their freedom of movement.

Wu Gan has been detained since May 2015 while Xie Yang was detained in July 2015 and was released on bail after he admitted to the offences at a trial in May 2017.